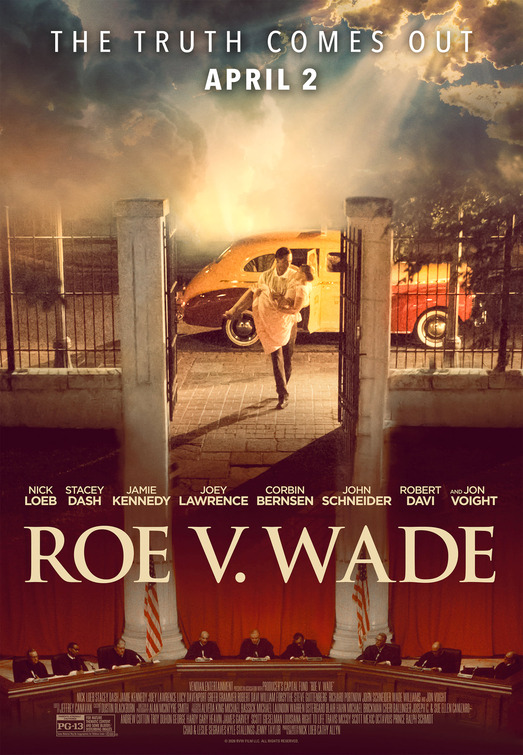 The issue of abortion remains one of the most hotly debated issues in modern politics. Since the 1973 passage of Roe vs. Wade in the United States, abortion has been a constitutionally protected right and 61 million procedures have been performed. Pro-Life Christian and non-Christian groups alike have struggled to find a voice within the modern pro-abortion political climate that has seemingly dismissed their side as sexist and authoritarian.
Even in the church the issue remains contentious within a minority of pro-choice feminist Christians who vocally disagree with the church’s public pro-life stances. As such, it can be nerve-wracking to talk about it in any context.
I don’t like talking about politics here on Geeks Under Grace but that’s a formality I’m gonna have to forgo for the sake of a review like this. There’s NO way to talk about an abortion film without addressing the political movements underpinning why a film like this gets made…

Violence/Scary Images: Several fetuses are depicted on screen with a few moments of blood and viscera.
Language/Crude Humor: Some language and crass discussion throughout the film.
Drug/Alcohol References: Casual drinking depicted.
Sexual Content: Characters reference sexual liberation, out-of-wedlock sexuality.
Spiritual Content: The film deals with the political influence of the Catholic church and several characters in the film convert to Christianity.
Other Negative Content: Most characters are portrayed as being very morally binary and unsympathetic, or too rigidly wholesome and uncomplicated.
Positive Content: Themes of preserving human life and preserving human rights.

Disclaimer: Geeks Under Grace was given a screener copy of the rough cut of the film by its producers to review.
It’s surprising that a movie like Roe v. Wade has been made at all. Hollywood is notoriously pro-choice and doesn’t make much quarter for pro-life films. When they address it, it’s in films like Unpregnant, Saint Frances and Never Rarely Sometimes Always that lionize abortion. Even Hollywood though is gun-shy around the issue and only really addresses it in indie films. You’re never going to see a Star Wars film addressing the topic (God willing…).

That said, there’s been a minor move amongst conservative/Christian independent filmmakers in the past few years to try and create pro-life stories that can try and turn the needle. 2018’s Gosnell was a box office flop but had a few minor Hollywood names working on it, like Nick Searcy and Dean Cain, to award it some legitimacy. 2019’s Unplanned was a minor cult hit that made back its budget nearly three-times over but didn’t penetrate deeply outside of pro-life circles already familiar with the works of Abby Johnson.
What little mainstream attention the latter received was negative. As The AV Club wrote, it was a film filled with “the untruths, cinematic manipulation tactics, and undiluted hysteria”.

Roe v. Wade is the third film in the trend, although the film has been in production and mired in controversy since 2018. It was produced very secretively, on the cheap, and financed by politically sympathetic donors. The film’s script was largely withheld from cast and crew till right before shooting which caused walk-offs, and several locations revoked their shooting permits once the film’s premise leaked. Early scripts also played up the gore and right-wing talking points, most of which were trimmed for the film’s premiere.
The film eventually premiered last year at the Vienna Independent Film Festival before screening at CPAC in January.
The movie is definitely a first-time film for the directors involved. Nick Loeb, the film’s producer and co-director, isn’t a Hollywood amateur. He’s a credited actor in films like Primary Colors, Day of the Dead: Bloodline, Den of Thieves and The Brawler. He’s also produced a handful of documentaries. He clearly knows his way around a film set. Sadly, his work alongside his co-writer/director/producer Cathy Allyn reflects an inexperienced hand behind the camera (although the production design looks more expensive than the 6.5 million they spent on it so good on them for that!).
Admittedly, the version I’m watching is a rough cut with temp-music and rushed ADR dialogue recordings, so I’m judging the film on a curve. Hiccups in the dialogue, sound effects and music are understandable when the film is still in the editing bay. Alas, I’m not sure they were the best hands to ground the production in a solid narrative foundation. The film’s script is decent in parts, insofar as it’s about as well-conceived as Gosnell or Unplanned, but the film compromised itself in the same way as both of those movies: it’s a film designed to preach to the choir.

There is no way a film like Roe v. Wade would ever play to a pro-choice audience or convince them to change their minds. It’s too antagonistic and littered with too much right-wing rhetoric. It’s even peppered with cameos of right-wing activists like Mike Lindell, Roger Stone, Toni Lahren and Milo Yiannopolis. It’s hard to not say the film is functioning as a work of pro-life propaganda when the film’s talking points, cameos and financiers are all on the same side.
That’s a shame because the actual ideas underlying the narrative are interesting. The story is intended as a docu-drama about the battle between women’s liberation and pro-life activism in the 1960s. Conceptually, that makes for a great dramatic setup. If someone did want to make a drama about the ideological tensions of the pro-life/pro-choice debate, that’s how you’d want to set it up. Even if you wanted to specifically make a pro-life film, giving a pro-choice antagonist a sympathetic background is how you’d need to start if you want to emotionally convince an ideological opponent.

The film stars Nick Loeb as the film’s nominal protagonist/antagonist Dr. Bernard Nathanson, a pro-choice activist from New York who watches his young girlfriend go through the emotional turmoil of an illegal abortion (which he himself performs as a young doctor) and pledges his career to legalize abortion across the United States. The film smartly starts by giving Nathanson a very sympathetic backstory but it quickly turns into rewriting his role in the story as a Machiavellian power monger who somehow controls the entire news media and entertainment industry. His arc and the eventual realization that he’s made a mistake form the film’s entire narrative.
The film doesn’t quite give him the humanity it needs to fill the character out. He’s too callous at times and he’s surrounded by too many chronic liars, manipulators, anti-Catholics and misanthropes to feel like he’s merely stumbling into a larger situation.
The film is even framed as an expose by this character. The real-life man eventually changed sides and created the 1984 anti-abortion documentary The Silent Scream. The prologue involves Dr. Nathanson revealing his involvement with a series of lies at the foundation of the Roe vs. Wade Supreme Court decision: namely that the real-life Jane Roe signed a false statement claiming she’d been raped and forced to carry the child to term that served as the legal leverage that swayed the Supreme Court in favor of legalizing abortion protections.

For a film that’s nominally trying to be an even-handed debate about the pros and cons of abortion, the film is so nakedly pro-life that it can’t help but feel like overt propaganda. It has a few moments of honesty of course. The Pro-Life side is depicted as intermittently cynical and even portrays the minor background power-politics of the Supreme Court that resulted in the case being relitigated in a minorly negative light. Even so, it’s not enough. The good guys are too good and the bad guys are too bad.
At times the rhetoric of the pro-life characters are so strident that the abortion activists arguing with them about constitutional limitations and women’s rights to bodily autonomy appear more logically sound in comparison (even the film’s Henry Wade character gets mad that his lawyers can’t put up a good argument in court).

You wouldn’t be able to convince anyone with argumentation and rhetoric like this in real life. At one point, Bernard even says “We exploited women for women’s rights. But hey, anything for a good cause” and sings a horrific song about why abortion is a good thing.
I’m not saying one way or the other whether the film should’ve been pro-life or pro-choice. That’s not my job as a film critic, even one with opinions that decidedly agrees with the film on the margins. I’m just saying that contentious issues need to be debated contentiously. Delicacy goes a long way in films like this. By its own merits, Roe v. Wade is an indelicate film. If you’re pro-choice, you’re going to hate this film with the seething disdain that atheists hate films like God’s NOT Dead. If you’re pro-life, you’ll probably find it inoffensive.

Roe v. Wade isn't going to change anybody's mind. While it is well-intentioned insofar as its ambitions to tell a "just the facts" narrative are concerned, it's executed with rhetorical abandon to the point where it can't help but feel like right-wing propaganda.