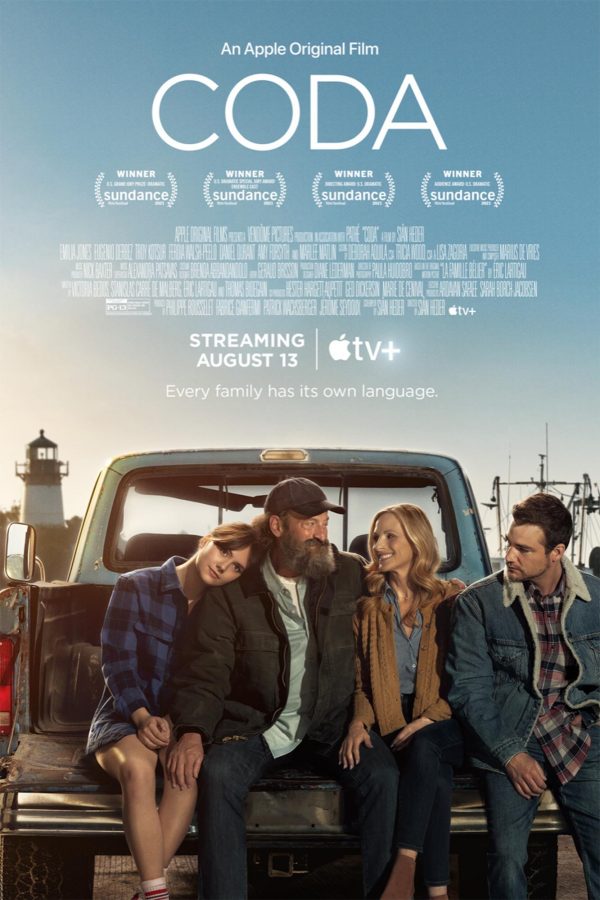 Premiering at the 2021 Sundance Film Festival, CODA, like most award-winning independent films, found its success on the festival circuit. An American adaptation of the French movie, La Famille Bélier, where producer Philippe Rousselet stayed on for the international project, CODA was instantly a hit, taking out four awards at Sundance including the Grand Jury Prize, and gained distribution on Apple TV+. From there it seemed like a dream run, placing frequently in some of the best film festivals in the world. With a smooth Oscar campaign, it snuck by some of the more pronounced contenders for the Academy Awards’ Best Picture category, and became the acclaimed highlight of the evening.

It may have flown too under the radar for many, so let’s take a closer look at this award-winning film.

Violence/Scary Images: There are a small handful of angry/aggressive altercations, one of which leads to a brief fistfight.

Language/Crude Humor: Swearing and crude descriptive phrases are relatively frequent, some of which are subtitled from ASL. The f-bomb is dropped, along with a few s-words.

Drug/Alcohol References: Alcohol is consumedsocially by adults. Cigarette smoking is present. One character smokes marijuana though they claim it’s for medicinal purposes. There are a few jokes about smoking bongs, some coming from teens.

Sexual Content: Numerous conversations about sex; contraception, hooking up over Tinder, needing to be abstinent due to medical issues, comments on genitalia. A married couple can be heard having loud sex—it’s an act which is later mocked and discussed. A young adult couple passionately make out, and it’s hinted they go further.

Other Negative Content: Some bullying and ostracizing of the deaf community is present.

Positive Content: The film is renowned for its exploration of some of the issues that deaf/hearing impaired people face, and soulfully presents the plight of all the hard-working characters. They may have their flaws, but most characters are shown to have good hearts and therefore come across as decent role models.

I always love it when a film has a clever title, and CODA has the best one I’ve seen in years. It has two meanings, both of which summarize the key points of the narrative. CODA stands for Child of a Deaf Adult and is one term that can describe protagonist Ruby Rossi’s predicament. In a family consisting of her parents and an older brother, Ruby is the only hearing individual and constantly finds herself playing the role of interpreter for her deaf loved ones as a result.

Coda is also a musical term that denotes the conclusion of a piece and in some ways is symbolic of Ruby’s journey. In her final year of high school, Ruby’s talent for singing is unearthed, and with the guidance and support of a teacher, she’s presented with the possibility of pursuing this gift in college with the hopes of later turning it into a career. Naturally this presents a conflict of interest with the family, as Ruby’s interpretation skills play such a vital part in their day-to-day survival within a society that isn’t easily accessible for the hearing impaired. Whether Ruby decides to pursue her dreams or stay close to help her family, the choice marks a major turning point in Ruby’s life, closing a chapter.

We’ve heard this story before. It’s your typical high school drama, coming-of-age tale. CODA consists of all your key players. There’s the inspiring teacher that offers an amazing opportunity for their student. A teenager that possesses a hidden talent, held back at first by their own internal conflict of questioning self-confidence, before then facing a larger external problem. Lastly there’s the unsupportive family that must be won over to the protagonist’s side. It would be easy to label CODA as derivative if it weren’t for the fact that while this type of story is incredibly familiar, it is one of the better ones to exist.

It’s a simple story told well. Ruby’s central conflict is a lot deeper and more complex than what’s presented in similar films, where the parents are merely against their child from pursuing the arts. In CODA’s case, there’s a nuanced sophistication in how it presents its core conflict, as the characters are well-developed and their relationships to each other aren’t one-dimensional. Some embarrassing scenarios aside, this is a strong family unit that only wants what is best for each other. What holds everyone back is fear: it’s a problem surrounding communication and the need for self-expression, where Ruby is given the opportunity to pursue singing, which is her way of expression, though her dream will come at the expense of her family’s ability to have their voices heard as they have developed too much of a co-dependency on Ruby’s interpretive skills. For a character like Ruby that does truly care for her family, there are no easy choices here, though one must be made. It’s also not a simple matter where her family don’t have faith in her talent unlike in other films; there’s an ever-present irremediable disconnect due to the family’s physical limitations, and it’s bittersweet to watch this family try to support Ruby in a pursuit they’ll never fully comprehend.

With a cast of actors from the deaf community delivering a heartfelt portrayal of the uphill battles they occasionally face when trying to find acceptance within wider society (with Troy Kotsur winning Best Supporting Actor for his role), CODA has been praised for its diversity and representation. Both of those terms can unfortunately generate a bit of an eye-roll these days as they conjure up images of straight-faced businessmen sitting around a boardroom table discussing the best combination of minority groups to manipulate ticket sales, a process completely divorced from artistic integrity. Thankfully CODA appears authentic in its narrative endeavour, where never once does it feel contrived or force fed. While it’s easy to follow, CODA doesn’t talk down to its audience or push an agenda; all plot developments flow naturally from one dramatic conflict to another.

It’s difficult not to recommend giving CODA a watch. It’s one of those easily digestible films that present a relatable dilemma whilst also opening a whole new perspective of the world in a way that only cinema can accomplish. If it weren’t for its sexual content (which is rather direct in its presentation), it would be a solid family film for most ages. Out of the 2022 Best Picture Academy Awards nominations, CODA is the most accessible to general audiences. In a category that was littered with nuanced, slow-paced slice-of-life reflections or envelope-pushing artsy dramas, CODA was the everyman “normal” film in comparison. Unassuming but still solid in all areas, its win is nonetheless a little surprising given its simplicity and lack of perceivable risk.

CODA is not the first film with a plot revolving heavily around the deaf community to attract critical acclaim in recent years. Anime movie A Silent Voice offers a powerful narrative that maturely deals with the topic of bullying, touching on the subject in a more well-rounded fashion than what is seen in CODA. Meanwhile there’s also Sound of Metal; another film that explores the culture of the deaf community, features a double meaning with its title, and was a Best Picture nominee for last year. Sound of Metal was a lot more of your typical Oscar fare, given it’s more of a slow-paced, slice-of-life drama. Like The Father which was also a contender for Best Picture that year, it used film techniques that allowed the audience to experience the world alongside its ailed protagonist. While Sound of Metal isn’t as well-paced as CODA given it falls into a lull in the middle of the movie, it does make bolder choices particularly with its sound design. Its final scene is one of the most impactful moments I’ve experienced in cinema. Indeed, I experienced a deeper connection to both A Silent Voice and Sound of Metal, making CODA the weakest film of the trio.

CODA achieves a lot of things and is strong in many areas, but while its familiarity is comforting, it’s ultimately that generic quality which holds it back. It’s sincere, heartfelt, warm, endearing, and hits all of its emotional beats perfectly, which makes it a lovely film to watch, but it’s a humble story that risks being raved about too much; I want to refrain from hyping it up too much since it’s merely a good presentation of a well-worn narrative. There might be better films that illustrate deaf culture better, and other Best Picture winners have been more memorable and impactful on the cinematic landscape, but CODA is still a great little film that deserves your attention.

CODA’s narrative is treading upon well-worn ground, but it is one of the best examples of the tried and tested coming-of-age, talented teen trope in cinema, expanding representation of the deaf community in the process.