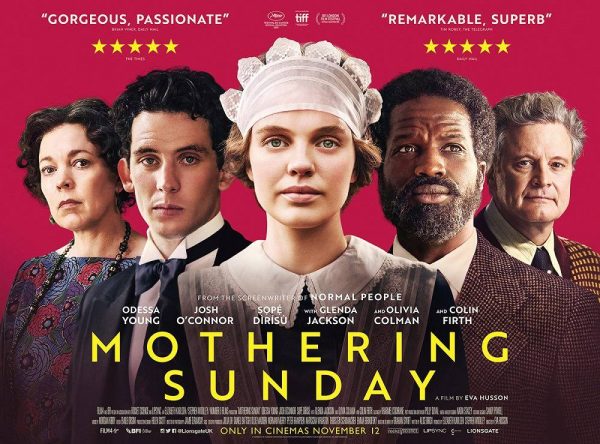 I feel like I’m not in a position to be as charitable to Mothering Sunday as I should be. I’m sick with COVID-19, I’ve barely left my apartment for five days except for the odd grocery run, and all my friends are watching cool action movies like RRR or Ambulance. Here I am watching Mothering Sunday; a nice quiet arthouse drama I’m a bit poorly inclined to enjoy at the moment.

I shouldn’t beat up on Mothering Sunday too hard of course. I like genteel British dramas in the right context. I love Jane Austen adaptations like the recent Emma, and I can’t generally see myself disliking any movie merely for being what it is. Just don’t expect me not to carry my general bitterness into this movie.

The story follows a young maid living in 1924 England. In the years following WWI, she’s taken to having an affair with the son of a local wealthy family who is engaged to marry a friend of the family, much to the antipathy of our young lovers. As the plot progresses, the film cuts to the future where our female heroine Jane has become a successful writer, seemingly on the back of the events of this particular day that the film is set on, and laments the love she felt for that relationship.

Mothering Sunday is a British religious holiday, which Wikipedia describes as a day to honor Mother Churches, “where one is baptized and becomes ‘a child of the church’… On Mothering Sunday, Christians have historically visited their mother church—the church in which they received the sacrament of baptism.“ The symbolism of the name is not hard to catch. It highlights the subversive nature of their relationship—an extramarital affair consummated on a religious holiday—and also highlights the sacramental nature of this relationship to the character of Jane. This particular day, the last day of her affair, was clearly a day that inspired her whole life and haunted her into her age, inspiring her work.

The genre of genteel British drama seems like a natural fit for this kind of subversive premise. British stiff-upper-lip-ism is essential to this kind of story where the surface of all character action has this dense dance of keeping up appearances and putting up a strong facade of proper behavior. Adultery stories are always about the swirling resentments under the surface of properly arranged things and the desire to pursue forbidden passions and pleasures. They’re subversive by their nature.

The result is a film with the radical spirit of Little Women, Gosford Park, and The Favourite, but toned down in tone and content. It’s just as resentful of high society and societal expectations as those films are, but muted to the point where it would otherwise feel like a quiet Austen novel if it wasn’t for the fact that you watch the characters have brief contemplative sex and walk around rich peoples houses with no clothes on feeling bad about themselves.

Evocative as those ideas may be, it’s hardly the best version of them. As RogerEbert.com writes, “the story—as harsh as it is to say this about a movie where many young men are dead and many more are still to die—somehow manages to be both weighty and inconsequential… And although the film hits a variety of emotional notes as it flits across time and space, the events tied to these sensations too often revert to one-note tragedy. On an intuitive, sensual level, “Mothering Sunday” is intoxicating. As a story with plot and characters, it’s nothing we haven’t seen before.”

If I were in a mood I’d say something mean like “Why would I watch the plot of Titanic without the boat in it?” But that would be uncharitable. Mothering Sunday isn’t a bad film; it’s a lovingly filmed drama with some beautiful cinematography. It even comes with some wonderful moments of contemplation and melancholy. Characters reflect on the horrific effects of the Great War and are unable to fully express their emotions about it—a common experience following that war, where trauma was expected to be tucked away and ignored by polite society. Unfortunately, the film doesn’t really strive for the heights of its influences. I can certainly sympathize with a story that chafes against a culture where love and grief aren’t valid emotions to be expressed, although I would’ve appreciated a film less lurid about it. I’m not sure you’re going to appeal to the Downton Abbey crowd with a film like this.

Mothering Sunday is a movie that never fully realizes its ideas but mostly survives on its evocative tone, telling a story about repressed grief and love in a somewhat lurid fashion.