A cooperative take on the guess-the-word genre. 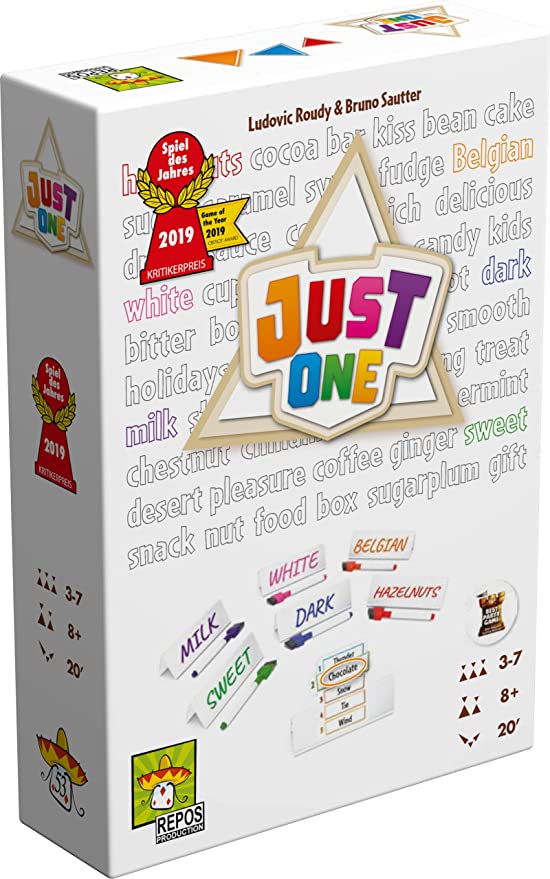 Just One is simple: players randomly draw 13 cards to form the game deck. Each player receives a miniature whiteboard and a marker. On a player’s turn, they become the guesser and will draw a card from the deck, revealing it to other players but being careful not to look at it themselves. On each card are 5 words numbered 1-5. The guesser will say a number between 1 and 5, and whichever word corresponds to the number they said is the word the other players are going to try and get the guesser to say.

It’s simple, but knowing which word to write down as a hint is anything but! Write down an obvious word and risk writing a duplicate, but write down more of a “reach” and the guesser may not guess correctly. Then what if no one else writes down an obvious hint? Oh, the agony (and joy).

The components here are good. The markers hold up well, although some colors smudge more than others (looking at you, purple). The whiteboards work well, and the cards do what they’re supposed to do. While 110 cards seemed like too little to me, there’s also 5 words on each card, so that’s technically 555 options, which suffices for a game like this.

There’s not much in the way of critiques here. Just One is accessible, engaging, and a breath of fresh air in a party genre flooded with cutthroat social deduction games (which I enjoy). An excellent game for family gatherings because you can explain the rules in less than 2 minutes. But be warned: it ain’t easy… but that’s what makes it fun, right?