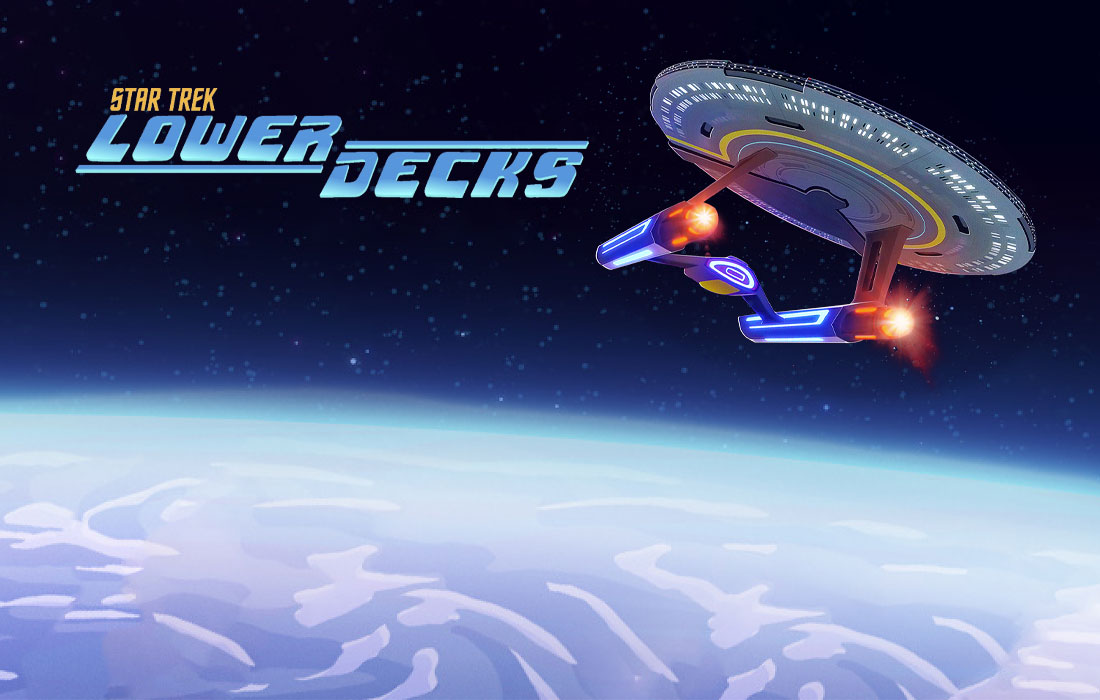 Star Trek: Lower Decks is an animated television show produced and distributed by CBS’s streaming service, CBS All Access. The series is created and executive produced by Mike McMahan. In June 2019, Alex Kurtzman was named the executive and creative producer of CBS’s Star Trek intellectual property. Kurtzman’s contract with CBS was a five year deal to develop an expanded Star Trek universe in an attempt to breathe life back into the franchise. Included in this revitalization deal was a series of new Star Trek serialized shows such as “Discovery” and “Picard,” in addition to a miniseries and animated series.

Kurkzman Brought on Mike McMahan, the head writer of the popular animated sci-fi comedy series Rick and Morty. McMahan’s addition to the project adds a comedic tone to CBS All Access’ first original animated series; this is a major departure from the previous tone of traditional Star Trek properties. Star Trek’s first animated series since the seventies, Star Trek: Lower Decks was announced in the fall of 2018 with McMahan set as its showrunner and executive producer. CBS All Access announced a two season run consisting of 10 episodes, with its first season to be released in 2020.

In the summer of 2019, the creative team announced the series would focus on an all-new cast of characters in the Star Trek universe; however, a few familiar faces – or voices, rather – will make an appearance throughout. McManan also brought on voice talent such as Space Force’s Tawny Newsone, The Boys’ Jack Quaid, Craig of the Creek’s Noel Wells, and Tacoma FD’s Eugene Cordero as the show’s main cast.

Star Trek: Lower Decks premiered on CBS All Access on August 6, 2020 and concluded its first season on October 8, 2020. The series was met with divisive reception. Lower Decks achieved a mediocre Rotten Tomato critical score of 65%, with an even lower audience score of 41%. The series received a Metacritic score of  59 with a User score of 4.4. IGN surprisingly gave the series an eight out of 10 with predominately positive reviews.

The series seems to be lumped in with all the other recent Star Trek properties by splitting fans down the middle. Half of Star Trek fans have accepted and appreciated the direction of the recent Star Trek stories and tone. The other half have voiced their negative opinion on the recent titles, stating a major departure from the lore of Star Trek as their main issue. This major division is similar to what Star Wars fans have recently experienced with the release of the new trilogy distributed by Disney. Upon the release of the 2009 Star Trek movie directed by J.J. Abrams, the Star Trek fan base began to diverge. Lower Deck has become the pinnacle of the fans’ division, as it is also takes a major departure from the sociopolitical themes of the 1960’s Star Trek as it dives into immature slapstick comedy.

Violence: There is some violence throughout the series. There are episodes where characters engage in hand-to-hand combat. Space battles occur throughout, and phasers and other laser guns are used to attack characters. In one episode, characters attempt to attack and eat other characters.

Language/Crude Humor: Some foul language is used throughout some of the episodes. The use of b***h, a**, and some other foul words can be heard. Some adult and suggestive humor is present throughout the series.

Drug/ Alcohol Use: No drug use is present. There is a scene where characters are witnessed drinking in a social club. However, it is not clear whether or not the beverages contain alcohol.

Other Negative Themes: One of the main characters purposely performs poorly in order to avoid promotion, attention, and to never achieve their true potential.

Positive Themes: Friendship is a core theme, as well as relying on the relationship developed as essential to facing difficult challenges.

Star Trek: Lower Decks follows a group of low-level crew members called Ensigns on the U.S.S. Cerritos in the year 2380. The majority of the Ensigns assigned to the star ship work hard and overachieve in order to be promoted out of the lowest positions on the ship. Their tasks are to complete grunt work rarely seen in most other Star Trek titles.

The majority of Star Trek stories follow captains, officers, and high-ranking members of starships and Star Fleet. Lower Decks tells the untold stories of everyday workers and their mundane duties aboard a Federation starship. The series follows Operations Ensign Brad Boimler voiced by Jack Quaid, Security Ensign Beckett Mariner voiced by Tawny Newsome, Medical Ensign D’Vana Tendi voiced by Noel Wells, and Engineering Ensign Samanthan Rutherford. As the U.S.S. Cerritos embarks on its missions, the Ensigns and crew realize there are no small, mundane tasks on a Federation starship. The crew of the Cerritos also come to realize no matter the level of the crew member, anyone can be a hero on any given day.

Lower Decks stands out from current animated properties. Since the series is based in the Star Trek universe, the set pieces, characters, and vessels are wonderfully animated and beautifully designed. The universe of Star Trek is literally out of this world, and the animation style takes full advantage of the opportunity to express its creative license in designs that feature familiar aesthetics. In modern animation, characters who are not engaged in action or conversation are often stagnant and lifeless; however, the characters of Lower Decks are always full of life and in constant motion.

Although the series is wonderfully animated, the same cannot be said for the quality of its writing. The concept of the series is unique, as it focuses on positions in a starship typically not explored. Though the concept is fresh, the writing is inconsistent. The show does eventually find its footing, however. The first half of the series felt clumsy and laborious. The jokes felt forced and Star Trek references from previous properties were thrown out seemingly every minute without any context as if the writers needed to remind the audience constantly that Lower Decks takes place in the Star Trek universe.

Nevertheless, as the show moves into the second half of the season, the story and characters come into their own. The character development of the main cast and ancillary characters starts to take major form. The relationships weakly established in the first half of the series start to take shape, and by the end of the season, the writers no longer rely on name dropping references. The crew of the Cerritos truly feels a part of the Star Trek universe and stands on its own. The story of Lower Decks is ultimately one about about friendship, parenthood, duty, and sacrifice.

All in all, Star Trek: Lower Decks is a passable addition to Star Trek lore. All the jokes may not land well, but they are serviceable. In the later part of the series, they are clever and land with a punch. The drama of the series is eventually fleshed out by the end of the season. When the series stops forcing the connection to the extended universe and allows the crew of the Cerritos to tell their own story is when Lower Decks truly finds its identity as a satire that pays homage to previous Star Trek properties.

To some fans of the traditional Star Trek, Lower Decks may seem disrespectful to the core of the lore of the original series, but other fans may find it refreshing to laugh at some aspects of something you love. Much like roasts of famous celebrities where friends make fun of one of their own, Star Trek: Lower Decks is the celebrity roast of the Star Trek universe. Although the series is ultimately a comedy, rest assured there is a lot of drama and heart riddled throughout, and may even bring on tears at times. Lower Decks is similar to a rose: it’s a pleasure to look at, but also has some thorns that may prick fans the wrong way.

Star Trek: Lower Decks is a satirical comedy within the Star Trek universe. If you are a Star Trek fan who can accept a comedic approach to this beloved franchise, then Lower Decks is for you. The series is a win for any fans of animated sci-fi.