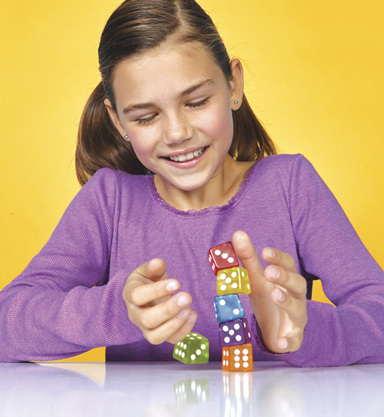 As a long-time player of games, I’ve been familiar with stacking games like Jenga for years. Of course with that title, it’s as much deconstruction of the tower as it is anything else, but people like playing with things that can fall down at any given moment. In recent years, as well, dice stacking (trapping dice in a cup and utilizing inertial force to stack the contents) has produced many a YouTube video. With this fascination of stacking dice, Blue Orange Games created a game that necessitates something besides inertia in a cup. Players in Dice Stack can stack dice up by hand and even learn a little arithmetic while doing it. Sounds easy enough, right? Well…there’s a twist. Each of the dice is not the standard cubic shape. Wacky would be a good descriptor for their shape, and with that detail alone, the concept of the game is shaping up to be something different. Still, is it worth playing again and again?

Seeing that the entire game consists entirely of rolling dice and stacking, there is no objectionable content in the game. If anything is noteworthy, it’s that the game helps young children work on addition and multiplication by keeping up with points on their turn.

In Dice Stack, which is subtitled “Pile Up The Points”, it’s true: points are literally piled up…carefully. Each turn, a player rolls a set of oddly-shaped dice, and then stacks them in numerical order, from the lowest number to highest. As this is done, the sum is counted out, and at any point, the player can stop and collect those points. If he wants, he can roll the Golden Die, and if it is placed without the stack falling, double points are earned. If the stack falls, the turn ends, and no points are awarded. The game is won when a player collects one-hundred points.

Upon seeing the game’s packaging and recommended ages, I could quickly see that this is a game for kids, but it is still to be enjoyed by all ages. In preparing my review, I enlisted a couple of awesome kids, perfect for helping me out: my daughter, Lizzy, and my god-sister, Riley. The initial opening of the package and setup of the first game was about as easy as it can get for a game. The components aren’t very numerous here, and that works in this title’s favor. There was a collection of the multi-colored dice, a sheet of instructions, and a mesh dice bag to keep it all together. I don’t know how much mileage the bag will be able to last, especially with over-eager children opening the bag, but the simplicity of the overall package is nice.

When the game gets rolling (pun most definitely intended), it all clips along nicely. None of us playing had any trouble following the rules; mind you, paying attention is the name of the game—that’s where the learning comes in. If you don’t pay attention to the dots when counting them up, you risk losing points. That means that kids will be learning basic addition and they need to concentrate: not just in carefully stacking the dice, but also in adding up their points.

Seeing as how the title is incredibly mobile and inviting across age groups, I showed it to others outside the primary age range, and they quickly got the hang of it. So, if you think that this “education title” is only for kiddos, I can tell you that most anyone can enjoy this title. It’s not the deepest experience you’ll find, but if you looking for a game to carry with you and pull out on a whim, you could do a lot worse than Dice Stack!