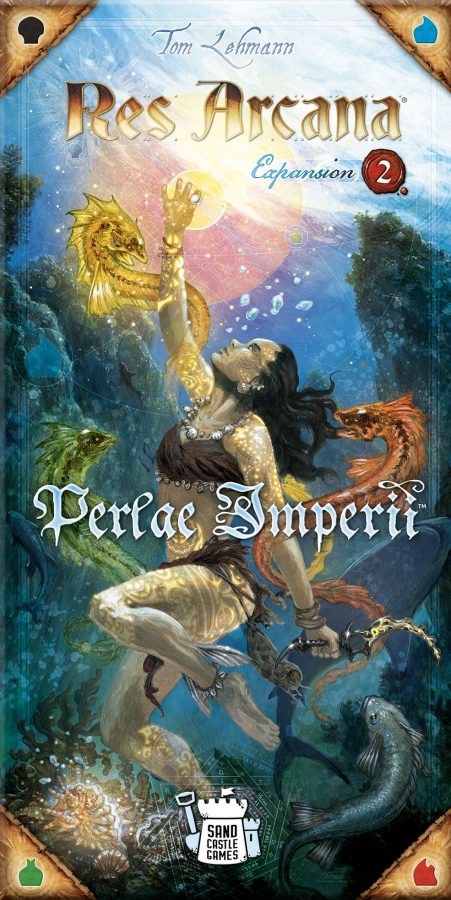 As reviewers, we have to be careful. We might change our minds on a game, but rarely do we go back and edit our reviews, which live forever on the internet as our original opinion. Hopefully I don’t make this mistake too often, but I definitely did with Res Arcana. This game is far better than I initially thought, and the more I play it, the more I love it. Part of that was the addition of the first expansion, Lux et Tenebrae. So I was quite eager to see a second expansion coming! Does Perlae Imperii also improve the game? Let’s take a look!

As unbelievable as it is, even after two expansions, everything still fits in Res Arcana’s beautiful base game box, with its removable resource tray. The new resource, pearls, go in the center – who knew? And the pearls are intentionally flat on one side so that they don’t roll are over the table – clever! Otherwise, players get more of the “same” – new Monuments, Artifacts, Mages, and Places of Power. I can’t see how this could be cheaper than $19.99 and still make a profit, so I appreciate the low price point.

A common complaint I’ve seen about Res Arcana is that ends too early, just as it is getting good. Typically a game between strong players will end on the fourth round, sometimes the fifth, very rarely the third. This has intentionally been changed with Perlae Imperii, as players now play to 13 points instead of 10. The reason for that is the addition of pearls. Each player starts with one, and pearls grant 1 VP, so players are already one point ahead compared to the usual. However, they can additionally exchange a pearl (losing the VP) for one gold or two resources, just like discarding a card. This has serious consequences!

Simply put, this means that more happens sooner. This change makes the expansion feel like Gambits for Star Realms or Prelude for Terraforming Mars, the formerly routine early game is now much more intricate, right from the first turn. Big moves can happen much earlier, and things accelerate a bit. And most importantly, this change is present even if you never actually see another component from Perlae Imperii in your game, which is entirely possible.

Of course, you would hope to actually see some new cards, and rightly so. Most of them interact with pearls in some way, but wisely interact with old concepts (dragons, creatures, other resource colors, etc.) very well. They all feel very powerful to me, which is certainly not a bad thing. In the original game it felt like there was a very wide gap between the power level of certain cards, while here everything feels strong, leading to tougher decisions about what to draft and what to play.

Thematically, I enjoy the maritime concepts in the expansion, althogh I’ve never used the theme as a reason to bring Res Arcana to the table. I’m just glad it’s there. Far more important than that, though, are the awesome new gameplay changes brought by Perlae Imperii. The decision space is simply bigger and tougher, and the game is slightly longer in a way that many felt it needed to be. If you’re not a Res Arcana fan, this won’t change your mind, but for the rest of us, this is a slam dunk.

Perlae Imperii is yet another great addition to the best game of 2019.