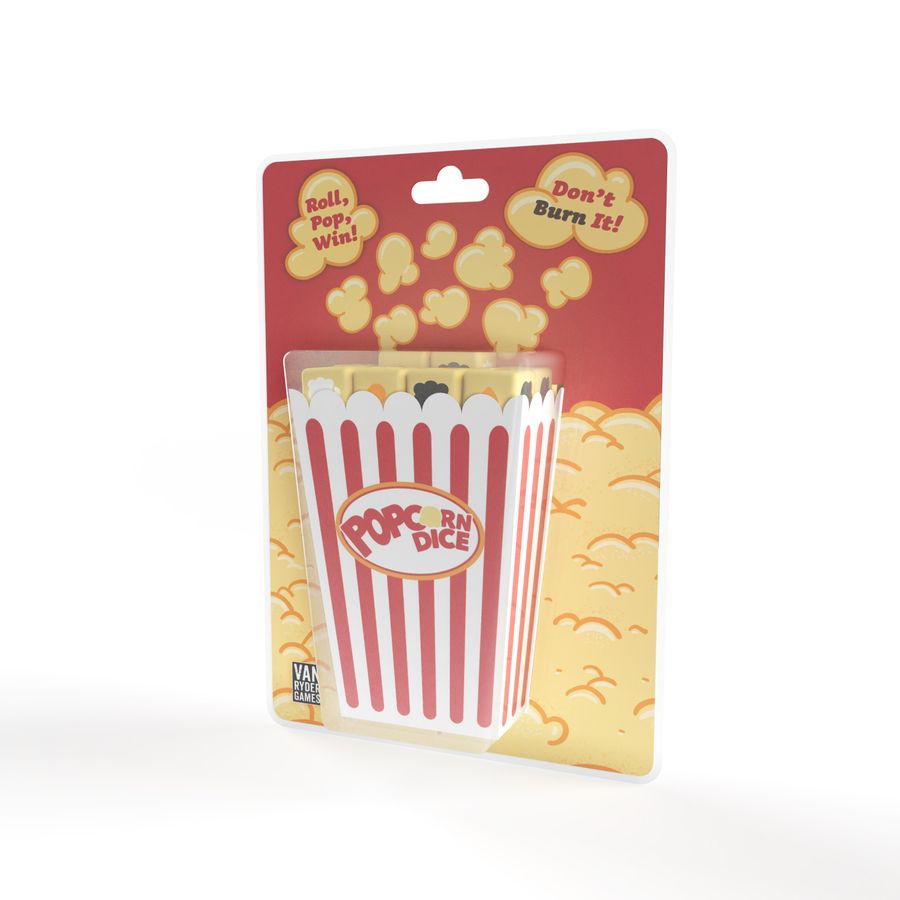 Popcorn Dice is a super-light push-your-luck game in which players take turns rolling dice and trying to pop as many corn kernels as they can without burning the batch! There are many push-your-luck games out there; is this one a crunchy treat or does its gameplay feel stale?

Popcorn Dice is an eye-catching product. It does not come in a traditional game box, but rather in a plastic popcorn bucket! Acting as both game storage and dice cup, the bucket contains a bunch of dice, each bearing faces for kernels, single pops, double pops, and burnt pops.

The goal of the game is to earn the most points, but players can also win if they roll a “Perfect Pop,” which occurs if all dice show single or double pop results (i.e. no kernels or burnt pops).

On a player’s turn, they begin by rolling all the dice. Each die is resolved based upon its result:

If the player rolled at least 1 pop and did not burn the batch, they may either roll again or stop and score. Alternatively, if they rolled only kernels and/or burnt pops, their turn ends immediately. Whichever way the player’s turn ends, as long as the batch is not burned, they earn 1 point per single pop and 2 points per double pop. All dice are then returned to the bucket and the next player takes their turn.

Normally, the game end is triggered when a player reaches 30 points. However, if a player ends their turn with all 14 dice showing pop results (a “Perfect Pop”), it also signals the end. In either case, the current round is completed so that all players have the same number of turns. If no one rolled a Perfect Pop, the player with the most points wins. However, a Perfect Pop supersedes a points-victory. In case of a tie, each tied player rolls 4 dice and the most points rolled wins!

Popcorn Dice is about as simple as games get, and for this reason, it works well for just about anyone. It’s the kind of game that can be played with kids, parents, grandparents, gamers, non-gamers… you name it.

Mechanically, this game feels similar to the push-your-luck classic Zombie Dice. However, there are some key differences that distinguish it from that game. For starters, Popcorn Dice gives players the ability to cancel a bad result, and it costs would-be points to do so. Additionally, the game offers a secondary, “shoot-the-moon” win condition; the prospect of a Perfect Pop incentivizes risk-taking, and it can lead to surprise underdog wins.

While I like both of these mechanisms, there is 1 aspect of Zombie Dice that I prefer over Popcorn Dice: the different die difficulties. Players only roll 3 dice at a time in Zombie Dice, so the likelihood of success varies from roll to roll depending upon whether the dice are easy, medium, or hard. In Popcorn Dice, all dice have the same probability, so the variable comes from the number of dice rolled rather than their difficulty. (Admittedly, this is not a problem with the Popcorn Dice, but simply a matter of personal taste.)

The production of Popcorn Dice is pretty minimal—just some dice in a bucket—but the game looks nice nonetheless. The bucket is sturdy and the dice are nicely engraved and colored. My 2-year-old is particularly drawn to this game because it doesn’t look like any of the others on my shelf. (Or maybe it’s because she likes popcorn; I’m not entirely sure.) Shaking and rolling the bucket of dice is a joy for all ages.

Any good game collection needs some lightweight fare, and Popcorn Dice is a good choice for ultra-light gameplay. If you’re in the market for a 5- to 10-minute game that is accessible to all ages and experience levels, this is one to check out!

A review copy was provided by Van Ryder Games.

Popcorn Dice feels like a cousin of Zombie Dice. While it is far from a strategic experience, it is good for ultra-light, all-ages gameplay.