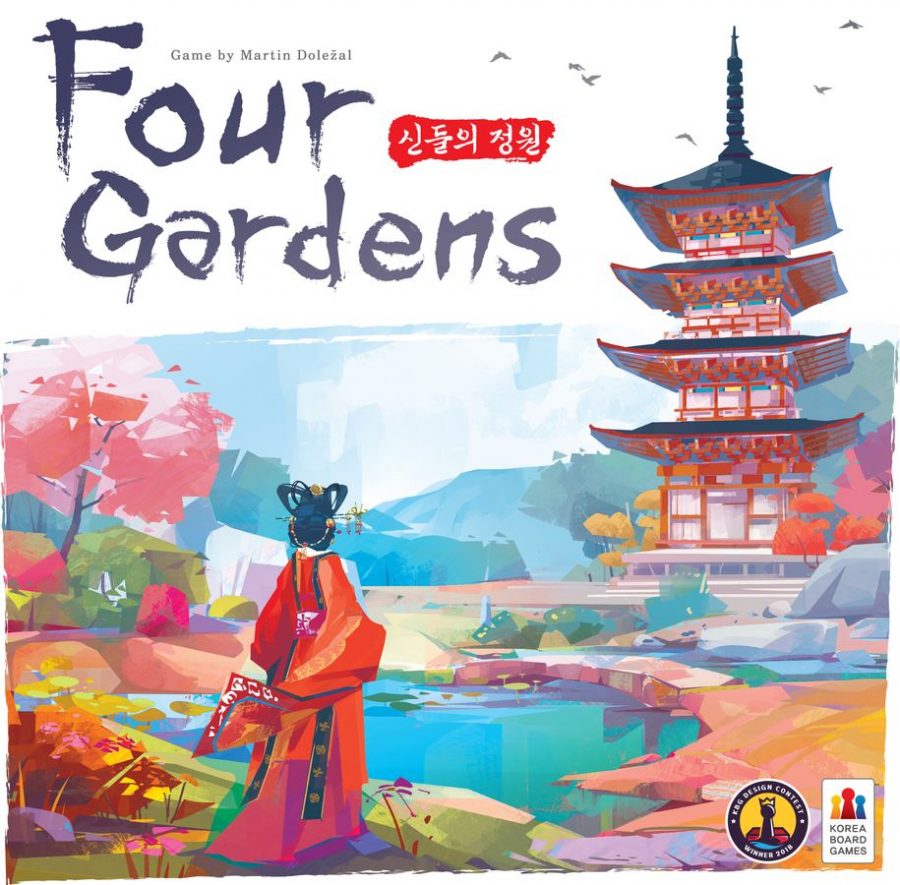 Four Gardens is a family-weight game of resource collection and card play. It has a stunning table presence, complete with panoramic images and a 4-tier rotating pagoda! It certainly looks great; how well does it play?

From the moment I first saw it, Four Gardens had me interested. Light on rules, visually beautiful, and featuring a super-cool 3D structure, I knew I had to check it out.

The goal of Four Gardens is to earn the most points, and this is done primarily by advancing on 4 tracks. Throughout the game, each player keeps a tableau of cards and resources.

Placed in the center are a small board showing the 4 point tracks, a few stacks of bonus tiles, and the rotating pagoda. The centerpiece of the game, each level of the pagoda shows a different resource type on its roof—0, 1, 2, or 3 of them, depending upon the side.

Four Gardens uses a Lanterns-style mechanism, in which each player faces a particular side of the pagoda, and the resources on that side are what they can collect.

The meat of the game comes from cardplay. Players play 3 cards per turn, and each card has an action side and a panorama side. The action side offers 3 of 4 possible actions. The different actions allow the player to:

The most interesting part of the game is how resource distribution works. To collect resources from the pagoda, a player must first rotate it 90 degrees. The card that was played shows which level of the pagoda is rotated; all levels above it turn as well. (For example, if level 3 was rotated, level 4 would rotate with it.) Then, players collect the resources shown on their side of the pagoda in the direction of the arrow, either top to bottom or bottom to top. The direction matters because normally, players can only hold 4 resources! As long as they have room in their reserve, players must take the resources shown on the pagoda—in order—whether they want to or not.

When a player takes the “Move Resources” action, they can redistribute their tokens as they please. This is also the only way players can discard unwanted resources! When a card is completed, meaning that it has all the necessary tokens on it, it is flipped over to its panorama side. When this happens, it advances the player on 1 of the point tracks, corresponding to the icon at the top of the card. Additionally, if the card continues a panorama that was started previously, the player scores points from the previous cards again!

As players advance up the tracks, they will likely max out their points in a color. If a player is at the end of a track and would receive another point in that color, they move all other players backward 1 space on the track! This can cause a player to “fall off” a point track, in which case they will score 0 points for that track.

Play continues in this manner until a certain number of panorama cards have been played. At the end of that round, the game ends and the player with the most points wins!

To me, Four Gardens feels like a mixed bag. On one hand, the game is tightly designed, beautiful to look at, and it offers a clever puzzle. On the other hand, the gameplay tends to feel repetitive and it is tactical enough that it’s difficult to plan one’s turn ahead of time.

Most of a player’s decision-making relies on the position of the pagoda at the beginning of their turn, so there is little room for forethought. This means that downtime can become an issue, particularly with more players. On top of this, 3 actions are usually enough to fulfill 1 card, and that’s it (Action 1: play the card; Action 2: take resources; Action 3: spend resources to complete the card). There may be 1 or 2 big plays throughout the game, usually involving bonus tiles, but more often than not, it comes down to “I fulfill a card on my turn, you fulfill a card on your turn,” and so on. It just starts to feel same-y.

This is unfortunate, because Four Gardens has a lot of characteristics that otherwise make it feel like Spiel des Jahres material. It’s as if the game is *almost* great, but not quite. I definitely think it’s worth a play—the puzzle it presents is indeed interesting—but it may not have long-term legs.

Four Gardens feels like it could be Spiel des Jahres material, but it is brought down by its emphasis on tactics and its repetitive gameplay.