When Flynn Carsen discovers that someone is killing potential Librarians, he must save them and stop the Serpent Brotherhood from releasing magic back into the world.

In 2004, TNT released The Librarian: Quest for the Spear as a stand-alone movie starring Noah Wylie and Bob Newhart. Its success eventually led to two sequels being made and released in 2006 and 2008. Now, 6 years later, TNT has heard our pleas and finally brought the franchise back, but this time as a series which was presented in a two-episode premiere.

Staying true to the feel of the movies, the series premiere was packed with the usual, quick delivery of intelligent dialog filled with facts and theories on everything from religious myth to Isaac Newton. The first episode, “The Crown of King Arthur,” acts as both an introduction for newcomers to the franchise and a kind of catch-up on what has happened over the past 6 years for those of us who are familiar with the movies.

Old characters are brought back: 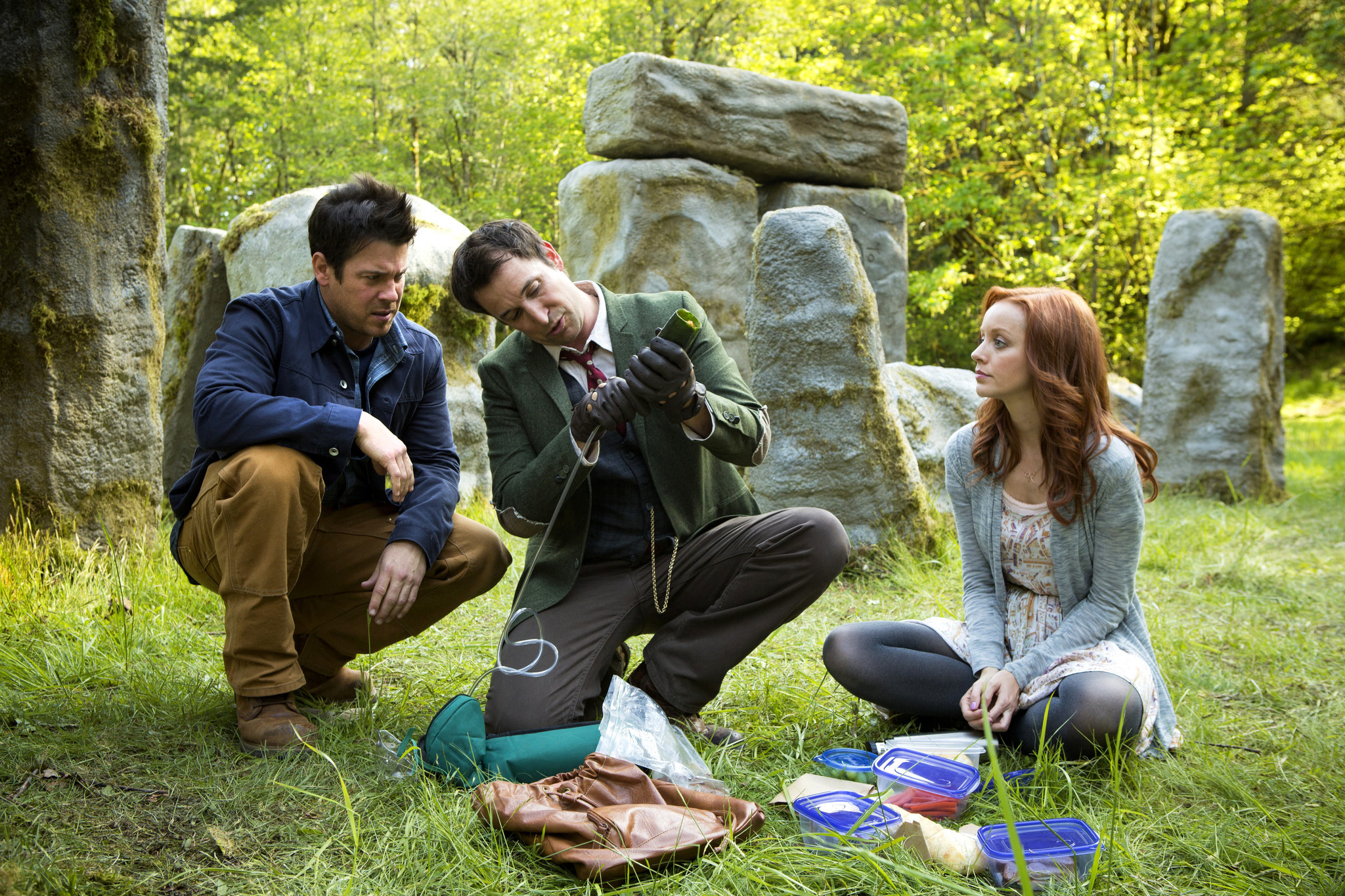 It wouldn’t be The Librarian if there weren’t puzzles to solve, and the series is sure to follow that layout with the newly assembled team. From beginning to end, clues are found, puzzles are solved, and treasure is unearthed, all while evading the Serpent Brotherhood’s henchmen. Of course, it’s a two-part premiere, so things can’t end there, and the team is betrayed by one of their own before the episode ends with at least one person in serious trouble.

Episode 2, “The Sword in the Stone,” picks up right where the previous one left off and shows us where the series will be heading with its first season. The library has been sealed off from the rest of the world and Flynn, Eve, and the others barely escape through a magical doorway to… Oregon? They are met by Jenkins (John Larroquette) who takes them to the library’s Oregon annex and explains what has happened. They now have to decide what needs to be done and rush to stop the Serpent Brotherhood from accomplishing their goal.

In the end, magic is released back into the world, even though Flynn and the Librarianettes manage to keep the Serpent Brotherhood from completing their task. The Library is sealed and cut off from the world, but many magical artifacts are stolen before that’s successfully accomplished. Now, it’s up to the new Librarians in training (L.I.T.s) to find the artifacts and keep the world safe.

Offering the job to the new Librarians, Flynn says, “I’m offering you a life of mystery… and misery, of loneliness… and adventure. More than that, I’m offering you an opportunity to make a difference and save the world every week.” This is exactly what the show is offering its viewers, as well as fun and humor, and I have to say that I am definitely signing on!

Violence – Martial arts style fighting and sword fighting. There is very little blood, and it only occurs once or twice in the two episodes.

Sexual Content  – There is no nudity or sexual content. There is one on-screen kiss towards the end of the second episode.

Occult References – Magic and magical artifacts play a large role in the entire series, but it’s fun and not dark. Flynn mentions demonologists in a derogatory way.

A two-episode premiere that's probably the most fun I’ve had with a show since I watched Chuck.

A life-long book addict, I spend most of my time trying to find a way to avoid reality through sci-fi and fantasy. I've been a Christian for quite some time (no numbers, please) and I'm always ready for a discussion about how fiction mirrors the Bible and its principles even when it's trying not to.
You might also like
DramasReviewsTV
9.5

by Noel Davila on January 4, 2020
Zach Snyder's 2009 film Watchmen proved a live-action Watchmen adaptation can be done, and Lindelof's 2019 Watchmen series proves it could be perfected.
8.2

by Tyler Hummel on January 1, 2020
The Mandalorian is easily some of the strongest Star Wars material we've gotten since the Original Trilogy.
9.0

by Noel Davila on October 10, 2019
In Undone, Alma wakes up with strange abilities after being involved in a horrific car accident.
Comments
Leave a reply