Review – Kipo and the Age of Wonderbeasts 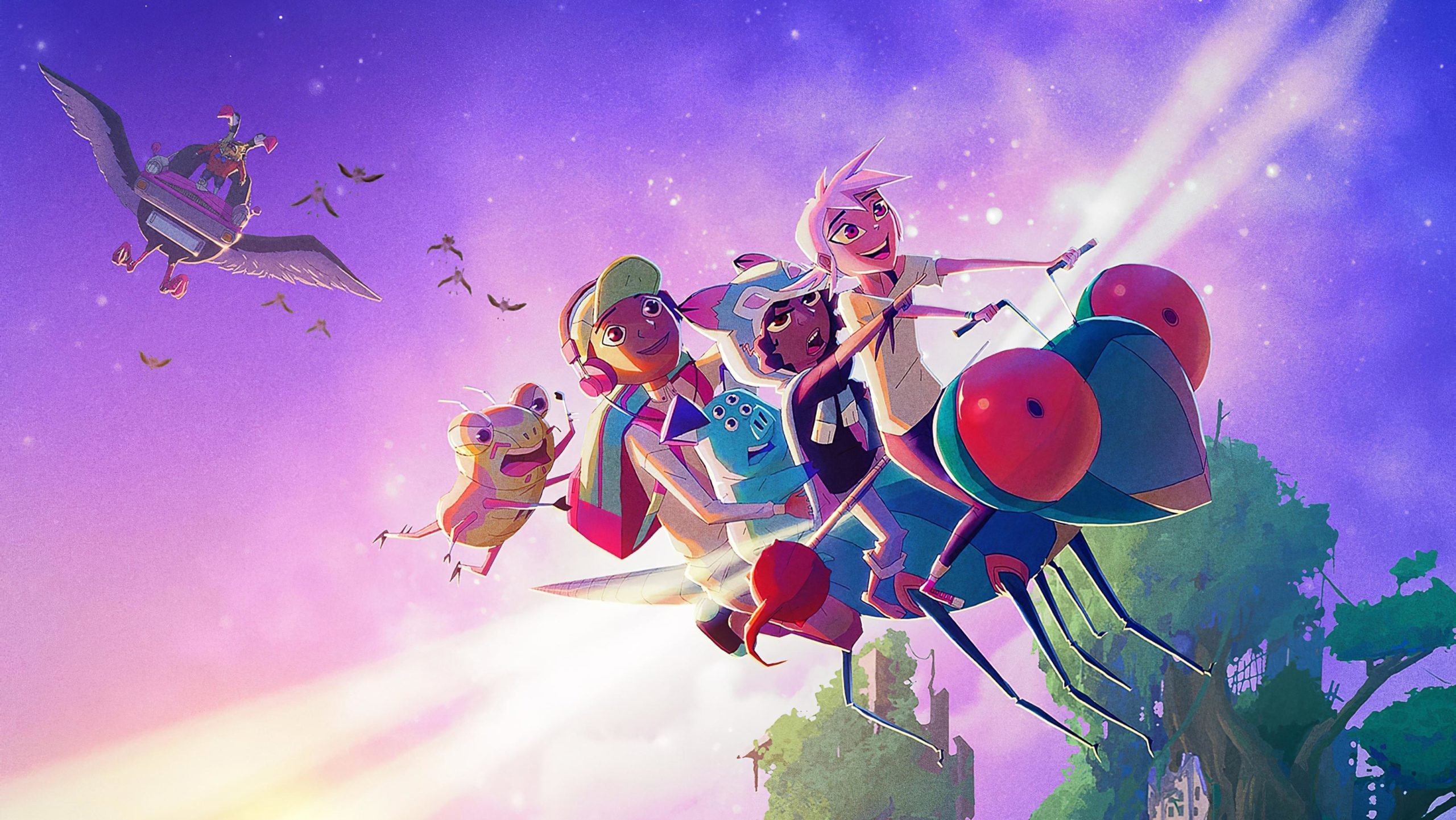 Violent/Scary Images: Use of weapons like a giant scorpion tail, spiked clubs, etc. Numerous chase scenes and fights. Battles between giant mutated animals. Giant flea fills with blood from a giant dog. Attempted mass murder by pouring molten gold over an occupied stadium. Use of blow dart guns injecting a vaccine which turns intelligent creatures into mere animals, as well as self-injection of a mutating serum. Near-drowning.

Other Negative Content: Boldly promotes LGBTQ normalization. View of humanity suggests naturalistic worldview where animals and humans are not so different.

Until now, every post-apocalyptic world imagined by storytellers has been a bleak horizon of dystopian, radioactive nightmares and dangers—but this kid’s show turns the genre on its head, and imagines the fallout world as one of bright possibility, wonder, and hope. Kipo and the Age of Wonderbeasts offers a dazzlingly beautiful glimpse of peace and harmony to a world filled with ugliness and chaos, and blares a message of reconciliation to a generation more divided than ever. Captivating the imagination with azure starry skyscapes and lush overgrowth covering once-populated city ruins, this mutant-inhabited world sports intelligent life with many new faces—animal faces.

These mutants, or “mutes,” take over the surface world while humans retreat to fallout shelters below, dubbed “burrows.” When Kipo’s burrow is suddenly attacked by a mega-monkey, her dad forces her into a waterway which leads her to the surface before her underground home collapses behind her. She must find her way back and survive the unknown dangers of what used to be the human world. Along the way, she meets both humans and mutes of all different backgrounds, many of which try to kill, kidnap, or eat her—but one by one, Kipo wins their respect and friendship, and ultimately brings peace to a world at war, finding and saving her parents in the process.

Kipo herself is a very likeable character. She is upbeat, optimistic, and sees the best in everyone…even the mutant mandrill overlord who plots to conquer the world and uses Kipo’s own father (under influence of mind-control) to capture her. By the end of the series, every major antagonist but one ends up slowly but surely influenced by Kipo and joins her side. How? She consistently offers them friendship in spite of themselves, yet without compromising her values. She respects them even when they don’t deserve respect. She stands up for her friends and protects them, but always has room for more…even if they were her enemies.

It is hard to say who undergoes the greatest transformation through Kipo’s influence and friendship. Wolf is a young girl, traumatized and hardened by her experiences in the surface world; she goes from a ruthless solo-survivor (who presumably killed her own adoptive mother in self-defense) to a friend and sister of Kipo who opens up to having a family once again. She even gives up her hatred for mutes and builds a relationship with the former-antagonist Scarlemagne, who himself experiences redemption. His story is perhaps the greatest, as he transforms from a megalomaniacal despot to a brother and ally of humanity, even sacrificing his life in the end to save his sister Kipo.

These stories are great examples of skilled writing, including poetic symmetry and parallelism. Scarlemagne begins life as a test subject, then becomes a son. He is then forsaken by his family, but ultimately reunites with them. Kipo risks her life for Scarlemagne, and then he gives up his life for hers. Emelia kills her natural brother, but Kipo is saved by her adopted one. The blanket Scarlemagne wore as a child is fashioned into a tie for his death. Wolf is betrayed by her family, and then forgives the former sister who betrayed her.

Wolf rejoins a family through Kipo, who becomes a sister to her. Kipo’s father rescues her as a baby, and again at age 13; she then saves her father in return. She loses her mother as a baby; in the end, she finds her and saves her. Kipo is both human and mute by birth; her mom becomes a mute, but ultimately regains her humanity. Emelia fights for dominance, but Kipo lays down her life for peace. Kipo is lost to the surface, yet there her life is found.

Much of the story of Kipo serves as a stinging yet inspiring social commentary, as the power of community and forgiveness transforms a dictator/attempted mass-murderer into a peaceful member of society. Rather than letting Scarlemagne rot in a cell, Kipo intentionally reintroduces him into public life, and the results are stunning. Slowly, painfully, he adapts to normal living and even publicly apologizes for his crimes.

By delving deep into his childhood and traumatic transition into adulthood, and by offering him a second chance, the show humanizes and redeems one who would otherwise end up behind bars when the credits roll—or worse. While blazingly optimistic, the show retains a sense of realism as the difficulties of forgiveness and reconciliation are explored.

If you can look past the flagrant LGBTQ propaganda, Kipo and the Age of the Wonderbeasts is a treasure. Few shows so beautifully capture the story of the gospel as Kipo does: a purple-skinned girl whose DNA is both human and mute. Her destiny is to unite and reconcile two great adversaries, human and mutes, through her unique identity. Similarly, Jesus the son of God was born to reconcile God and humanity.

Kipo accomplishes her purpose by continually seeking peace through nonviolence and forgiveness. She uses force when necessary, but always stops short and offers her enemies mercy. Still, some people refuse forgiveness and go on to their own demise. The show tidily deals with this by letting Kipo off the hook from delivering any sort of final blow to the main antagonist: she ends up slipping into a chasm where a mutant fungus named Fun Gus seizes her as his new toy and presumably torments her forever. “That’s as fair a punishment as any,” the protagonists shrug.

All in all, from death-defying dragonfly maneuvering to mid-war prom throwing, Kipo and the Age of Wonderbeasts is a uniquely thrilling ride. It even points to greater transcendent truths and the story of Jesus Christ. Kipo’s parents are also great role models and are a constant presence throughout the show—a rarity in children’s TV. Not to mention, the show features a killer hip hop soundtrack, including a rap about science from a pack of mutant, nerdy wolves. While not a perfect show, it is true to itself and makes no apologies. For older viewers who can use discernment concerning issues of worldview and sexuality, this show is an enjoyable and memorable one indeed.

For older viewers who can use discernment concerning issues of worldview and sexuality, this show will be an enjoyable and memorable one indeed.