Episode One Review – The Book of Boba Fett 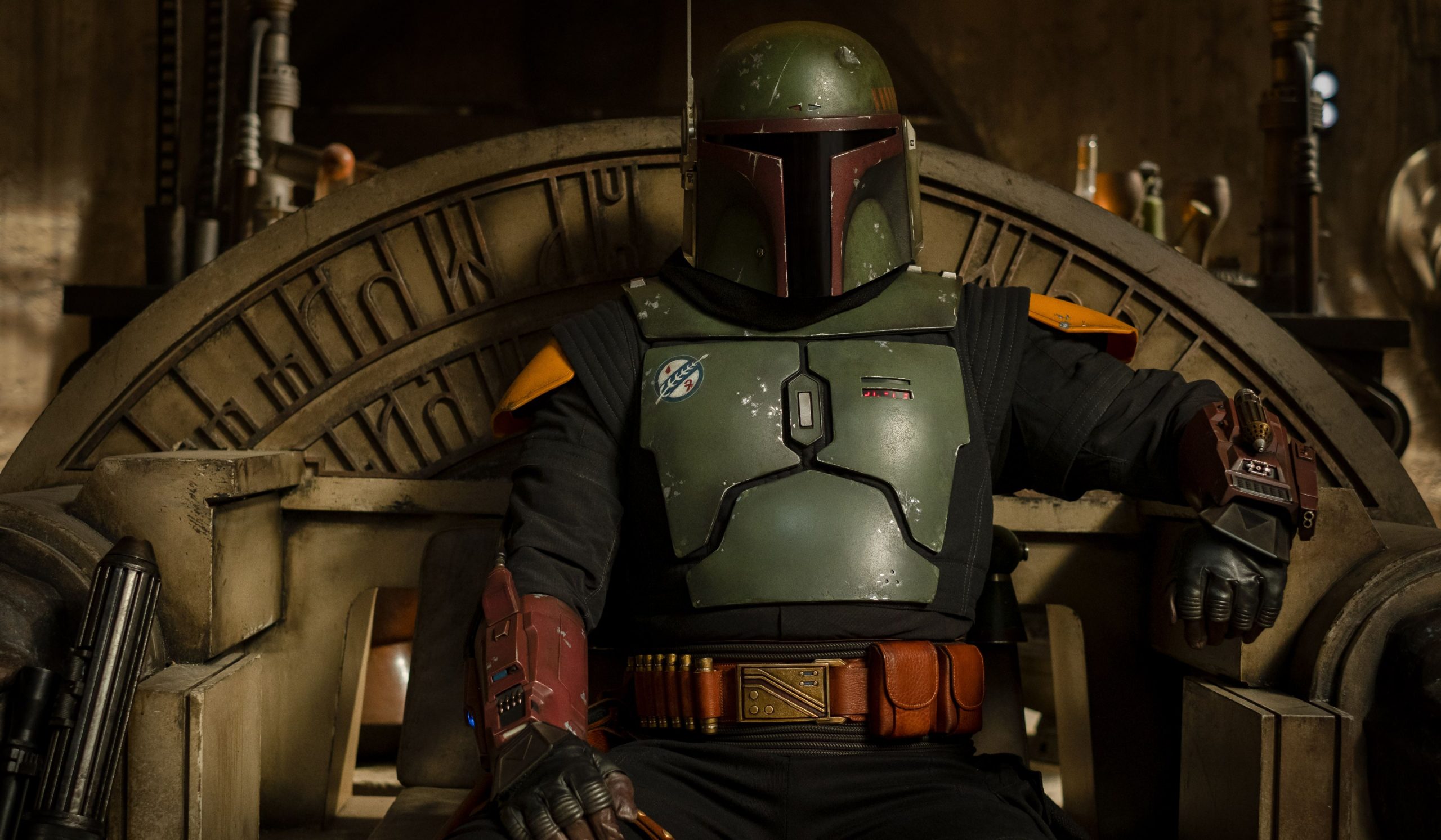 While the film side of Star Wars looks to be taking an even longer break now that Rogue Squadron and Taika Waititi’s stand-alone films seem to be on the rocks or are years out, Disney+ continues to plug away with its content. 2022 has promised to deliver the Obi-Wan series, Andor, season two of The Bad Batch, and The Mandalorian season three.

The Book of Boba Fett is the second live-action series to launch on the platform and is the first series to follow the success of The Mandalorian. It’s the first of three planned spin-offs to launch with Ahsoka and Rangers of the New Republic currently waiting in the wings.

Violence: PG-13 action violence with shooting and stabbing, no blood or gore

Drug/Alcohol Use: Scenes take place at a bar

Other Negative Themes: Themes of crime, power, and revenge

Our corporate overlords at Disney have decided to give us a year off from the adventures of Grogu and friends to shift gears into a new spin-off series built off of the story threads teased at the end of the season two finale of The Mandalorian.

As we saw, Boba Fett killed Bib Fortuna and declared himself the new leader of the former Hutt Clan, with Jabba having been dispatched in Return of the Jedi. With the rest of the Hutt clans having been destroyed offscreen in the comic book series War for the Bounty Hunters, a massive power vacuum remains in the criminal underworld of Tatooine. Boba Fett, now known as Lord Fett, must travel the cities of Tattooine dispatching assassins, demanding tribute, and strong-arming local politicians who want to take some of his power for themselves.

The Book of Boba Fett is off to a slow but not insubstantial start. The first episode is dedicated to establishing the status quo of the new series while the subsequent six episodes will hopefully expand the story. That mostly means episode one doesn’t answer a lot of questions or get the story rolling.

The Book of Boba Fett thankfully does not hold back on answering the most immediate two questions about Boba Fett post-RotJ: How did he survive the Sarlac Pitt and why did he lose his armor to the Jawas?

The structure of episode one is split between flashbacks and the contemporary story of Lord Fett’s rise to power. At the outset of the episode, we start with the hostile takeover from the post-credits scene of The Mandalorian having already happened. Fett is first seen in a healing tank that’s slowly repairing all of the scar tissue he developed in the stomach of the Sarlac Pitt and finds himself reliving the traumatic moments that led him to re-establish himself as a crime lord five years later.

After burning and cutting his way out of the Sarlac Pitt, a heavily damaged and wounded Fett collapses on the ground, loses his armor to the Jawas, and is captured alive by Raiders who want to put him to work digging up desert plants full of water.

The episode doesn’t fill in the timeline of the full five years, but it does seem to set up the status quo for why Fett wandered the sands of Tattooine for years quite well. We start to see how he ingratiated himself to the locals, found her new weapon and robes, and learned to survive in harsh conditions. Considering that the dreams were firmly established as a plot point, it’s likely we’ll continue to see more flashbacks over the entire season.

There’s still a lot of character work and story development that needs to happen for me to call The Book of Boba Fett any sort of success, but the first episode does at least establish the core idea the series is going to play with.

Lord Fett wants to rule, but he doesn’t want to be an oppressive tyrant. He wants to establish himself as a power player and rule with respect. Initially, he’s greeted at Jabba’s Palace by a procession of locals who offer him tribute or paradoxically demand tribute from him. His assassin Fennec Shand offers to kill prisoners or challengers as an example to the harsh society of Tattooine that only honors power, but Lord Fett chooses not to.

This is implicitly starting to become a problem later as he refuses to allow himself to be paraded through the towns he visits, preferring to walk on his own two feet. Instead of making himself intimidating, he seems to be making himself appear weaker to the people he wants to rule. He is at least capable of earning the tribute he demands just by the right of establishing who he is and who he’s replacing.

Predictions for Season One

The Book of Boba Fett has a lot of narrative ground to cover and it needs to start doing so quickly if it wants to build steam and keep the audience eagerly awaiting the next chapter of The Mandalorian entertained.

We don’t know a lot about the direction of the series, but certain leaks have suggested various ideas about what it could be about. It’s possible a deep fake Han Solo or Emilia Clarke’s character from Solo: A Star Wars Story could make an appearance. There are also rumors involving Captain Rex from The Clone Wars and Cid from The Bad Batch. Cad Bane seems like a likely character to appear, given we don’t know what he’s been up to since Clone Wars. It’s even possible Mando himself or Grogu could make some sort of cameo.

Cameos don’t make a show, though, and the series needs to root itself deeply as a story and dig into Boba Fett’s character. We need to understand who this man is and why this hard-bitten bounty hunter is suddenly so dedicated to honor and respect. Did living with the Sand People change him? Did he always have a Mandalorian honor code? What will having that code mean in the face of the power-obsessed criminal underworld? How is he going to change when the realities of power and honor clash with each other?

The Book of Boba Fett has a lot of potential given it’s the first solo project involving one of Star Wars’ most beloved side characters. It has a lot of ambition it needs to deliver upon. I’m hoping Jon Favreau, Dave Filoni, and Robert Rodrigeuz can do so.

The Book of Boba Fett is off to a modest start, but it has room to grow. If Favreau and Filoni's previous record shows anything, the series will likely pick up as it goes along.