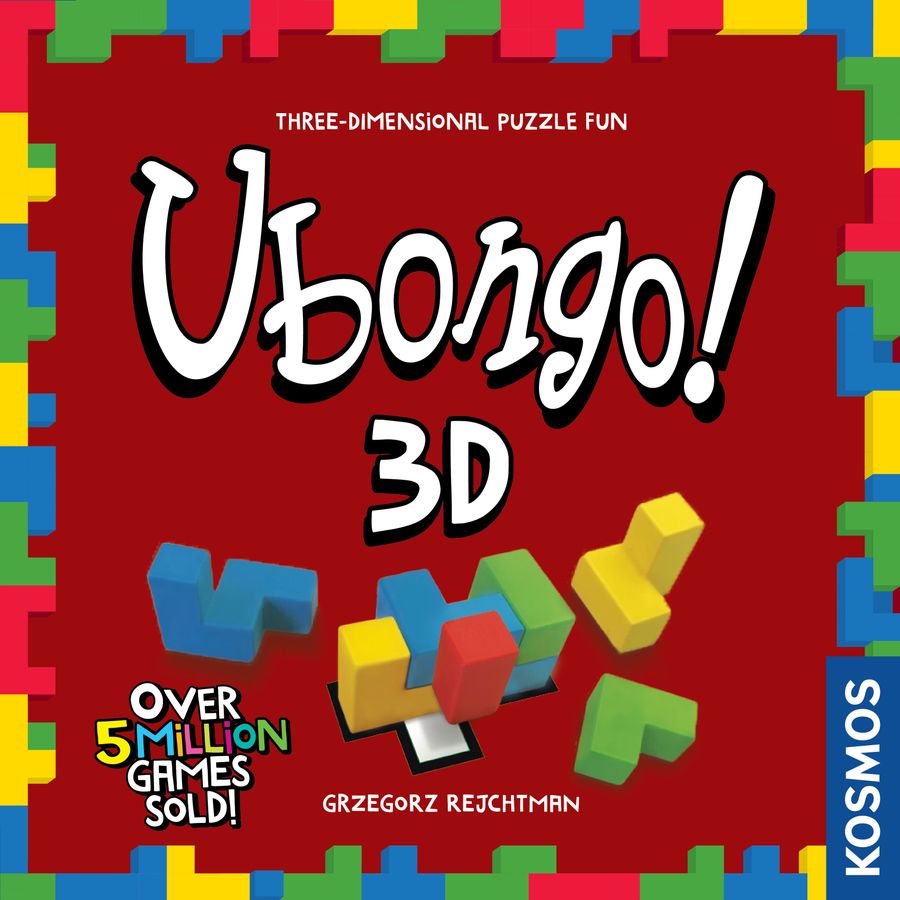 Ubongo 3D takes the formula from the classic puzzle game Ubongo and adds a new dimension to it. In this game, players race to complete spatial puzzles using colorful plastic blocks. Each round, any player who completes a puzzle is rewarded, but the first and second players to complete them receive an extra bonus. There are a lot of real-time puzzle games out there… how does this one “stack up” to the competition?

The Ubongo series is extraordinarily popular and has been for years. It has seen numerous versions, ranging from squares to hexes to Star Wars (!), but the 3D version seems to be the highest-regarded of all.

This game is played using plastic blocks and cards. Each card bears 2 puzzles—1 on either side. The puzzles come in 4 colors/difficulty levels, and at the start of the game, each player receives 9 cards of their chosen level. Since the difficulty is variable, players of mixed ages and abilities can easily play together (e.g. young kids might play on the beginner level while their parents play on medium or hard). This ensures that everyone’s challenge is suited to their skill level.

To prepare the game, players place 2 rows of 9 gemstones—1 row of blue and 1 of brown—in the middle. The other 40 gemstones are then placed into a draw bag, and each player receives a set of 8 blocks.

A game of Ubongo 3D lasts 9 rounds. Each round, all players draw the top card from their deck, and someone rolls the die. The die result tells players which blocks they must use this round, as shown on their card.

Then, a sand timer is flipped and everyone simultaneously races to fit all the required pieces on their card. The following rules apply:

Play continues in this manner for 9 rounds. At the end of the final round, the player with the most points wins!

Most people can probably tell if they’ll like the Ubongo series before ever playing it. I love puzzle games, so it was a foregone conclusion that I would enjoy it, but it’s certainly not for everyone. If you enjoy games like Dimension, Tuki,or Uluru (AKA Pelican Cove), you will almost certainly love Ubongo 3D. It tickles the brain in the same way as those games. On the contrary, if you do not care for spatial reasoning games, Ubongo is likely not for you.

The puzzle aspect of this game is rich and thinky, and the difficulty scales quite well—the “hard” puzzles are indeed hard, especially under a ticking timer. The real-time nature of this game gives it a frenetic pace and makes the experience stressful, but in a fun way (again, like Dimension et. al.).

One thing I did not care for in Ubongo 3D is the scoring system. Drawing gems blindly from a bag to determine points seems unnecessarily random. It is nice that the first and second players to finish each round earn a bonus, but even so, the luck of the draw means that the last player to finish can earn more points than someone who finished earlier! Consider that if the second-place player draws a 1-point gem from the bag (roughly a ¼ chance), they will come away with 2 points total: 1 point from the bag + 1 bonus point. If the last-place player then draws a 3- or 4-point gem from the bag (roughly a ½ chance), they will have earned more points, even though they did “worse” in the round.

Now, obviously the law of averages says that things will even out over time, but with only 9 rounds in the game, it is easy for a player to have several lucky draws in a row and win the game because of it. I would have much preferred if the scoring system was simply “the first player to finish earns 4 points, second earns 3, third earns 2, fourth earns 1,” or something like that.

The good news, however, is that the scoring is secondary to the fun of the puzzles. In the end, it doesn’t even feel important who wins the game, because the whole point of playing is have fun and do some brain-aerobics. Ubongo 3D is all about the spatial challenges, and they are indeed clever and engaging. If that sounds like your cup of tea, check this one out.

Despite a scoring system that feels unnecessarily random, Ubongo 3D is a lot of fun to play. Highly recommended for fans of puzzle games like Dimension, Tuki, and Uluru.