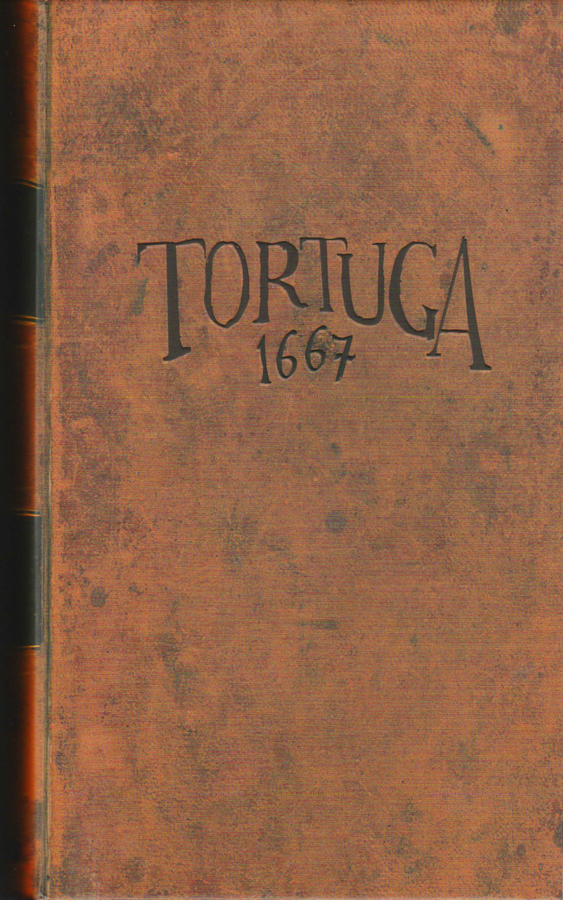 Tortuga 1667 is part of Facade Games’ “Dark Cities” series, a line of historically-themed games with a dark twist. This social deduction game puts players in the roles of ruthless pirates – looting and shooting, pillaging and plundering to their black hearts’ content. The game is team based, but players each have secret loyalties, so they need to be careful about whom they trust…

Yo ho ho, am I right? Tortuga 1667 combines two things I love: pirate themes and social deduction. In this game, players form teams of salty scalawags attempting to steal the most loot by attacking the treasure-laden Spanish Galleon… and possibly each other.

At the start of the game, each player is dealt a secret loyalty card, which determines their team affiliation: French or British. In games with an odd number of players, one person plays as their own team, the Dutch.

The game is played on a lovely neoprene mat showing several areas, including:

During setup, player pawns are drawn randomly from a bag and placed on the pirate ships, alternating between the two of them. On each ship, the player in the topmost spot is the Captain, the next player is the First Mate, and the player in the lowermost space is the Cabin Boy. Throughout the game, these roles will change hands, and it is possible for a single to player to have multiple roles at once.

A deck of event cards is shuffled, and five are splayed out in a row, face-down. The final card in this deck is always the Spanish Armada, which triggers the end of the game. Each player also receives three vote cards, which are used for a few different types of actions, as I’ll discuss below.

On a player’s turn, she takes one action. The actions that anyone can take are:

As one would expect, the deck contains good events and bad events. Players can try to locate helpful cards to use for themselves, or if someone thinks they know another player’s team affiliation, they can try to help or hinder them by forcing them to use a card. The rowboats act as connections between the pirate ships and Tortuga – players can use them to move from one to the other.

In addition to these regular actions, the Captains, First Mates, and Cabin Boys have unique actions that only they can perform. A Cabin Boy, for instance, can move treasure between the holds of his ship, changing which team owns it. A Captain can maroon another pawn to Tortuga; the first player to enter the island earns the title “Governor of Tortuga.”  The other special actions use vote cards.

These tripartite cards have sections for the Captains’ attack action, the First Mates’ mutiny action, and the Governor of Tortuga’s brawl action. In each case, all players involved submit vote cards face-down to a central pile, and one is added at random from the deck. (If you’ve played Battlestar Galactica, this is similar to the Destiny Deck in that game.) Then, the cards are revealed and the appropriate section is used to determine the outcome (e.g. in a mutiny action, only the “Mutiny” section of the cards is considered).

For the sake of brevity, I won’t go into too much detail about how each of these work, but you can probably guess the gist of them: mutinies maroon the captain, attacks steal treasure, and brawls move treasure around on Tortuga. In each case, the action is usually accompanied by a loud, piratey “ARRRRRR” from at least one person at the table.

When the event deck is depleted, the five remaining cards in the row are shuffled and splayed out again, so no one knows where the Spanish Armada card is. The game continues until someone reveals it, at which time it immediately ends. If one team has more treasure than the other, that team wins. Otherwise, if the French and British teams are tied, the Dutch player wins. If there is no Dutch player, the game continues, and the first team to take the lead wins.

Man, Tortuga 1667 is a GORGEOUS game. Everything about it looks and feels well-crafted, from the neoprene map board to the brightly-colored components to the attractive box, made to look like an old book. Facade Games really knocked it out of the park with their production quality.

Gameplay-wise, Tortuga 1667 provides a more strategic experience than many other social deduction games, but it still involves the bluffing and deception that make the genre fun. The multi-use voting cards add an interesting wrinkle that forces players to think carefully about how and when to use them. Subtle strategies like camping out in a rowboat to block players from moving add an additional dose of humor, too. The pirate theme is presented well, making it easy for players to get into the swashbuckling mindset.

The box says this game is for two to nine players, but it is absolutely better at the higher end of that range. Most likely, I would not want to play with less than five. Like most social deduction games, the more players there are at the table, the greater potential there is for bluffing, backstabbing, and table-flipping (all the things that make the genre hilarious). Moreover, odd-numbered groups work particularly well, because the presence of a Dutch player throws a wrench in the psychological metagame.

For fans of social deduction or pirate-themed games, this one is a no-brainer. However, I would also suggest it to players who have grown tired of stuff like The Resistance or Secret Hitler, or simply find them unsatisfying to play. Tortuga 1667 feels a bit more like a “gamer’s game,” but it’s not terribly difficult to understand. If this sounds like your jam, check it out!

A review copy was provided by Facade Games.