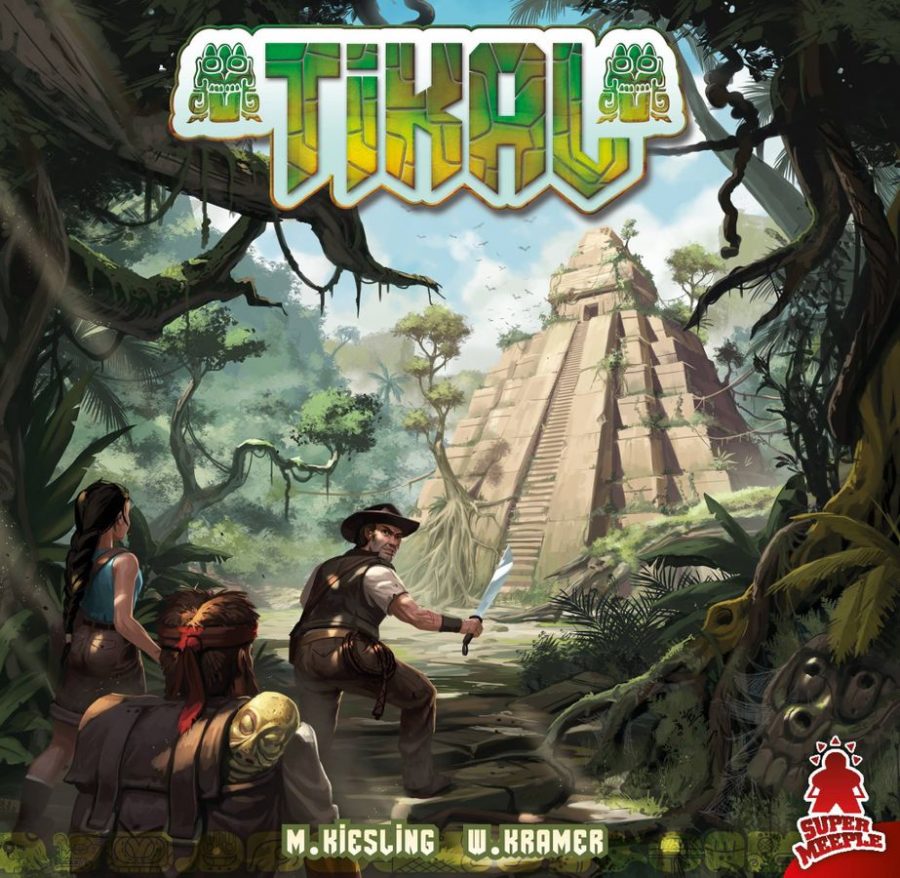 Tikal is a classic euro game of exploring a dense jungle. It is among the first games (if not the very first) to use an action point selection system, and it won the Spiel des Jahres in 1999. How does it hold up today?

In Tikal, 2-4 players hack their way through the Central American wilderness in search of ruins and treasure. Each player begins at a humble campsite and slowly expands their reach as they explore the board. The goal of the game is to earn the most points; points come from collecting sets of treasures and controlling temples.

The game is played on a large board full of hex spaces. Each turn, the active player begins by revealing and placing a new tile. Tile edges often have 1 or more “stones” on them, which indicate how player meeples can move about the board. In order for a meeple to move to an adjacent tile, it must pass over at least 1 stone. Each stone it passes costs an action point, meaning that if a player wanted to move to a neighboring tile across 4 stone icons, they would have to spend 4 action points to do so. (Players always have 10 action points available on their turn.)

Certain tiles bear temple or treasure icons. In addition to moving, players can spend their action points to:

Temples and treasures are at the core of this game. As temple tiles are discovered, players can build up the 3D structures, adding to their value. Treasures are a set collection mechanism; there are many types of treasure, and players earn points for having multiples of the same type (hence why they might want to switch tokens with an opponent).

There are 4 scoring rounds throughout the game, and they occur at semi-predictable intervals. When a scoring round is triggered, each player immediately, in turn order, takes 10 actions and then scores based on their current situation.

Points come from treasures and temple majorities. For each temple, if the current player has the most meeples on the tile, they score points equal to the temple’s height (up to 10). The exception is if a player has already claimed the temple. This can only be done by a player who has the most meeples in the space, and when they do it, they lose all but 1 meeple. This is a stiff penalty, but it can be worth it to secure permanent ownership of a valuable temple. Treasure tokens award 1, 3 or 6 points for having 1, 2, or 3 of a kind. Since scoring happens 4 times, getting treasures early can be huge because they can score again and again.

The game continues until all tiles have been explored. At that time, the 4th and final scoring round takes place, and the player with the most points wins!

23 years later, Tikal still stands as a solid euro game. Like many Kramer/Kiesling titles, it is tightly designed and provides a good deal of strategy with a little bit of luck thrown in. As an aside, there is a gameplay variant that eliminates the luck of the tiles, but I (and many others) prefer the base ruleset—luck and all—since it plays quicker.

Like many area majority games, Tikal has the potential to be cutthroat. While there is no direct interaction, the strategy of this game involves one-upping the other players to maintain majorities and crafting paths to be as difficult as possible for others to tread. It’s not a mean game, but it is a game that rewards craftiness.

The only issue I have with Tikal is that it has a potential “rich get richer” problem. Often, the first scoring round foreshadows the ultimate result. Since treasure and temple points compound again and again each scoring round, the person who takes the lead early on will often win. (Anecdotally, in many of my plays of Tikal, I have seen the relative positions of the players after the first scoring round remain the same the entire game.) This is fairly common of 90s/00s euro game design; at that time, games didn’t typically have catch-up mechanisms.

The production of the Super Meeple version is lightyears better than the old Rio Grande version. The temple pieces are amazingly well produced and they help to bring out the exploration theme. Likewise, the box is a standard square, rather than a long, awkward rectangle. This is an instance where, if you love this game, I would recommend upgrading to the newest version. It is that much better.

If you haven’t played Tikal, it’s worth checking out. This game still holds up against modern euros, which is a testament to its longevity.

23 years later, Tikal still holds up as a solid euro game. If you haven't tried it, it's worth checking out.