Review – The Siege of Runedar 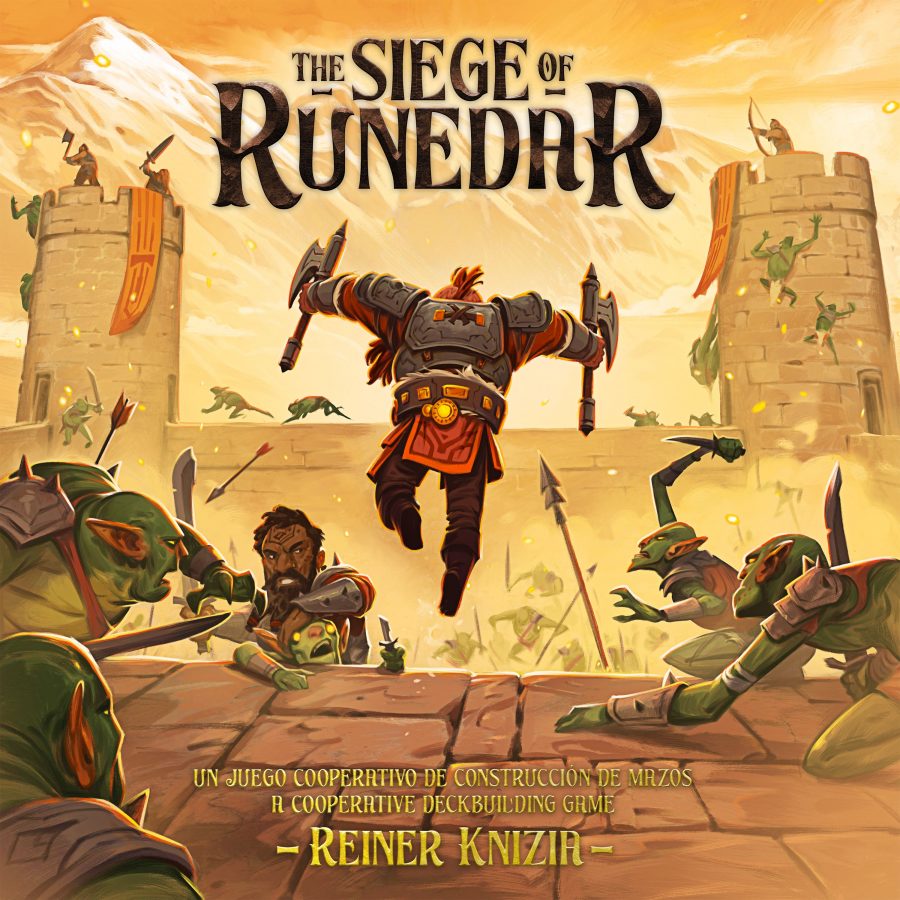 The Siege of Runedar is a cooperative tower-defense game from acclaimed designer Reiner Knizia. Unlike many of Knizia’s games which feel mathematical and mechanical, Runedar is strongly thematic and includes design choices not often found in his games. Let’s see how it plays!

In The Siege of Runedar, players wage a desperate battle to protect a fortress from outside invaders. As trolls, goblins, and orcs threaten to overrun the stronghold, players race to dig an escape tunnel.

The game is played not on a traditional board, but rather inside the game box. The plastic insert represents the fortress of Runedar, and before the first game, players will need to assemble the castle by adhering cardboard tiles to the insert using the included double-stick tape.

Deckbuilding is at the core of this game. Each player begins with a deck of 12 cards, from which 2 start in the discard pile. The general turn sequence involves players resolving any orc cards from their 5-card hand, followed by any dwarf cards. Orcs are the bad cards—they add and advance attackers and deploy weapons of war—and dwarves are the good cards—they allow players to move, gain resources, attack enemies, upgrade cards, and dig. The weapons of war are the catapult and siege tower, which provide additional headaches for players; if left unchecked, they will cause them to lose.

Without going into granular detail about each action, the overall idea is that players move about the castle, visiting the different locations (workshops, walls, towers, and the central chamber). Workshops produce resources, which are required to make new cards available. Once a card becomes available (i.e. once it has the requisite number of resources on it), a player can collect it from the market, but must discard a dwarf card from their hand to do so. In this way, players’ decks always remain at 12 cards: 10 good and 2 bad.

As enemies advance, players can spend cards to roll the attack dice indicated on them. Attacks can be close-range when in the same space or long-range if the player is on a tower space. Attacking is critical to hold off the invaders.

Lastly, players can dig the tunnel. If the tunnel entrance space contains no enemies, the player can play cards to remove rubble tokens. Once all rubble has been cleared, a section of the tunnel is completed and a couple of enemies appear. When these enemies are defeated, players refill the rubble tokens to begin the next section. If players finish digging the final section and defeat the added monsters, they win! (Like most co-op games, there are numerous loss conditions.)

The Siege of Runedar feels like a meatier alterative to Castle Panic. These games are very similar in flavor—defending a fortress against an endless onslaught of fantasy baddies—but Runedar has more going on in terms of complexity. To its credit, it provides a more strategic experience than Castle Panic, but it is not as accessible as that game is. (It also does not feel like a typical Reiner Knizia design at all.)

The production of Runedar is decent, the star of the show of course being the castle insert. Some prep work is necessary before the first game to adhere the tiles to it, but once the castle is assembled it shouldn’t require much upkeep. The player/enemy pieces and resource tokens are generic but functional. My biggest issue with this game’s production is its box size. The box is slightly larger than a standard Ticket to Ride­ square, just too big to fit on an IKEA Kallax (the gold standard of game shelves). Now obviously, if you don’t have a Kallax this won’t be an issue, but if you do, it will be a major annoyance.

The Siege of Runedar offers multiple difficulty levels, but the way that it scales is by making the game longer, not harder. Each successive level adds more rubble tokens, meaning players have to dig farther down and therefore survive longer. Personally, I don’t care for this design choice and would have preferred if the game length remained consistent and the enemies’ toughness changed.

All told, Runedar feels like a solid design (a given, coming from Knizia), but it wasn’t for me. It’s definitely an interesting departure from Knizia’s usual fare, but personally, I prefer Castle Panic for a tower defense game. The simplicity of that game is a major draw for me. Still, I would recommend Runedar to folks who want a deeper tower defense experience, one with more “gamer” sensibilities.

The Siege of Runedar is a noticeable departure from Knizia's usual style. Though the design is strong, the gameplay did not grab me. For a co-op tower defense game, I'll stick to Castle Panic.