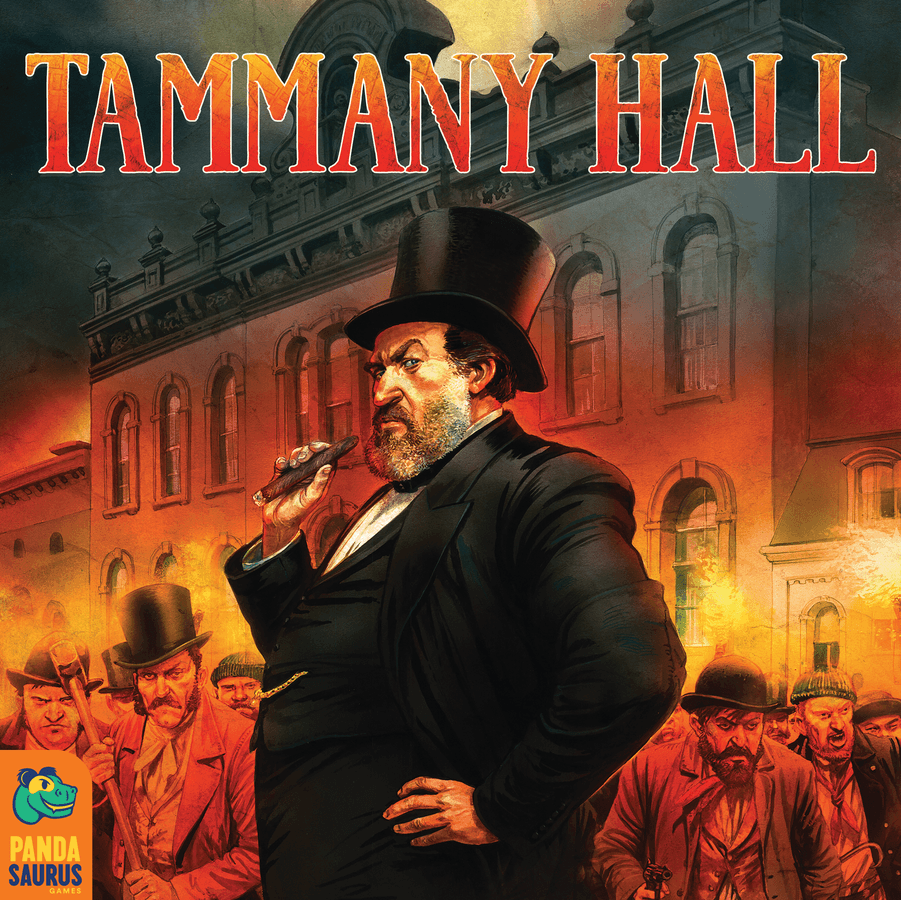 Tammany Hall is a board game of negotiation, treachery, and backstabbing. Originally released in 2007, the game is now on its 5th edition (no small feat). Tammany Hall was the first release from Pandasaurus Games, who has since become a major force in the tabletop industry. Now, in 2020, Pandasaurus is re-releasing the game in the most deluxified version yet. How does this game hold up? Read on!

I so love negotiation games. There is something about their emotionally-charged play style that brings out people’s true colors. I also love area control games because they are inherently cutthroat and they naturally encourage one-upsmanship.

Enter Tammany Hall, a game that combines these two mechanisms and is widely considered one of the meanest games ever made. (*rubs hands together*)

Tammany Hall is set in mid-19th century Manhattan, the era of the infamous Boss Tweed. In this game, players take turns deploying ward bosses (meeples) and immigrants (cubes) onto the board in hopes of earning political favors, seizing power, and ultimately scoring the most points. The game takes place over 16 years/rounds, and at the end of every 4th year, an election is held to determine which player will become the new mayor.

The game board is divided into 3 zones, each subdivided into different wards. At the start of the game, a number of immigrant cubes are placed onto the board, depending upon the number of players. Several more are added to the lower-left section of the board, “Castle Garden,” essentially the waiting area for immigrants.

In each year/round of the game, all players take 1 turn. On a player’s turn, they either place 2 ward bosses onto the board, or 1 ward boss and 1 immigrant from Castle Garden. Regardless of which action the player chooses, the 2 pieces can be placed onto any active spaces, regardless of what pieces are already there.

Here, the purple player’s first action was to place a ward boss in Zone 1 and move a blue immigrant cube there as well. The pieces could have been placed in 2 separate spaces, if the player had desired.

Whenever a player moves an immigrant onto the board, they earn a matching political favor token. In the example above, since the player moved an Italian immigrant (blue cube), they earned a blue favor token (the blue disc with the old Italian flag on it).

Starting after the first election (that is, after the 4th turn of the game), players can take extra actions in addition to their normal ones. After a mayor has been elected – more on that momentarily – each player is appointed to a city office, which gives them a unique, once-per-turn ability.

Additionally, once per 4-year term, each player can slander an opposing ward boss. To do this, the active player and an opponent must both have a ward boss in the same space, and the active player must have a political favor token matching a cube in the ward. As as example:

Here, purple and brown both have ward bosses in the same space. On purple’s turn, he decides to slander brown to kick her ward boss out. To do this, purple spends a favor token matching the color of an immigrant in the space – blue, in this case. (Since all immigrant colors are present in the space, any favor token would have sufficed.) Brown’s ward boss is then removed and returned to her supply.

There is also a way to expand the slanderous attack into an adjacent region, possibly removing another boss as well.

However, the heart of the game lies in the elections; they are where things get intense. Every 4 turns, an election is held which decides who controls each ward and who claims the mayor’s office.

One by one, players consider each ward individually. Every player with a ward boss present in the space participates in the election, and each ward boss is worth 1 vote. Every participating player secretly selects a number of favor tokens and simultaneously reveals them, adding the total to their vote count. The player with the most votes takes control of the ward, and all other bosses are returned to their owners. In case of a tie, all bosses are removed and no one takes control of the space.

Red, black, and brown are participating in a ward election. Since they each have 1 ward boss present, they each begin with 1 vote. They can play blue, white, or green favor tokens to earn additional votes.

Then, after all elections have taken place, players determine who controls the most of each immigrant population. For each color, the person with the most cubes in their wards earns extra favor tokens.

Next, players score 1 point for each ward they control (exception: the ward containing Tammany Hall scores 2 points). The player who controls the most wards is then named mayor of the city (there are multiple levels of tiebreakers, if necessary). The mayor earns 3 points and immediately appoints all other players to city offices.

Players continue in this manner until the end of the 16th turn. At that time, a final election is held, and the player with the most points wins!

Tammany Hall is like a back-alley knife fight. This game is up there with the meanest of mean games like I’m the Boss and Diplomacy. To play this game is to shed any semblance of decency and go right for the jugular.

Personally, I really enjoy games like this, but I know not everyone does. Tammany Hall is fantastic for groups who, like mine, aren’t afraid to get extremely competitive and confrontational – the game basically forces it. With that in mind, players who prefer games with little to no interaction should look elsewhere.

It’s easy for historical themes in games to feel pasted-on, but the theme of Tammany Hall shines through beautifully. How better to represent a period of dirty political trickery than to allow players to make deals, break deals, and step on each other in pursuit of their own corrupt ends? This game takes a real, historical power struggle and distills it into a single evening.

Tammany Hall‘s production quality is fantastic. There are a ton of wooden bits in the box, including some which feature lovely heat-transferred details. The graphic design is clean and intuitive, and the on-board turn summary is helpful for quick reference. Additionally, the rulebook is clear and concise; players should be ready to dive right in after a single read-through. As usual, Pandasaurus Games has made a very high-quality product.

I think Tammany Hall is excellent. It takes the most in-your-face game mechanisms and combines them into a vicious and unforgettable experience. I highly recommend this game, so long as players understand that they are in for an all-out brawl. (Just don’t be surprised if the game ends with a table getting flipped!)

13 years after its original release, Tammany Hall still holds up as an excellent (and vicious) game.