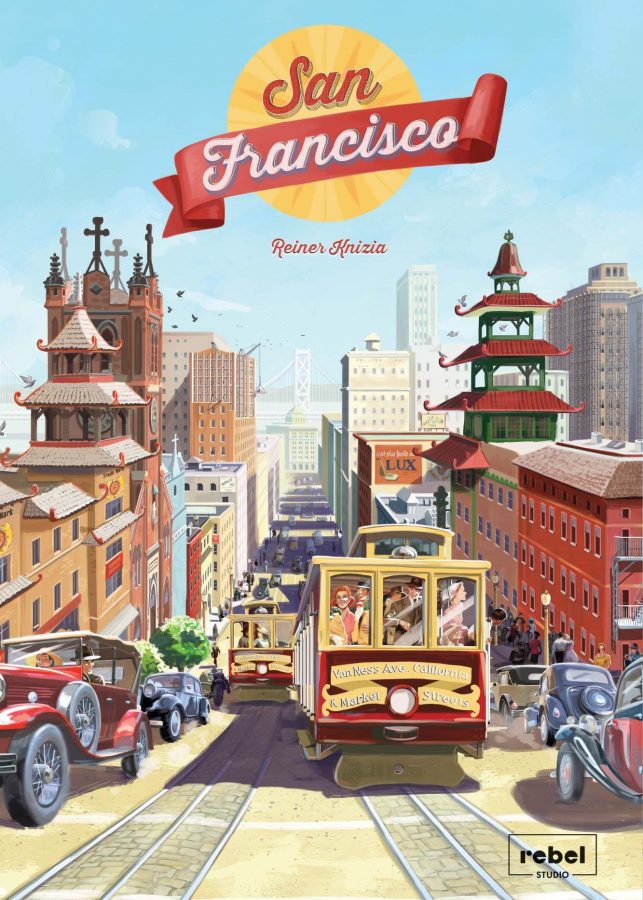 The latest release from prolific designer Reiner Knizia, San Francisco is a game of city districts, skyscrapers, and cable cars. Ready to try your hand as an urban planner?

San Francisco is a game about building the titular Bay Area city. In it, two to four players construct tableaus representing the cityscape with the goal of earning the most points.

Every player begins with a personal board. In the central play area is a market display where project cards will be placed throughout the game. Each turn, the active player must either place a project or finalize a project.

To place a project, the player simply flips the top card of the project deck and adds it to one of the three columns of cards in the market. To finalize a project, the player takes all the cards from a column, along with a contract token. In a very Knizian twist, a player can only choose a column in which the number of cards is greater than the number of contracts they currently have. This means that the more times a player takes cards, the more limited their options become as they can only take larger groups. However, players periodically get to discard contracts; at all times, there must be at least one player with zero contracts, so if it happens that all players are holding one, they all discard contracts until someone once again has zero.

Cards come in the colors of the five city districts, as well as black, which acts as a wild color. Some cards feature cable car tracks—players use these to build a network on their tableaus. Whenever a card with tracks is placed such that the tracks can be traced back to a cable car depot, a cable car piece is placed on the card to note that it is part of the network.

Among the other cards in the deck are city squares, which earn points if they are adjacent to the cable car network, and foundations, upon which skyscrapers can be built. Anytime a foundation card is added to the market, a foundation token is placed on top of it. When added to a player’s tableau, the card remains just a foundation until it is surrounded by cards of at least seven value—at that time, a skyscraper can be added to it. (Skyscrapers are worth points at the end of the game.)

Throughout the game, players can earn bonuses by completing districts and controlling the most skyscrapers. The game ends when either the last foundation token is placed or when a player fills up their entire tableau. At that time, end-game scoring bonuses are awarded for districts and cable car networks, and the player with the most points wins.

In typical Knizia fashion, San Francisco does not try to hide its mechanical underpinnings. As with many games from this designer, the experience of San Francisco feels very “game-y,” with rules that aren’t there to support a theme as much as they are there to make the game mathematically sound. And while it is indeed sound in terms of design and strategy, it doesn’t grab me the way many Knizia games do.

San Francisco is not as bare-bones as games like Lost Cities or Through the Desert, nor is it as strategic as games like Amun-Re or Tigris & Euphrates. It’s somewhere near the middle of the Knizia spectrum, what I would call a “next step” game. The simple decision of “add a card or take a column” is compounded by the different scoring objectives and players’ desire not to get too many contracts. This core decision is interesting, but not to the degree of some other “Knizian twists” from his previous games.

The scores in this game tend to be pretty low, so every point matters significantly. Still, it feels to me like there are too many ways to gain points—district completion, district value, cable car networks, bonus tokens, skyscrapers, and skyscraper majority. By themselves, none of these are complex or confusing, but together, they feel a bit overblown. (The half-points also seem like an odd choice; if the values of everything were simply doubled, they could have been done away with entirely.)

The production value of San Francisco is middle-of-the-road. While the 3D skyscrapers and cable car pieces help to bring the player boards to life, the card quality is below average and the card art itself actually gets in the way of the game. The details on the cards are a nice touch in theory, but in practice they make the tableaus look busy and make it difficult to read the board-state at a glance. (The palette of too-similar pastel colors doesn’t help either.) Also, while admittedly a minor annoyance, the game includes no extra baggies for tokens or cards. It just seems like there were a number of silly oversights in the production of this game.

Overall, San Francisco is okay, but it’s only okay. It is a far cry from Knizia’s time-honored greats, and not a game I’ll be returning to frequently. Try before you buy.

San Francisco is a far cry from Knizia's time-honored greats. Try before you buy.