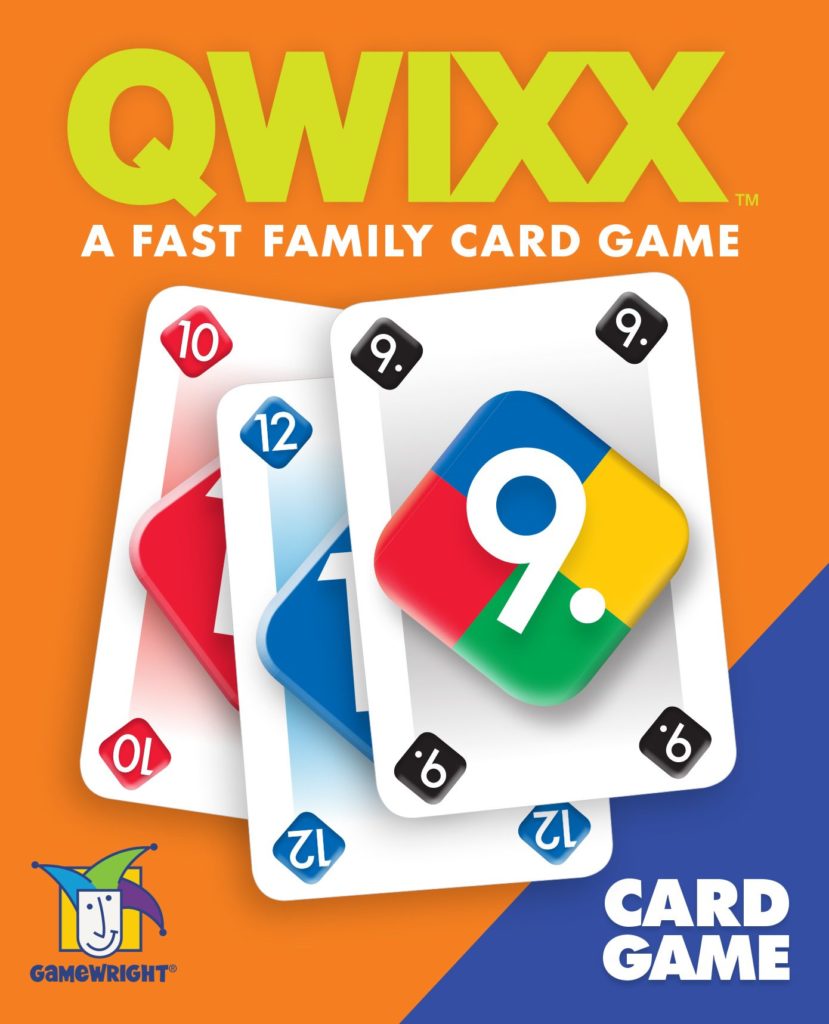 In 2013, Qwixx was nominated for the Spiel des Jahres (Game of the Year in Germany), the biggest award in board gaming. It took a lot of people by surprise to see such a simple game nominated; it was just dice and a scorepad, à la Yahtzee. While it didn’t win, I would consider it the game responsible for kickstarting the “roll and write” genre, which has only grown and grown in the years since. And of course, success means expansions and spinoffs, so here we are with Qwixx Card Game. But is it any good?

It’s often a difficult question for designers to figure out how to maintain the “essence” of a game when converting it from a board game to a dice game, or a dice game to a card game, and so on. Here, the decision of what to keep was fairly obvious: Qwixx Card Game uses the exact same scorepad, and I mean exact: they didn’t even change the symbol for a bad turn (“misthrow” in Qwixx) from a crossed-out die!

So, players are still trying to cross off numbers in ascending or descending order, but the mechanism for how they do that is new. Players have a hand of five cards and draw new cards from a central tableau. The twist is that the cards are all face-down, but the back of every card shows the number on the card (but not the color). After replenishing your hand, every player can cross off the number (in any color’s row) showing on top of the deck, in an attempt to emulate the two white dice in Qwixx.

Then, when a player plays cards, things work quite a bit differently than Qwixx. Players can play up to three cards of the same color, and don’t have to cross off every number played. If they do cross some numbers off, they have to remember the somewhat clunky rule that anything crossed off can only skip at most one number (so 2, 4, 5 is allowed but not 2, 4, 6 nor 2, 5, 6).

Occasionally you’ll play an extra card just to clear up space in your hand and not mark it, but the real appeal of this approach is the ability to have some crazy combo-tastic turns where you play three cards in a row, and lock a row to boot. Since this can happen so quickly, there is another new rule that locking a row doesn’t deny other players the opportunity to play on that row. This is understandable, since you can’t remove all the cards of that color from the deck and the other players’ hands like you can remove the die from play in Qwixx.

So while Qwixx Card Game sufficiently deviates from Qwixx and has some unique cardplay, it’s not without its flaws. While those big turns can be exciting, they can also completely blindside other players and lead to some early, unexpected blowouts, while Qwixx is more evenly paced.  It also feels a bit “rich get richer”; if you play three cards in a turn, you draw three new cards at once, and have a higher likelihood of getting another string of cards to play, while a mixed hand will keep you from playing multiple cards in a turn. I also don’t understand why the array of available cards is face-down; getting the right number only to discover it’s a completely useless color is aggravating. I suspect the game is actually less lucky than Qwixx, but it just feels worse here becuase of the crushed hope in those scenarios.

Overall, Qwixx Card Game is actually a decent game, but its biggest flaw is actually finding an audience. The scorepad and other things that give the feeling of Qwixx are simply done better in the original dice game. For players like me that prefer cards to dice almost every time, I simply find that there are far superior filler card games — Point Salad, Jaipur, Gamewright’s own Abandon All Artichokes — for me to ever want to bring out Qwixx Card Game over its competitors. For those wanting more Qwixx, I suggest finding the alternate scorepads for Qwixx (for example, there is an alternate scoring side in the Qwixx Deluxe Edition).

Thank you to Gamewright for providing a review copy of Qwixx Card Game.