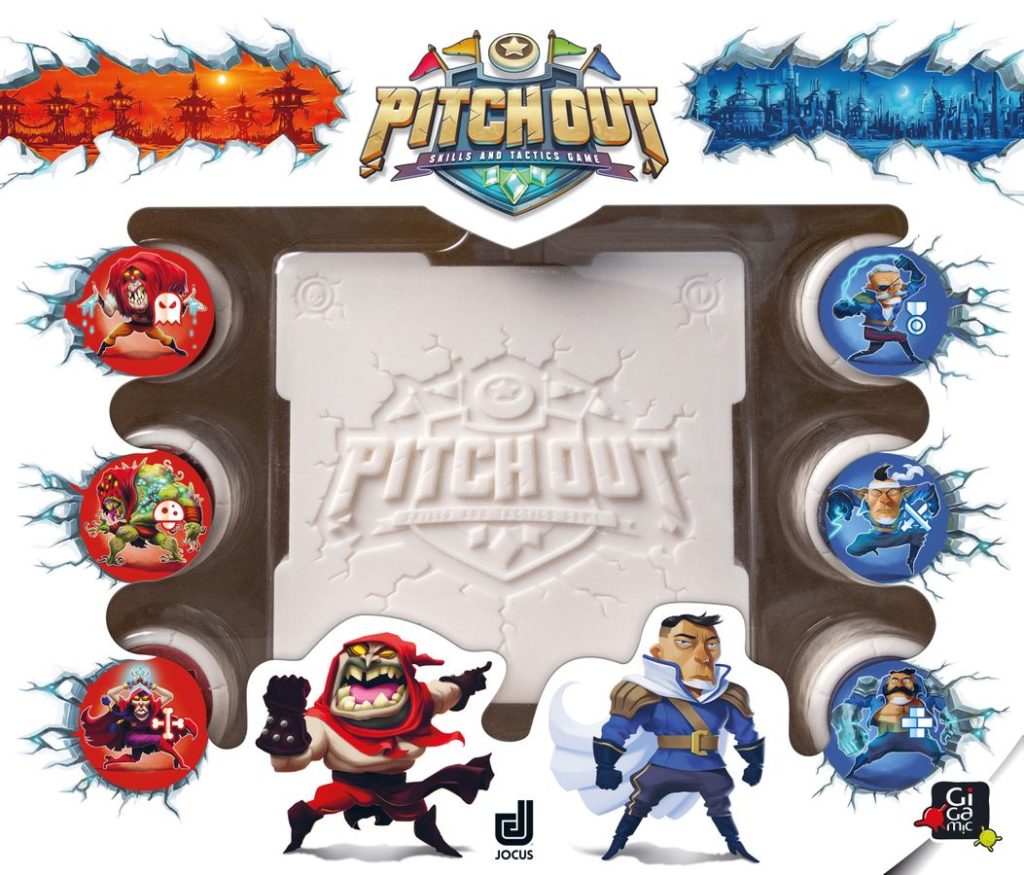 Pitch Out is a new dexterity game which feels like a no-electricity-required cousin of air hockey. This 2-player release from French publisher Gigamic is a super-portable flicking game with cool components. Interestingly, each puck in the game behaves differently, giving the experience a slight strategy element, in addition to the expected dexterity silliness.

Pitch Out is a flicking game for kids and families. The goal of the game is to knock out the opponent’s Captain puck, or to knock out all their other pucks, so that only their Captain remains.

To set up the game, 5 obstacle pieces are placed in the center of the table. The players’ pucks are then placed on opposite sides of the obstacle formation. Each side has 8 pucks, from which a number – usually 5 – are chosen to use.

To play the game, players take turns flicking a single puck in their color.

Anytime a puck goes off the table – regardless of which player owns it – it is out of the game. Interestingly, though, each puck has its own special ability. The basic abilities include:

Each side also has a few special abilities that are unique to them. This gives the game some potential for customization; players can try various character combinations to see what they like best. (As a side note, the tokens that sit inside the pucks pop in and out easily, so they can be switched out without hassle.)

Players go back and forth, flicking pucks around the table. When someone either eliminates the opposing Captain or eliminates all other opposing pucks, the game ends and that player wins.

There shouldn’t be much mystery about whether Pitch Out is a game you’ll enjoy. It’s goofy dexterity fun, equal parts toy and game. If you like dexterity/flicking games, this might be one to check out. If you don’t, it’s probably not for you.

I will say that the inclusion of special powers differentiates this game from most other flicking games I’ve played. By making each piece unique, the game involves a hint of tactical decision-making. If all the pieces were the same, players’ choices would simply be “Which puck looks like it will be the easiest to knock out?” With the abilities, however, the decision becomes “Which puck will be the easiest to knock out, given the abilities I have at my disposal?” It’s obviously not deep – not even remotely – but it has a little extra something to it.

The production quality is high, with durable pieces that slide nicely on the table. The box is pretty flimsy, but it seems players are meant to ditch it altogether; the square obstacle pieces double as puck holders and snap together to make a compact, portable “brick.” This is the kind of game you could easily play while waiting for food at a restaurant, so long as a stray puck doesn’t wind up in someone’s mashed potatoes.

If you are in the market for a super-light, super-fast flicking game, Pitch Out might be one to look into.

A review copy was provided by Gigamic.