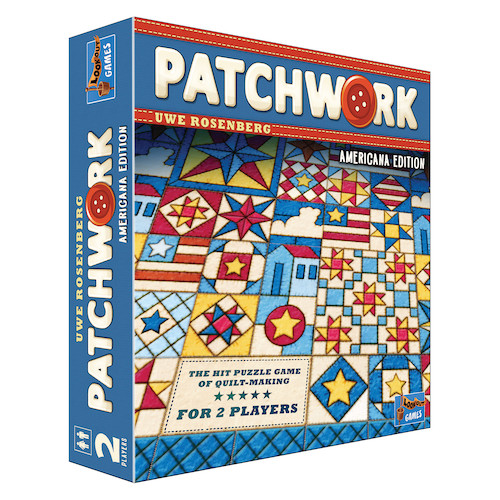 When gamers think of two-player board games, most default to the classic KOSMOS two-player line (Lost Cities, Targi, Jambo). In recent years, however, Lookout Games has begun their own two-player line in direct competition, right down to an identical box size. That line began in 2012 with Agricola: All Creatures Big and Small, but the most successful game in the line is 2014’s Patchwork. Now Patchwork has a fresh new look and a lower price with Patchwork: Americana Edition. Is it still good, six years later? Let’s find out!

Somehow, despite Geeks Under Grace coming into existence right around the same time as Patchwork itself, we don’t have a review of the original. So let’s start with the gameplay, which is identical in Americana Edition.  Look, tile-laying games are not my favorite genre, though I like them fine. I’m also not a huge fan of games with completely open information, which Patchwork has. Yet somehow, to me, this is as close to a perfect game design as any.

There are three main ideas in Patchwork: the Tetris you’re playing on your player board, the economics of buying patches and then generating income back, and the variable turn order on the time track. Quite often I feel like designers have some good mechanism ideas and then artificially smush them together, but in Patchwork, the connection between these three mechanisms is seamless. (See what I did there?) And because the integration is as tight as possible, the ruleset becomes that much simpler for it.

Your first few games, you might be making educated guesses as to which tile to pick, but at the end of the first game you’ll probably start listing off all the things you wish you had done differently. Fortunately, since the game is at most thirty minutes long, it’s easy to play two games back-to-back. Even though all that changes each game is the order of the same set of polyominoes, this has a huge impact on the flow and strategy of the game, and it never feels like the same thing twice.

Furthermore, there are at least two main strategies and a large continuum between them: do you go for a strong economy, generating lots of buttons (which are also points) through income, or do you try to cover as much of your board as possible? Combining this with the need to constantly keep an eye on your opponent, there’s a lot of brain crunch to be had here in a short time.

So the game is brilliant, but what about this edition? This is the best edition of Patchwork, for one simple reason. The MSRP is now a measly twenty dollars. The original edition sold for $35 MSRP, while KOSMOS’s two player line has them selling Lost Cities and Targi for $20 MSRP. Lookout Games came ready to compete this time, and the consumer is the one who wins.

While I suppose some players (particularly people outside of America) may not enjoy the new artwork, I really liked it. I know several people who have this style of decoration in their houses out in the country where I live, so it felt “homey” and relaxing to me. I was concerned that too many of the same colors would make distinguishing features (e.g. buttons for income) difficult, but we never had a problem.

This is the part of the review where I would normally start going through my complaints with the game, but I literally can’t think of any. I mean, some people are just not going to enjoy this style of game, and that’s okay. Everyone else, go pick this up. Patchwork is truly a modern classic, and it’s cheaper than ever.

Thank you to Asmodee North America for providing a review copy of Patchwork: Americana Edition.