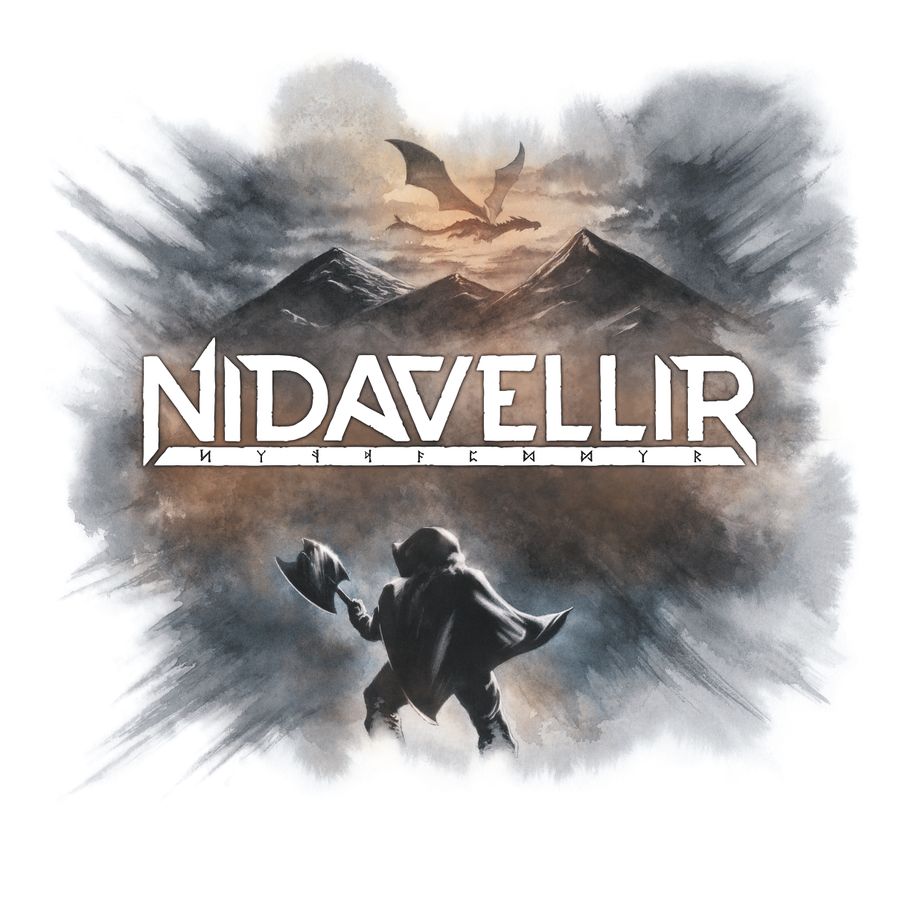 Nidavellir is a game of card drafting and tableau building. In this game, players take turns selecting cards from a central display, using blind bidding to determine the turn order. In an interesting twist, however, players’ bidding power can increase as time goes on! It is a fantastic game, simple to teach and fun for a wide range of ages and experience levels.

Nidavellir is the latest game from Serge Laget, whose reputation as a top-tier designer goes back more than 2 decades. In this game, players assemble armies of dwarves to combat the evil dragon Fafnir. Searching for willing fighters in taverns across the land, their goal is to earn the most Bravery points.

To begin the game, each player receives an individual tableau board, a numbered gem token, and a set of 5 coin tokens.

On the left side of every tableau board are 3 spaces for coins, each bearing a different icon. Each turn, players will place coins here, face down, to bid for turn order. Since each person has 5 coins to choose from, the 2 unused tokens each round are stored in the “pouch” slots at the bottom-left.

In the center of the play area, a display of dwarf cards is laid out, with cards placed below each of the 3 tavern signs. (Note that these signs match the images on the player boards.)

Dwarf cards come in 5 colors, and at the end of the game, each color is scored differently.

To start each round, players secretly assign their bidding coins to the slots on their tableaus. Then, once everyone is ready, all players reveal their topmost token. The player with the highest-value coin gets to go first, drafting a card from the green tavern display. In case of a tie, the player with the higher-numbered gemstone token gets priority.

This player has placed her 5 bidding tokens, 1 on each of the 3 taverns and 2 in her pouch.

When ties occur, gemstones are swapped between the tied players. This helps to keep things fair; if a player loses a tie on one turn, they will have the advantage on a later turn.

Once all players have drafted a card from the green tavern, they reveal the coins in the red slots and draft from the red tavern, and then repeat this for the blue tavern.

As players collect cards, they form Splendor-style columns in their tableaus. Anytime a player completes a set of all 5 card colors, they draft a hero card. Heroes are special cards that are significantly better than regular dwarves. They offer a variety of bonuses, and through clever planning, players can make cool combos with them.

In this example, when the player completed a set of all 5 colors, she drew a hero card (the topmost card on her green column). Notice that this hero is worth 2 green symbols, meaning it acts as 2 green cards!

As an example, suppose Player A placed her 2- and 4-value coins in her pouch, meaning she opted not to use them this round. She bid on the red tavern using her 0-value coin. When this coin is revealed, she adds together her unused coins (2 + 4 = 6), takes a coin of this value, and replaces the higher-value token in her pouch (the 4) with it. Next round, she will be able to bid with a 6 instead of a 4!

This rack holds and organizes the coin tokens.

The game is divided into 2 halves. At the midpoint, players can earn bonuses for having the most dwarves of a color. Then, at the end of the game, players calculate their points earned from cards and bonuses, plus the value of their coins. The player with the most points is the winner!

The game includes 4 of these plastic card racks to hold special cards. The bonus cards are shown here.

Nidavellir stands out as one of the best games I’ve played in recent memory. It is simply fantastic.

This game is very easy to learn, but it is chock-full of compelling decisions. It has a natural crescendo as players upgrade their coins and increase their bidding power; by the final round, players will have lots of clout in determining who goes when in the draft order. The game presents an interesting push-and-pull, since the only way to get better coins for the future is to bid low now. This makes the decisions all the more difficult, since players need to balance bidding low with getting a card that is actually useful.

Since players can see each others’ tableaus, there is great potential for “hate-drafting.” On top of this, since players are vying for majorities in each color, there is a strong sense of one-upsmanship as everyone tries to stay one step ahead of their opponents.

The production quality in Nidavellir is nice, though it is mostly just cards and tokens. The card holders and coin display work well and the box art is dynamic, with a lovely linen finish. All in all, this game feels like a quality product.

I am extremely impressed with Nidavellir. It fits into the same weight category as games like Sagrada, Splendor, and Century: Spice Road, and I think it will appeal to folks who – like me – love the classic simplicity of those games. I do not consider 2020 to have been a very strong year for tabletop games, but Nidavellir is a definite exception. Now that this game is seeing wider distribution, I suspect that it will blow up in popularity. I highly recommend checking this one out.

Thingvellir is the first expansion for Nidavellir. This small box is light on components, but it adds an entirely new strategic element to an already-fantastic game.

Thingvellir includes a handful of new cards, an extra sign tile, a scorepad, and some tokens. Like the best expansions, it is very easy to plug into the base game, and it does not require much in the way of extra rules overhead.

The main change this expansion offers is the addition of a camp location. Like the regular tavern locations, the camp has its own row of cards.

During each of the 3 drafting rounds, the player with the highest bid may choose – instead of taking a card from the tavern – to take one from the camp. This makes going first even more powerful, since it provides a whole other set of options. What’s more, the cards in the camp are amazingly useful. Some grant ongoing abilities and others offer dwarves that can be used for 1 of 2 different colors. Examples of special abilities include…

… and many more like these. The camp cards ramp up the strategy by providing new choices and opportunities for mega-points.

Without adding much complexity to the game, Thingvellir deepens the play experience. For this reason, it is worth checking out if you enjoy Nidavellir. (And seriously, how could you not enjoy it?)

Review copies of Nidavellir and Thingvellir were provided by Hachette Boardgames.

Nidavellir is fantastic, easily one of the best games of 2020. Highly recommended.