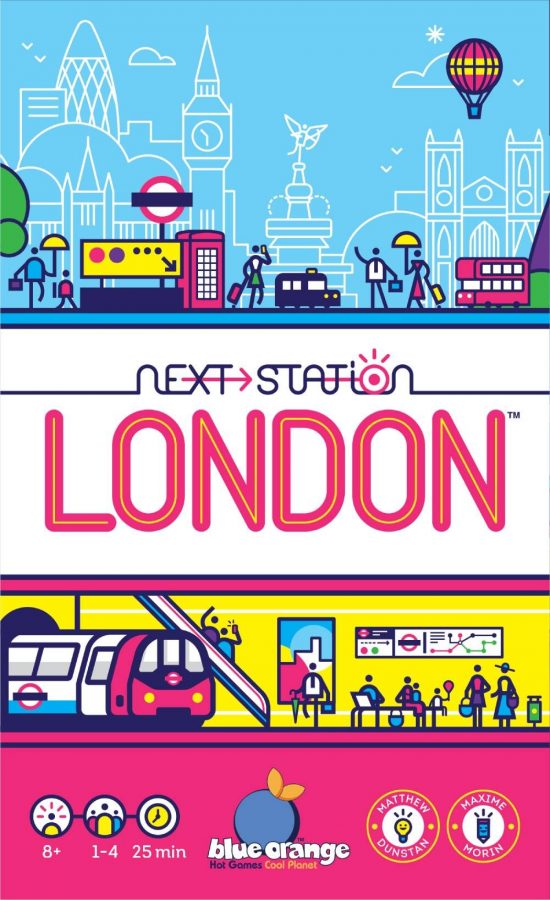 Next Station: London is a new flip-and-write game about building routes for the London Underground. In this game, players use 4 differently colored pencils to draw routes and try to earn the most points. The roll/flip-and-write genre is quite crowded these days; how does this one stack up?

In Next Station: London, 1-4 players are city planners crafting train lines for the London Tube. The game is played over 4 rounds, with the goal of earning the highest total score.

At the start of the game, each player gets their own sheet or paper and colored pencil. Throughout the game, the pencils are passed between players, such that each player uses each pencil for 1 round.

To play a round, players flip cards 1 at a time, revealing different shape icons. Beginning with the station of their pencil color, players draw lines to nearby stations according to the cards that are revealed. For example, if a triangle card were revealed, all players would draw a line to a triangle station on their sheet. Newly drawn lines must be straight, must continue the current route, and cannot intersect other, previously drawn lines.

As routes are created, players work toward several objectives. Ideally, routes should cross the River Thames, extend into multiple map regions, reach special sites, connect multiple lines to single stations, and have numerous stops in a single region. Like most games with competing objectives, though, it is hard to accomplish all of these tasks, and therein lies the strategy. As an added wrinkle, players can’t be sure how long a given round will last. The deck includes 5 pink cards that, when all are drawn, signal the end of the round. This means that players could have as few as 5 or as many as 10 turns with a given color. These factors together give the game a surprising amount of planning and strategy.

At the end of each round, players pass the pencils, shuffle the deck, and a new round begins with each player drawing a different train line. The game concludes at the end of round 4, at which point all players will have created a unique subway map.

Also included in the box are cards for advanced gameplay. These offer additional, public objectives and special, color-specific abilities. They add very little complexity to the game, so they are easy to add and remove as desired.

I found Next Station: London to be a pleasant surprise. Having played many Blue Orange titles over the years, this is among my favorites, up there with Kingdomino, Slide Quest, and Bag of Chips. It is more strategic than this publisher’s usual, child-focused fare, which should give it broader appeal in “gamer” circles.

Given the overwhelming number of roll/flip-and-write games coming out these days, I’m surprised that I haven’t seen more that use this idea of differently colored pencils that get passed between players. It seems like such an obvious mechanism, but I don’t know of any other games that do it. It’s cool and unique. (That said, I do wish the game included a pencil sharpener.)

The simultaneous play style means there is next to no downtime. The game moves along at a brisk pace; start to finish is rarely more than a half-hour. As a counterpoint, there is no real interaction between players, which may be a pro or a con depending upon your taste.

The production of Next Station: London is nice. The game sheets are double-sided, the box is compact, with a chic magnetic clasp, and the stylized art brings out the theme of public transit. Overall, it’s a well-produced game.

I have always loved subways and subway maps, so this game really strikes a chord with me. In the crowded genre of roll/flip-and-write games, Next Station: London manages to do something new and different. It’s a strong design, and I recommend checking it out.

Next Station: London is a strong flip-and-write game, one of my favorite Blue Orange offerings.