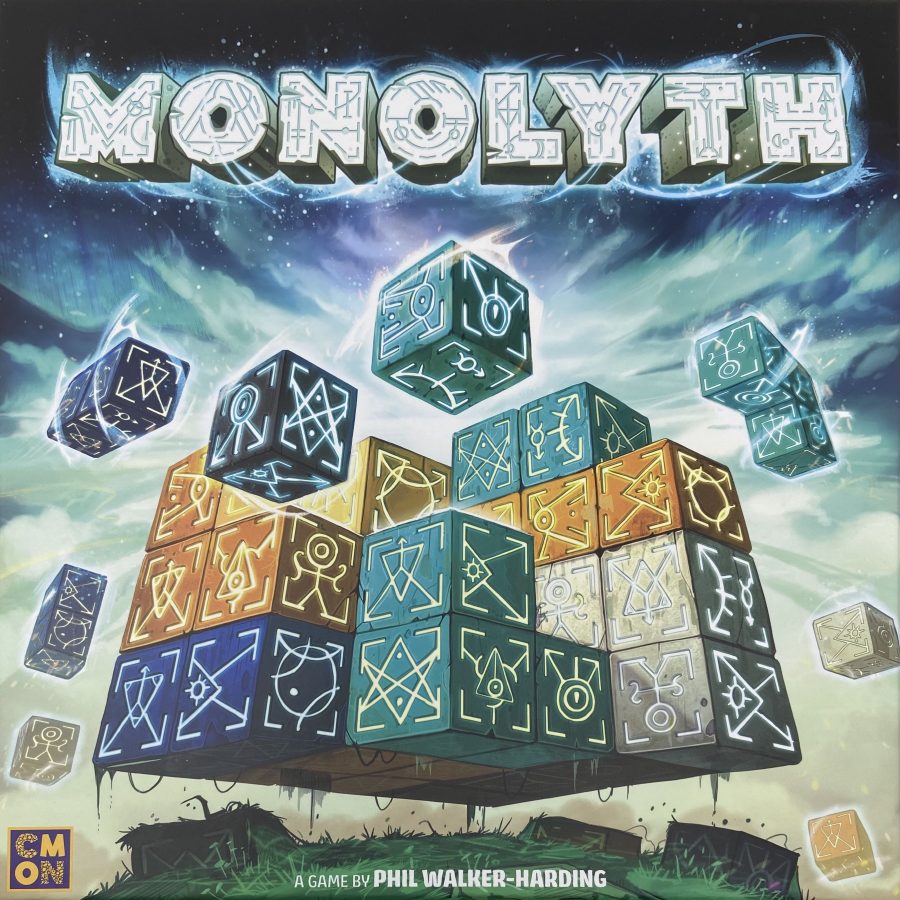 Monolyth is a new release from acclaimed designer Phil Walker-Harding. In it, players build 3D block structures meant to represent ancient, mysterious monuments. It has a striking table presence and a strong toy factor, but how is the gameplay?

It’s not Stonehenge, it’s Monolyth! In this 1-4 person game, players take turns choosing and placing block pieces to build a 3D structure. The goal of the game is to earn the most points, and points are awarded based on how the structures are built.

To begin the game, players seed a central board with point tokens in various denominations. Then, in the spaces around the edge, they place randomly-drawn polyomino pieces (a crystal standee begins in topmost space).

The polyominoes come in 5 colors and several shapes, and a supply of size-1 pieces (i.e. cubes) is placed nearby. Each player receives a small 4×4 grid board, on which they will construct their tower.

On a player’s turn, they must either move the crystal standee and place a block or make a prophecy. If they wish to place a block, they move the crystal 1-4 spaces clockwise around the edge of the board. Wherever they stop, they take the block in that space and either add it to their tower or discard it in exchange for a size-1 block of the same color. The space the crystal moved from is then refilled with a new block, drawn at random.

If a player wishes instead to make a prophecy, they take a prophecy token from the board and slot it into their tableau in 1 of the 4 notches around the edge. Prophecies are essentially bets about how the structure will look at game end. Each edge of the player tableaus is colored, and ideally, players want to place blocks of the matching colors along the edges.

The number on a prophecy token indicates how many squares of the matching color the player thinks will be on that side of the tower at the end. For example, if a player places a 9-value token on the orange edge of their tableau, they are predicting that that wall will contain at least 9 orange squares by the end. The lower the number, the more likely a prophecy is to be fulfilled, but the less it will be worth. Higher numbers are trickier but they offer greater rewards.

The game ends when a player completes the top level of their tower. At that time, players total their points from level, structure, and prophecy tokens, and the player with the highest score wins!

Monolyth feels like a mashup of a few games I really enjoy. It takes the circular drafting system of Patchwork, mixes it with a scoring mechanism right out of Barenpark (another Phil Walker-Harding design), and sprinkles a bit of Pueblo on top. Admittedly, this game doesn’t do anything super new and innovative—I’ve seen all its mechanisms before—but it is a fun experience nonetheless.

The core decision of “place a block or make a prophecy” is very straightforward, so the game is simple to teach and understand. Turns tend to be quite snappy, which keeps the downtime from becoming an issue, and it’s really fun to watch the structures grow as play progresses. Given that each player is focused on their own tableau, there is little interaction or hate-drafting. Typically, players are only interested in each other’s tableaus insofar as watching when opponents are close to completing levels and/or ending the game. Rarely would a player make a decision based on an opponent’s situation.

The production quality of Monolyth is strong. The blocks, obviously, are the stars of the show, and while they aren’t as hefty as I might have liked, they are tactile, vibrant, and nicely detailed with faux-hieroglyphics. I would have preferred if, instead of cardboard, the crystal standee had been an actual, plastic crystal piece, but as it is, it works fine. The board is easy to read at a glance, and the rules are clear and concise. All told, Monolyth is an attractive product with a great toy factor.

Phil Walker-Harding has a distinctive design style, and Monolyth fits right into it. Again, nothing in this game is revolutionary, but it’s a solid combination of time-tested mechanisms. Fans of Walker-Harding will enjoy it, as will folks who are new to gaming or who simply like breezy fun.

Monolyth borrows from a number of great games to create a solid experience. It's nothing revolutionary, but it is yet another strong offering from Phil Walker-Harding.