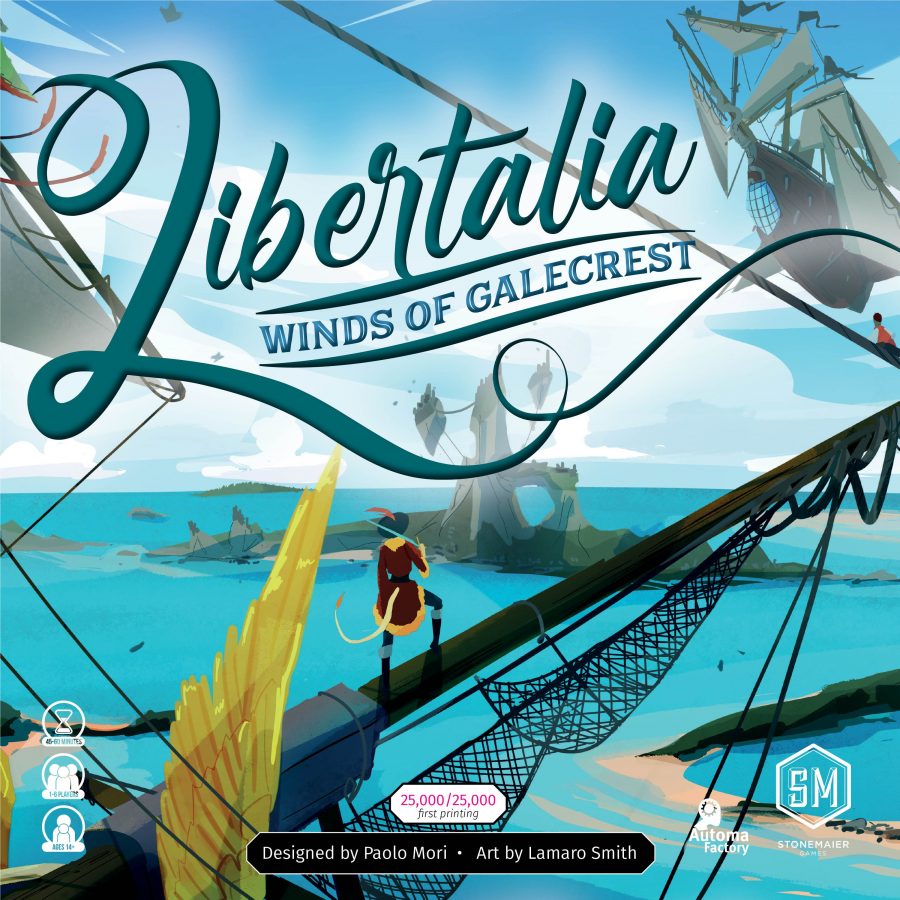 Libertalia: Winds of Galecrest is a remake of Paolo Mori’s popular Libertalia. With a new art style, beautified components, and additional content, how does the game hold up a decade after its original release? Let’s check it out.

After years out of print, Libertalia is back in a brand-new edition from Stonemaier Games. Having never played the original version, I had no expectations coming in, but I had heard lots of positive opinions over the years.

In Libertalia: Winds of Galecrest, 1-6 players set sail for pirate-y adventure. The game takes place over 3 voyages, each of which is divided into a number of days/rounds. Card play is at the center of the experience. Each player has a deck of 40 character cards, from which they draw their hands throughout the game.

The object of Libertalia is to earn the most points/money. At the beginning of each voyage, 1 player draws a hand of cards from their shuffled deck, and everyone else fetches the same cards from their own deck. In this way, everyone begins the game with the exact same hand. (Players’ hands will remain similar throughout the game.)

At the start of each voyage, a number of loot tokens are dealt out to the different day spaces; each day in the voyage contains as many loot tokens as there are players. Most loot is good, but some inflict negative consequences. A day begins with everyone simultaneously selecting a card to play. Cards are numbered 1-40, and they include 1 or more actions that trigger during the daytime, dusk, nighttime, or end of voyage phases.

Once everyone has chosen a card, cards are revealed and placed in numerical order on the board. Ties are broken based on players’ reputation, which can fluctuate throughout the game. In ascending order, each player resolves the daytime effect on their chosen card. Then, in descending order, everyone grabs a loot token and resolves their card’s dusk action. Some actions will cause an opponent’s card to be discarded; if this happens, that opponent will not resolve their action or gain loot. (Since some loot is harmful, though, missing out on it can actually be a good thing!)

As players collect loot and resolve dusk actions, they return their own cards to their personal tableau. For the remainder of the voyage, any cards in a tableau that have a nighttime action are activated during every nighttime phase. This means nighttime cards can be activated again and again.

At the end of the voyage, players trigger any end of voyage effects on their cards. They also score points based on the loot they have collected. (Some loot tokens even grant actions during the day phases.)

The voyages last 4, then 5, then 6 days, for a total of 15 turns. After the final voyage has been scored, the player with the most points wins.

Libertalia: Winds of Galecrest is absolute chaos, and it’s hysterical. This game feels like Citadels on steroids—the zany character interactions totally make the experience, and they are even more pronounced than Citadels because of the sheer number of different cards.

Given its wild unpredictability, it can be tough to form a meaningful strategy in this game, but the overall experience is fun anyway. And to its credit, Libertalia does have some interesting nuances. For instance, players typically keep a couple of cards in between rounds, so while their hands begin identically, they tend to differentiate as new cards are dealt in later voyages.

In typical Stonemaier fashion, the production of this game is stellar. Each character is uniquely illustrated, the board is easy to read, the rules are clear and concise, and the loot tokens have a great tactile quality. Some folks were unhappy about the new art, but I don’t mind it personally. All in all, Libertalia: Winds of Galecrest is a lovely production, well worth the price point.

As much as I enjoy this game, it is definitely not for everyone. I can easily see some people being turned off by the level of chaos. If you look for long-term strategy in games, this one is probably not for you. However, if you enjoy lighthearted games full of tactical interaction and swashbuckling silliness, check out Libertalia: Winds of Galecrest.

A review copy was provided by Stonemaier Games.

Libertalia: Winds of Galecrest is pure chaos, but it's hysterical to play. Recommended for folks who like to laugh in games.