Review – Heat: Pedal to the Metal 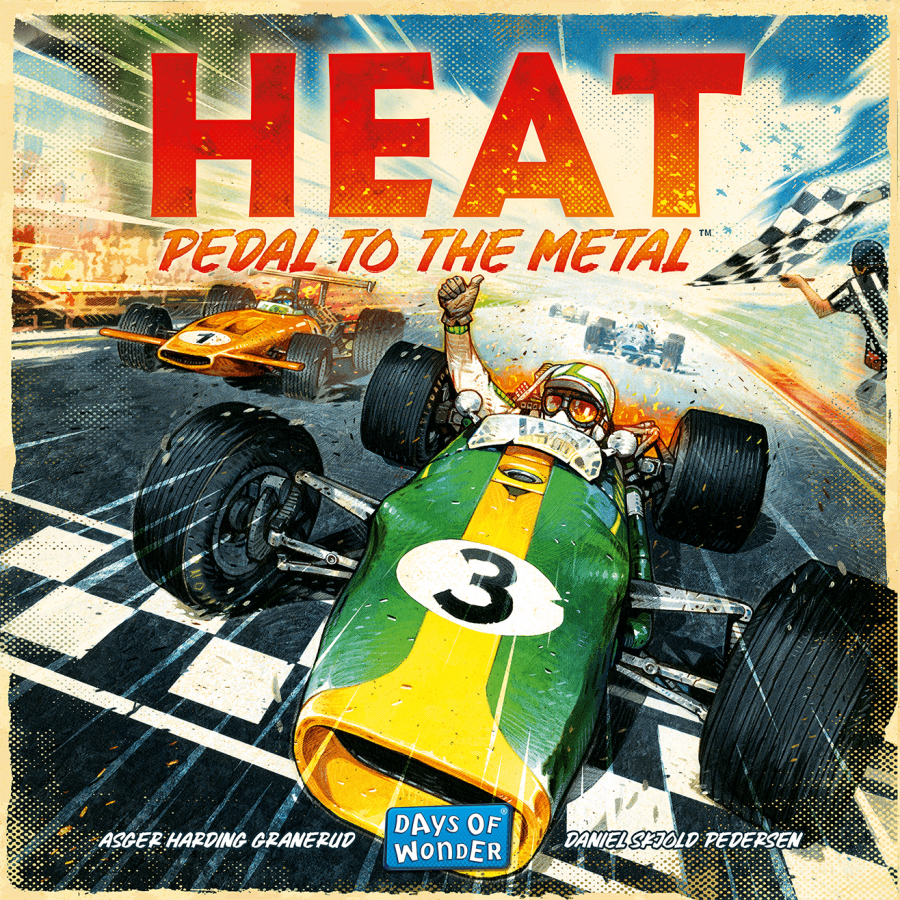 For a long time, Days of Wonder has been built on four pillars: Ticket to Ride, Small World, and Memoir ’44. Wait, I said four pillars. The fourth was always what they now call their “Big Adventure” series: players could always look forward to a new, unique game annually, knowing the game would be gorgeously produced if nothing else. Yet it’s been a few years with no new “Big Adventure” title, and several years more since one was deeply successful (Five Tribes or to a lesser extent, Quadropolis). But Days of Wonder is finally back at it with Heat: Pedal to the Metal, their first ever racing game. How is it? Let’s take a look! 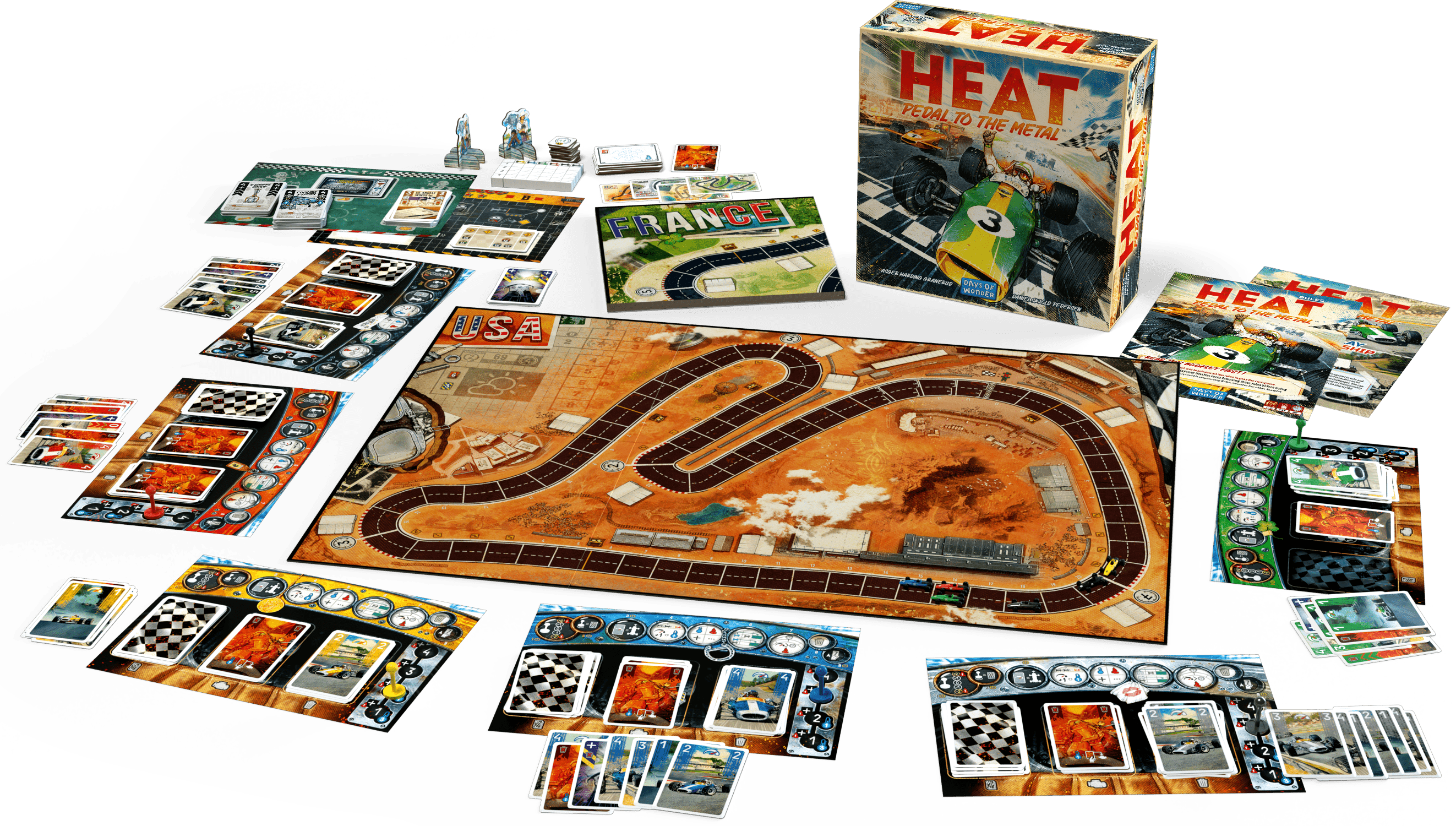 I had five immediate reactions when Heat was announced:

A new Days of Wonder game!!

Wow, what a dumb subtitle.

Wow, those racecars are small.

Well, I can’t do anything about the subtitle, but I will say that the artwork is wonderful. Vincent Dutrait has never disappointed, and while this is quite outside his norm (notice the distinct lack of people and faces), he did a great job. I still think the race cars look ridiculous when you pull the game out, but somehow that issue disappears when you’re actually playing. You kind of mentally “zoom in” on where the race is happening and then suddenly the perspective and proportions feel correct.

But, man, the game is still $75, making it probably the most expensive game Days of Wonder has ever made (outside of anniversary and collector’s editions). Is it worth it?

Well, there are a lot of components. Sort of. There’s not a lot of unique components: player boards, racecars, gear pawns, cards, and game boards. But there are hundreds of cards, and two double-sided (!) gigantic game boards. I am assuming the game boards are the main reason for the high price. There’s also a really fantastic insert, with wells for the cards that hold sleeved cards (I used Gamegenic Standard American sleeves) perfectly.

However, I’ve been saying for a while that we should judge a game’s cost by its quality and not entirely by its components. Fortunately, Heat delivers.

First, the game’s gotta be fun, and it is. For me, I was actually somewhat suspicious of the title because I  associate racing with NASCAR, which I then associate with hillbilly relatives and people dying in fiery car crashes and “Let’s Go, Brandon.” I also don’t care much for dice, so games like Formula D or Camel Up are not interesting to me. However, Heat is very much a card game, with a tiny bit of deckbuilding, where you are basically gaining and then trashing “Curse” cards (think Dominion) from your deck.

Both hand management and deck management are incredibly important, from managing those cursed Heat cards, to using the Stress cards at the right times to flip through your deck, and much more. These moments, of course, are inextricably tied to where you’re at in the race, in terms of the map itself (primarily when you’re near corners), but also where you’re at in relation to your opponents. There is definitely some strong interaction, which comes out psychologically as you try to predict what opponents might do. Slipstreaming provides a great benefit if you can time it around other players’ actions, and there are distinct advantages to being in last place (“Adrenaline”) at just the right time.

For a lifelong card gamer like me, I really enjoyed the card-driven gameplay. But the real kicker is how that gameplay is combined with an extremely high fun factor. It looks cool. It’s tense the whole time. It plays fast. It kind of feels like you’re a kid playing with Hot Wheels again. That would be enough for me to choke down the $75 price tag.

Not only is it a great game; the box is absolutely stuffed with content. In addition to the four different maps, there is an entire second rulebook of bonus modules. The Garage module provides custom upgrades (and once you add this, there’s no going back); the Legends module adds simple AI players for a more crowded race or solo play; the Weather module adds weather and road conditions to change up the tracks from game to game, and finally there’s a Championship mode where you play a “season” of races across all of the maps. I look forward to eventually having a free Saturday where friends and I play through a whole championship. (You know, once my kids are grown up…)

I do have a complaint, and it’s that the rules kind of suck. With two rulebooks, it’s often more of a problem that important information is split across both rulebooks (looking at you, Fantasy Flight), but here it’s moreso just that the main rulebook is worded pretty terribly. Some examples among many: “All players complete steps 1 and 2 at the same time (do them in order, but without waiting for each other). Then proceed to steps 3-9 once everyone has finished these two actions.” Does this mean everyone does step 3, then everyone does step 4, or does player one do steps 3-9, then player two does steps 3-9, and so on? We figured it out, but the rule isn’t clear. Another example: it’s never really clearly stated if the standard “0” and “5” Upgrade cards count towards your Speed, since that’s essentially what they do; it’s just clearly stated that they don’t count as Speed cards for cards you reveal due to Stress. The rulebook is littered with imperfections like these, and I had to watch several videos before I tried to teach it. If you know the rules inside and out and have a good teacher, you’d never notice these issues, but I hope they update the rulebook on a reprint.

While rulebook complaints are a big concern, they don’t change the fact that this an amazing game. The gameplay is fast, fun and interesting, the artwork and components are fabulous, and the game is stuffed to the brim with content. Easily one of the best games of 2022.