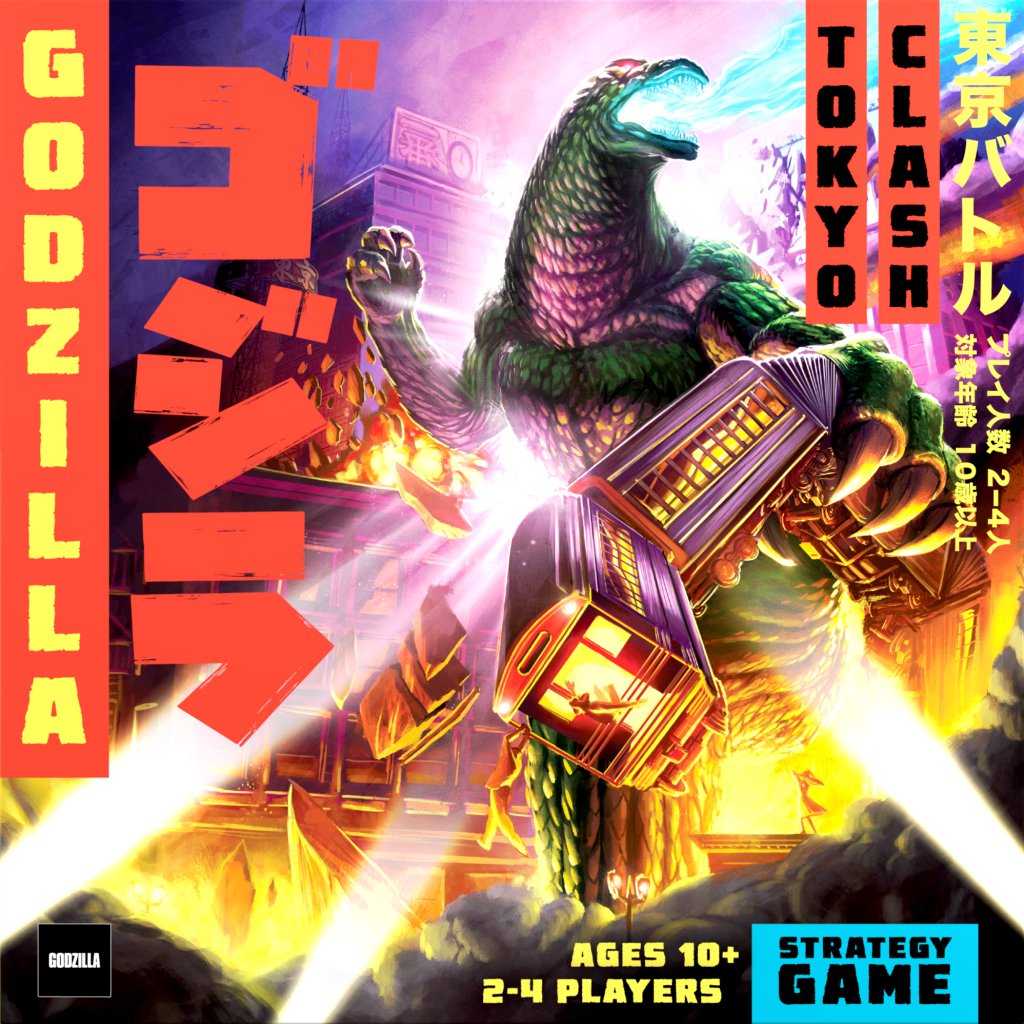 Godzilla: Tokyo Clash is an all-out kaiju battle on the tabletop. In this game, players assume the roles of classic Godzilla monsters and duke it out, throwing around cars, trains, and sometimes each other. It is a fairly simple, family-weight game with great production quality.

At the start of the game, each player takes the character mat, figure, and card deck for their chosen monster. An energy cube begins on the “2” space of each mat.

(Here, Ghidorah also has the “King of Monsters” token, which means he goes first and earns a slight bonus. Throughout the game, this token will move from player to player as the monsters bash each other around.)

The shape of the play area depends upon the number of players. Many of the board hexes contain spots for vehicle tokens and large or small buildings, which are placed during setup.

A game set up for 3 players.

To play the game, players take turns using or discarding cards until everyone has passed in a row. Unlike many games where passing means players may no longer play for the duration of the round, in Godzilla: Tokyo Clash, a player may pass on one turn, but then jump back in and take an action on a subsequent turn.

Each character’s deck is unique. Here is a sampling of cards from Godzilla’s.

The goal of the game is to earn the most points, something players accomplish by damaging opposing kaiju.

To play a card, the active player must pay its energy cost, shown in the yellow box in the upper-right. The player moves their energy cube down this number of spaces on their mat and executes the card’s action. If a player does not have enough energy to play a card, they cannot use its ability, but may instead discard it to activate one of their character’s special “discard abilities.” This is a cool aspect of the game; basically, it means players always have options. If someone cannot afford to play a card, they can discard it to do something else instead.

Cards often allow players to move, attack, or defend. Attacking is the core of game (no surprise there), and it either involves throwing things or engaging in direct combat with an opponent. Vehicles and buildings grant energy rewards when destroyed, and since energy is needed to use cards, the more rampant the destruction, the better.

Mothra just earned 7 energy by throwing a vehicle into a skyscraper.

When a player damages an opponent, they get to draw cards from the opponent’s deck equal to the damage dealt and keep the card with the highest “Dominance value” as a trophy. The Dominance value is shown in the lower-right of each card, and it acts as victory points when claimed as a trophy. At the end of the game, the player with the most Dominance points wins the game. (The King of Monsters token is worth 2 Dominance, as well.) As a side note, if a player draws only 0-value cards from an opponent’s deck, they do not get to keep any as trophies.

A time track determines the length of the game. Thematically, the humans are building an “Oxygen Destroyer” to ward off the monsters, and in each round after the first, the weapon’s development progresses.

When players collect trophies, they are stored in their characters’ slots on the time track board. In this example, notice that each of the 3 players has collected a trophy.

The circular Oxygen Destroyer token moves along the track toward the “End” space, but as players destroy small buildings – the little square tokens – they are placed on the track, going in the opposite direction. (In the image above, 5 of them have been placed so far, starting from the space designated for a 3-player game.) When the Oxygen Destroyer token passes the building tokens on the track, the game ends and the player with the most Dominance wins.

Godzilla: Tokyo Clash is an enjoyable romp, chock-full of monster mash action. The notion of Mothra chucking a train at Ghidorah is perfectly cinematic, and it really makes the experience come to life. Playing this game feels like acting out a Toho movie on the table.

The game’s production is attractive, particularly the monster figures and plastic buildings. The board has a cool, gritty look to it, and the box art features a playfully vibrant color palette. All in all, Tokyo Clash is a nice looking product.

Unfortunately, though the play experience can be quite fun, it feels like this game does not live up to its full potential. There seem to be 2 reasons for this. First, the rulebook lacks clarity in some key areas. Upon consulting the BoardGameGeek rules forums, I found that others had the same questions I did, pertaining to some pretty fundamental aspects of play. Second, and more importantly, the game has several rules that just feel fiddly.

For example, the rule that says players cannot claim 0-value Dominance cards seems extraneous. Obviously, they aren’t worth any points, but this limitation still feels unnecessary. In some ways, I think players should be able to keep these cards – not only would it eliminate a fiddly rule, but it would keep everyone guessing about how many points their opponents have. (i.e. A player might have several trophies, but for all their opponents know, they might just be a bunch of 0’s!)

Similarly, the combat rules do not feel intuitive. If a monster gets hit with a vehicle, for example, that monster receives damage, BUT if a monster gets thrown, the monster does not receive damage, UNLESS it is thrown into another monster, in which case both monsters take damage. Even if these rules make sense thematically, they still feel overblown.

All told, Godzilla: Tokyo Clash has the potential to be a lot of fun, but players may find that it gets bogged down by extraneous mechanisms and unclear rules. Some folks will be able to look past this – after all, the game is very thematic – but others may find it a bit lacking.

A review copy was provided by Funko Games.