Slay the boss and escape the Dark Castle ! 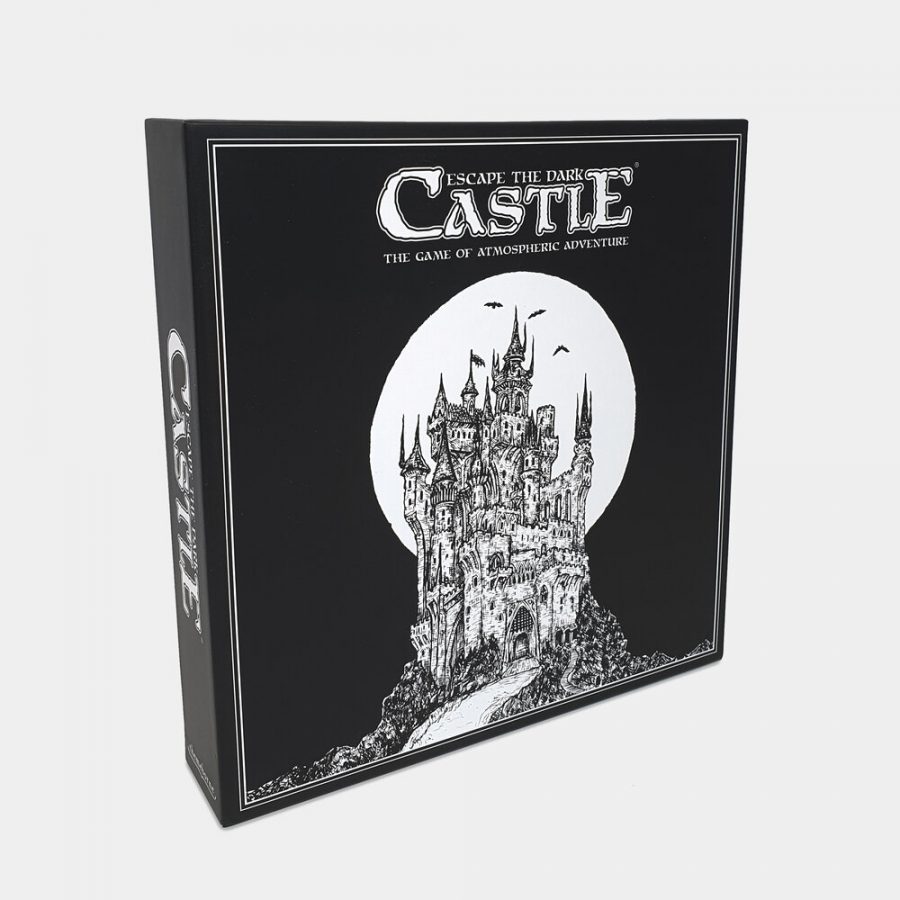 Choose-Your-Own-Adventure meets dungeon-crawling. Sure, it’s been done before, but Themeborne presents the wildly accessible and fully-replayable Escape the Dark Castle to help wrangle in those who turn their noses up at such foolishness as dungeon-delving.

Perhaps you’re thinking, “Ah! A short, easy-to-learn game to play with kids!” Perhaps, but a fair warning: the artwork, while not visceral, depicts spirits, demons, bodies with wounds, etc. It’s all in black and white, but it’s still there.

In Escape the Dark Castle, players will work together to, you guessed it, escape the dark castle. Each person has been wrongfully convicted and must do all they can to escape the surprisingly haunted catacombs and corridors.

To set up, players will shuffle 15 of the 45 chapter cards between 1 of the 3 bosses (randomly chosen) and the introduction card (boss card on the bottom; intro card on top). All these cards are oversized, which creates lots of room for the creepy, inky art and the text. Players will also record their prisoner’s name and starting health (health dependent on the number of players).

During a round, players will decide who draws the next chapter card. Often, players will want the prisoner with the most health to draw the next card because traps and ambushing enemies will immediately harm whoever drew the card. The chosen player will then read the text, often offering a choice to the players, and the players decide what to do from there.

Most chapters include combat and/or skill checks. Combat involves players rolling dice and seeing if they can match any of their rolled symbols to the enemy’s dice, which act as the enemy’s health. If a match occurs, that health dice is removed. Skill checks require players to roll a specific icon. Succeeding usually means drawing an item from the item deck. Players can only hold 2 items (1 in each hand), so creating a diverse party is essential if you want to make it out alive.

The components are great. The custom dice are chunky and tactile, the oversized cards look great, and the included notesheet, while unnecessary, adds to the feeling of the game. What I like about the oversized cards is that they have just the right amount of text to read for this game: enough to set the scene, but not enough to be overburdened (the art also compliments the scene-setting text well). The rulebook is quick and clean. There are also enough cards included to play 3 times without seeing doubles of either chapter cards or boss cards.

In a tabletop age where cooperative dungeon-dives boast 50+ page rulebooks and 2+ hour playing times, Escape the Dark Castle is refreshingly simple. Flip a card over, complete the chapter, repeat until you all die or defeat the boss. Escape the Dark Castle doesn’t advertise itself as an advanced dungeon-crawler, nor does it promise branching storylines with 40+ endings, but I do want to note what this game isn’t.

Escape the Dark Castle isn’t a game full of meaningful choices or even a cohesive story, it’s not a game with layered strategy, and it’s not a game with a bunch of different encounter types (though expansions do help with that). Often I found myself thinking, “Hey, this chapter card is just like that other card, only the numbers, artwork, and text are different.” The repetition helps keep the game simple, and the chapters are varied enough that it’s not blatant, but don’t expect unique encounter every time.

Escape the Dark Castle comes as-advertised. It’s a “retro-atmospheric adventure” that can be a lot of fun with the right group. Go through the castle, encounter bad guys, and see what happens! Don’t expect anything more than that, and you won’t be disappointed.

More interested in Sci-Fi? Check out Escape the Dark Sector.

As-advertised: linear, atmospheric, light on strategy, and plays like a randomly generated dungeon.