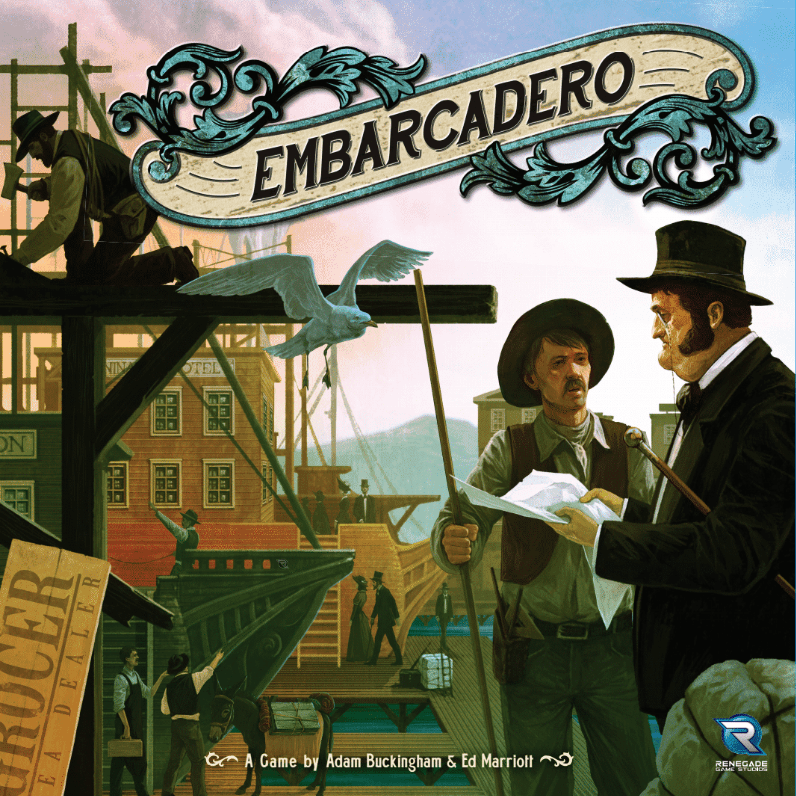 Embarcadero is a euro-style game about building up the San Francisco waterfront at the height of the Gold Rush. As a flotilla of abandoned vessels waits idly in the bay, entrepreneurs repurpose them for business ventures. Who among them can gain the most influence in the burgeoning city?

In Embarcadero, players are pioneers working to settle San Francisco. They aren’t the first to come to the city—many of the initial settlers ran off in search of gold—but they are building a wharfside district on the derelict ships left in the water.

The game is played on a central board representing the San Francisco Bay. The board is divided into a land section and a water section.

Each player begins the game with a hand of ship cards and building cards, as well as an individual tableau with the building tiles and structures in their color.

A game of Embarcadero lasts 3 rounds, each consisting of 5 turns. On a player’s turn, they resolve an action and a buy. The actions a player can choose from are:

Once the active player has taken an action, they must purchase a card from the market. Cards costs vary—some are free, some cost $2 or $3—but after a player has purchased a card, they choose one from their hand to reserve for the coming round. In this way, they set aside a card each turn, and the pile of cards they create becomes their future hand. This forces players to consider what they need now versus what they might need in the coming round.

Whenever a player builds a structure, if it is adjacent to an opponent’s structure, the player can advance on the council track. This represents their character gaining a political foothold in the city. The council track provides bonuses like free resources, end-game points, etc.

At the end of each round, players resolve a scoring phase, based on area control of the wharves and/or progression on the council track. Additionally, a goal card awards points for the player who has the most of something (e.g. most buildings of a particular type, most sunken ships, etc.).

Play continues in this manner until the end of the third round. At that time, end-game points are calculated and the player with the most points wins!

Embarcadero is a strategic game with some cool ideas. Card-play is at the core of the experience, and with it comes a puzzle of which cards provide which resources, how those resources can be used to purchase buildings with big bonuses, etc. The economy in this game is tight, and players always want to keep extra money on hand, since purchasing cards is mandatory. If a player can’t afford to buy a card, they suffer a penalty!

Mixed with this card-play is an aspect of spatial area control. The 3D structures provide a tactical challenge; players want to position their ships and buildings to be adjacent to opponents so they can advance on the council track, while at the same time vying for majorities.

The strategy comes together nicely, but the game has a slight downside in its reliance on iconography. The cards feature lots of symbols, and while there is a handy reference guide on the back of the rulebook, new players will need to reference it frequently, which can affect the pace of the game and make it feel more complex than it actually is. Additionally, this game is better with 3 or 4 players than it is with 2. At these higher player counts, the council track and structures feel more critical, which makes the overall experience more satisfying.

Embarcadero’s production is good, and the 3D effect of building the bay is visually striking. Thankfully, the building tiles are double-thick, which helps the structures to stay put throughout the game. The rulebook is well-written and clear, and the game includes a solo mode. All told, it is a well-made product.

I enjoyed Embarcadero. If you are a fan of mid-weight euros, check this one out.

A review copy was provided by Renegade Game Studios.