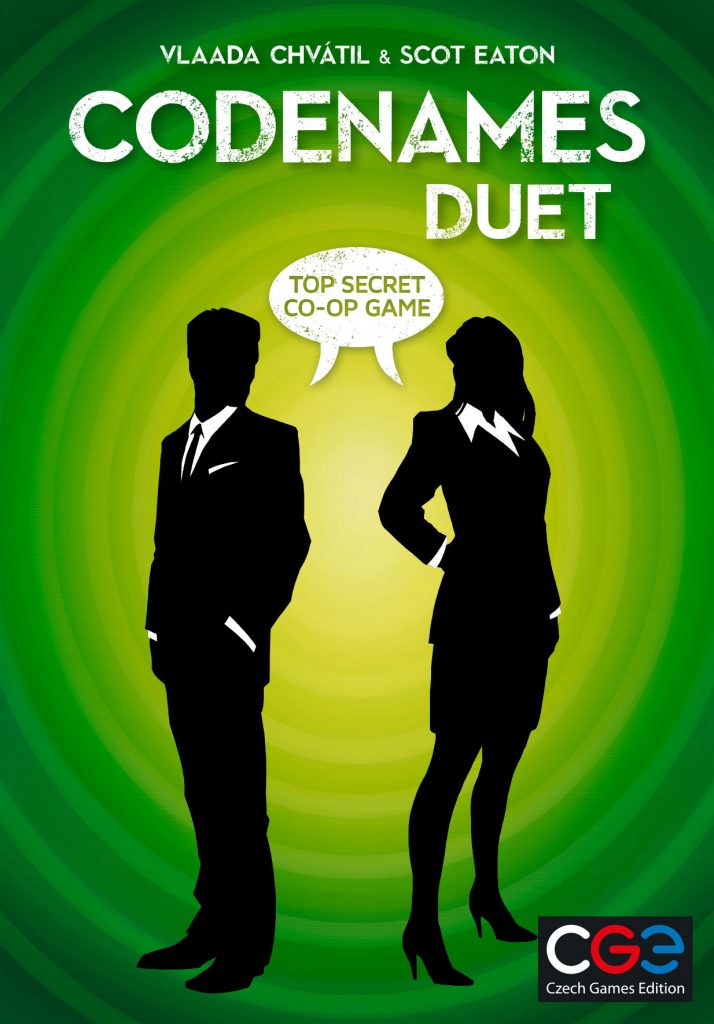 When I first moved back to my hometown county for my current job, I had a brand new review copy of Codenames ready to be played, and no one to play it with. Fortunately, I was “found” by a local gaming group just in time to get it played, and we played it over, and over, and over. I think I’ve taught Codenames to at least 70 people at this point, and I’ve only had a single person dislike it. So, I’m quite excited to check out anything Codenames, including Codenames Duet. This game is designed for exactly two players, who work cooperatively using a double-sided key card. Does it maintain the Codenames magic? Let’s find out!

It’s a game about guessing words, and not much more. While the game has “assassins,” they are simply words that make you lose if you guess them. Nothing offensive here. There is a version of Codenames called Deep Undercover with Cards Against Humanity level offensive words, but none of that is present in Duet.

Let me start by telling you the mistake I made with Codenames Duet right off the bat. At a 20-person game night, two players were looking for something to kill time until another bigger game ended, and they had both played Codenames with me several times. I put Codenames Duet in front of them and said, “Just check the differences in the rulebook, it’s not much,” and walked off. What a mistake! I hadn’t played yet, and my first few games reaffirmed that this isn’t your mother’s Codenames.

Overall, the rules changes are not many, but they are significant. First off, the game is now cooperative, but the real issue is the double-sided key card. Each player sees the clues they want their partner to get, and the opposite side of the key card looks very different. A card might be correct if you guess it, but it could be an assassin if your partner guesses it! There are actually only three overlapping correct cards out of 15, and you only have 9 turns between the two of you to get everything correct. Combine this with the fact that both sides of the key card have three assassins, and this is a much tougher game than usual. It’s a lot more to wrap your head around than I expected. For example, you have to be careful to point the neutral tokens towards the person for which the card is neutral. You can also pull off some clever logical / mathematical play in some cases. For example, in one game, I guessed all three common words early on, so whenever my partner gave a clue, I knew she was not talking about any of the words that were correct on my side. I also had an interesting game where a “problem word” (an assassin word related strongly to my correct words) was actually correct on the other side, so once I guessed it, I immediately used that now-covered word as a clue.

For Codenames fanatics, there’s an incredible amount to dig into here. On top of the game being tough in and of itself, there is also a missions sheet included that sets parameters for not only the number of turns, but the number of neutral guesses allowed (after which you are punished by losing an extra turn). In addition, this game fully integrates with previous Codenames games; you can use the new words with the normal game and vice versa, or even play Duet with the pictures from Codenames Pictures. There’s nearly endless replayability here, and more importantly, you can get it to the table. One of my friends who primarily plays 2-player games with his spouse said, “I wish they had just printed only this and not the original game.” He’s insane, but I get where he’s coming from.

The two main issues with Codenames Duet are its learning curve, and then exactly the thing it set out to explore: the two-player environment. It has an entirely different feel while playing, and that can be both good or bad, depending on your personality. When you give a pretty bad clue in regular Codenames, it can be a little embarrassing, but the crowd reaction and laughter from the other team usually allows for the party-game atmosphere to move the awkwardness off to the side. I could definitely see couples playing this, and after one player gives a bad or misunderstood clue, the other player being like “Seriously? Why would you think that is a good idea?” and even getting into an argument (perhaps I have a pessimistic opinion of other couples). Even if it’s just a subtle “Um, okay, I guess,” there’s no crowd around to defuse the tension of a bad move. That’s exacerbated by the fact that this game is hard, especially because of the three assassins on each side. You really need to be playing with two players who are equally comfortable with that. Fortunately, I’ve not had any issues myself, but in about ten games split between my wife and a gamer buddy, I’ve touched the assassin a lot and I keep waiting for that moment when someone’s like “WHY WOULD YOU THINK THAT!?” These two things are basically symptoms of the more broad issue, which is that I think this game is for two-player gamer couples, who are used to games that are tough both to play and to learn. Casual fan of Codenames may have a tougher time with this.

So, if you know what you’re getting into, and you’re a huge fan of Codenames like me, this is an automatic purchase. At minimum, it’s a bunch of new words for your normal Codenames games. At best, it’s a fantastic way to get your Codenames fix when there’s only two of you around, or to play in a new way with a big group. It’s a deeper, trickier, tougher Codenames, and those are all good things. I still prefer the party game atmosphere of regular Codenames, but I would never turn down a game of this. With the missions included as well, this game is nearly infinitely replayable, and worth far more than the $20 CGE is asking for.

Thank you to Czech Games Edition for providing a review copy of Codenames Duet.