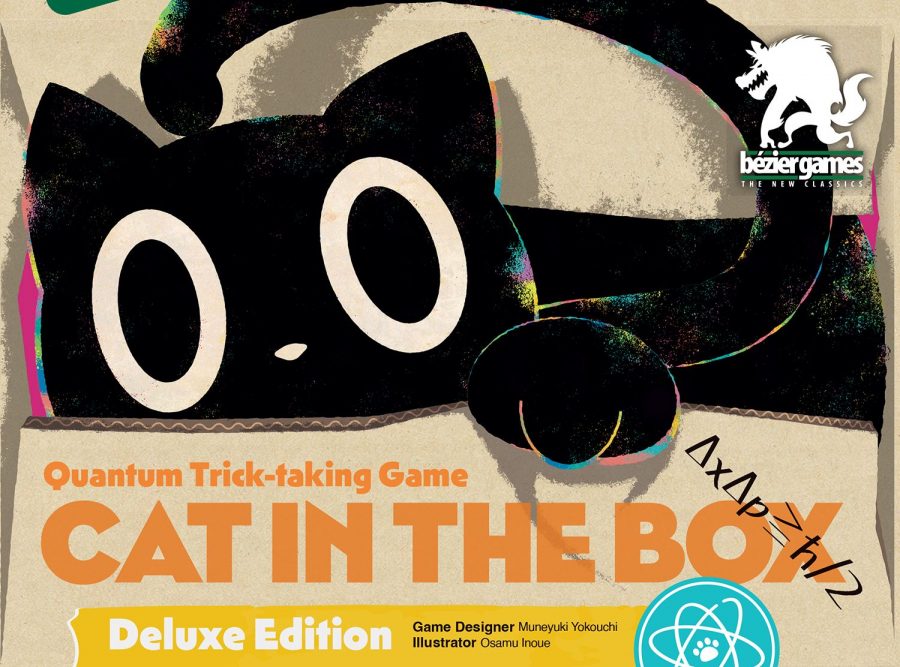 Cat in the Box is a new trick-taking game in which the cards don’t have defined suits, but players instead decide what they want their cards to be when they play them. Totally strange? Yes. Totally fun? Let’s find out.

Trick-taking games and I go way back. Some of my earliest gaming memories are of playing Euchre and Oh Hell! Later on, I fell in love with Wizard, and just a couple of years ago, The Crew blew my mind.

Enter Cat in the Box, a game in which there are no assigned suits. All the cards are printed the same color, and players declare the suits of their own cards when they play them.

The basic structure of this game is in line with other trick-taking games: each round, someone leads a card, everyone else plays a card to follow it, and the best card played takes the trick. However, since suits are undefined in this game, players are not bound to any specific set of choices—they can change their hand as desired. Here’s how it works. (And it’s a little wonky, so bear with me.)

In the central area is a board with 4 colored rows of spaces corresponding to the card values. When someone plays a card, they place a token from their personal supply onto the board in the spot they want their card to be. For example, if someone played a 6 and wanted it to be blue, they would place their token on the blue 6 space. The card itself gets placed in their personal tableau, alongside a private board, on the side of their chosen color (blue in this case).

Since a token gets added with each card, there can be no duplicate cards (i.e. if the blue 6 space has been claimed, no one else can play a blue 6, since there is already a token on that space).

But what about following suit, though?

Once a card has been led, successive players can choose to follow suit—that is, to declare their cards to be the led color—or not. If they break suit, they note it on their personal board, and for the rest of the round, they cannot make any other cards be that suit.

Trick resolution works in the typical way, with the highest card of the led suit taking the trick, unless a trump card was played. (Red is the trump suit in this game.)

As an added wrinkle, the round can end prematurely if a “paradox” occurs. A paradox happens if someone cannot legally play any card (e.g. if a player has only 3’s, can’t declare blue or yellow, and the green and red 3 spaces are already taken).

Players earn points by winning tricks, unless they caused a paradox, in which case they lose points instead. They can also earn bonus points by correctly guessing how many tricks they will win, and by connecting their tokens in a contiguous group on the board. (A player who caused a paradox is not eligible for these bonus points.)

The game lasts as many rounds as there are players. After the final round, the player with the highest score wins!

If this game sounds bizarre, that’s because it absolutely is. Cat in the Box might be the strangest game I have ever played; it’s like if Salvador Dali had designed Wizard. This game is built on a fascinating and totally original premise. Just as The Crew flipped trick-taking on its head by making it co-op, this game reinvents the genre once again with player-declared suits.

The decisions in this game are multilayered, and the strategy comes from the interlocking scoring opportunities. Players want to follow suit when possible to keep their options open, but they must balance this with the need to win their predicted number of tricks and to play cards that will allow them to make a large group of tokens, all while avoiding a paradox. For a game whose core mechanism is simple trick-taking, the strategy here is quite nuanced.

That being said, I feel like the punishment for causing a paradox is a bit too severe. Not only does a paradox prevent the triggering player from earning points, it actually subtracts points for each trick they have won. This reminds me of the scoring in Wizard—scoring which I also feel is too harsh—in which players who make their bet gain points and players who miss their bet lose points. In both games, I would have preferred if the negative result was simply no points, rather than minus points.

The production of Cat in the Box is nice, but it doesn’t feel like much of a “Deluxe Edition” to me. The player tokens are certainly attractive, but everything else is standard fare. It’s all very functional, but not overproduced or luxurious as one might expect from a deluxe version of a game.

Overall, I find Cat in the Box to be a remarkable specimen of game design. It’s bold, it’s different, and it’s fascinating. Given how wildly unusual it is, though, I recommend it primarily for folks who are well experienced in trick-taking games. Using this game to introduce trick-taking to a new player might make their head explode. However, if like me, you enjoy games like Euchre, The Crew, and Wizard, Cat in the Box might be worth trying out.

A review copy was provided by Bézier Games.

Cat in the Box is like no trick-taking game I have played before. Its scoring system feels a bit punishing, but its bizarre premise and multi-layered strategy make it worth a try.