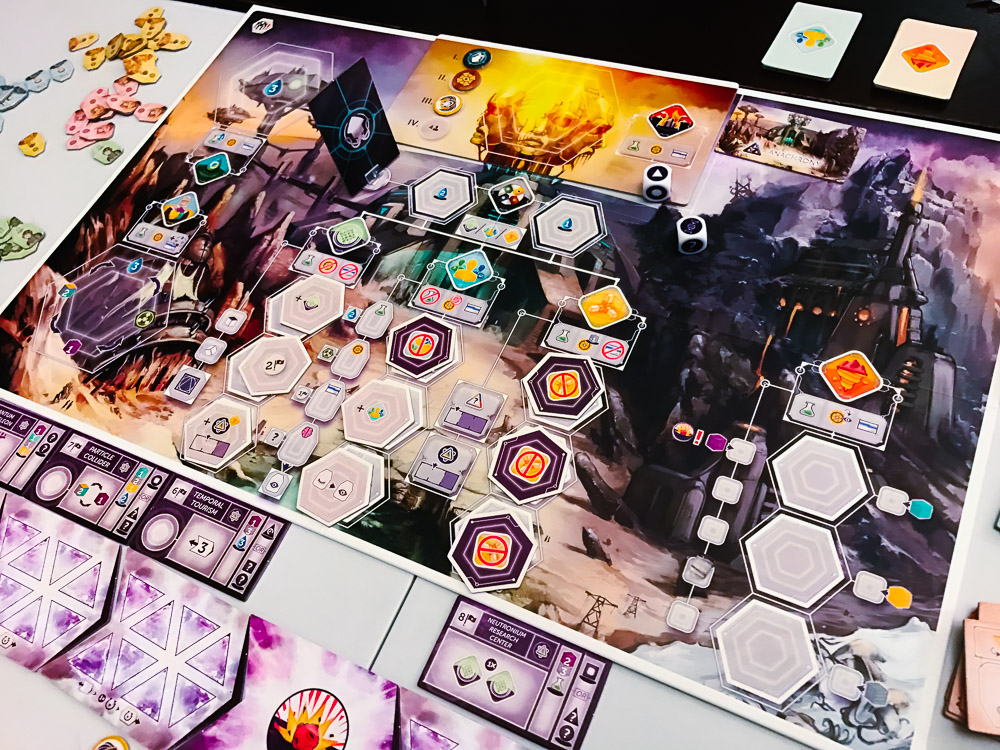 Anachrony is a time-traveling worker placement game from Mindclash Games.

Anachrony was designed by the Mindclash design team of Richard Amann, Viktor Peter, and David Turczi. Amann and Peter both own Mindclash Games, and also worked together on Trickerion: Masters of Illusion, and are currently at work on Cerebria: The Inside World, and Transhumanity. Turczi has designed [redacted], [microfilms], and Days of Ire: Budapest 1956.

Soon the cataclysm will destroy all remaining life.

Lo, a cataclysm will soon befall the remains of civilization, namely: an asteroid of neutronium will soon devastate the remnants of our people.

This post-apocalyptic world was ravaged on the Day of Purgation. Explosions and fissures ruined the Earth, and it wasn’t until 20 years later that mankind could emerge under light of the sun to find food and supplies. Long story short, humanity established a world council, discovered a time-altering element called neutronium, and presently must use the warning from the future to prepare and evacuate their people from Earth.

In Anachrony, 1-4 players take control of one of four people groups, called paths, each with specific goals and ideals. You can visit Anachrony’s website to get a fleshed out backstory of the cataclysmic timeline. In essence, the player with the most victory points will unite the people and lead the future world council into a beautiful new era of human flourishing.

The massive Anachrony game box is packed full of beautiful components, eye-catching artwork, and tons of thematic decisions to make. The meat of Anachrony lies in wisely dispersing a pool of specialized workers amongst exosuits. Exosuit tokens holding various workers are placed onto action spaces, dotting the maddened landscape of the chaotic future. Players are given oversized boards with locations for up to 12 structures, free action spaces, and well-designed spaces for exosuits, depicting both costs and potential bonuses. Iconography is smattered all over the many tableaus of Anachrony, reminding players the effects of their decisions.

At first glance of the game board and rulebook, one might grow exhausted and decide to turn in for the evening instead of learning to love the options and printed symbols. Anachrony, while beautiful, requires initial dedication from its players. Fortunately, it’s the sort of game that provides heaps of room for variability and strategy without meaninglessly complicating the game. One might not know the end-game effects of the actions, but halfway through the first game, new players begin to understand the flow of Anachrony. Learning is most of the battle.

This is my messy, messy player board.

Each round is split into six phases:

Some phases of the game can involve too much micromanaging, including: finding and picking up your workers and exosuits, resupplying new resources and workers, moving chits along the timeline, resolving paradoxes, etc.

Despite tedious tasks players need to remember each round, Anachrony remains one of the most dynamic games I’ve ever played. Not only can action spaces vary in cost to enable, but at game start, players have two sides for each player board and can choose between two leaders. These options provide many routes to victory, and change the entire scope and experience during each game of Anachrony.

On a player’s turn, he has a multitude of options available. Most early phases revolve around planning and determining which actions are essential for a player’s strategy. Tactical decision making comes in the form of deciding how many exosuits to power, how many resources to warp in, things like that. Many action spaces on the main board not only give actions, but give preference to specific worker types, granting extra bonuses, or less payment to activate actions.

The main board gives players tons of options to achieve victory.

The action rounds phase allows to players to:

Anachrony throws a unique twist onto worker placement, where three regular workers specialize on various board spaces. One worker type is a genius—acting as a wild—making board positioning easier. Spent workers become tired and will be unusable in the following round. This is remedied by providing water to restore workers, but players can opt to force workers to return, making them angry and dropping the morale.

Scientists, administrators, engineers, and geniuses. Each provides specialty bonuses for various actions throughout the game

After a point in the timeline has been reached, the calamity takes place. Action spaces are suddenly replaced by new tiles. Each of the tiles offer extra bonuses, but once the space is used, it’s unusable until the game ends. This part of the game is critical. Unprepared players will be unable to power exosuits (of which players only have a single free exosuit at this point) and prepared players will trample over the weak. This means experienced Anachrony players will rise to the top, taking advantage of high-opportunity action spaces, and begin a slow steamroll of their opponents.

Anachrony rewards players who plan wisely for their end-game strategies. Players who can also sidestep roadblocks from their opponents and tactically adjust their action preferences will come out on top.

One opponent might take the gold resource a player needed to continue his resource production engine, so a wise player might look to trade water for a gold to make up for the loss. Instead of relying on the resource mining action, a player might have chose a leader who allows free pick of remaining resources at the end of each round. Anachrony provides a myriad of options for developing a plan for victory.

Buildings are critical to success, and the most fun to engage with.

Players will receive substantial points for allocating the correct resources to evacuate with. This is one way for a player to influence his strategy and engine-building throughout the game. Players can also construct power buildings which allow time travel. This allows a player the ability to return to old eras and spend resources he asked for earlier in the game. This not only removes paradox issues, but grants end game points. Though factions and leaders can shoehorn players to an extent, each game offers many unique approaches. One game a player might focus on assembling superprojects and buildings, when in another game a player might purposefully take anomalies, as certain buildings and abilities make them worth points.

Engine-building in Anachrony is a pleasure. Players learn to seamlessly integrate various buildings. Some buildings grant extra resources, while others grant free water each round. Superprojects occasionally grant new abilities, but take up two spaces in a building slot. Working out available buildings and constructing them with just the right amount of resources brings feelings of satisfaction.

Anachrony ships with a multitude of ways to vary setup and gameplay. Aside from leaders and factions, players can draft starting resources cards and end-game condition cards. Players can also opt for special timeline tiles which do a variety of things such as gain an extra victory point, take two of the warp tile resource, lose/gain a morale point, etc.

This is part of the Doomsday Module.

The Doomsday Module introduces experiments and variable game length. Two of the four factions aim to end the game sooner, while the other two factions look to extend the game, perhaps even ending the threat of the oncoming cataclysm. By completing experiments, players take extra victory points and roll dice to help determine where the flow of time moves.

The Chronobots are an AI-controlled faction for solo games. Solo games mostly follow suit with the base game, but players will need to take time to learn the Chronobot’s turn flow. It’s mostly simplified, but the rules are a tad confusing. Chronobots follow a tree of actions and activate various chits depending on the roll of the die. Chronobots score differently, but seem to efficiently pick up buildings and workers as they see fit. It’s a challenging game and can be modified to a player’s chosen difficulty level.

Returning to a previous review point: Anachrony has a lot of concepts in a big box.

Learning Anachrony is a challenge. Sure, one might grasp basic worker placement understanding, but teaching the differences in workers and why players should prioritize different actions over others is a task. The initial rules explanation is bound to bring a lot of questions. Whoever is teaching the game should probably play through the entire first round as a walkthrough, helping everyone else with activating exosuits, and showing them which action spaces should be top priority. Luckily, once players get over the hump, Anachrony becomes so easy to proceed alongside.

Here are a few leaders, starting resources, and various other tokens.

The rulebook is well laid out. Since new buildings arrive each round, the rules teacher will likely need to refer to the back few pages of the rulebook to constantly remind players what the new buildings do. It’s not a horrible thing, but it will take a few games before players learn the iconography well enough. Once understood, it should be relatively easy to figure out.

While I love the components and bits in the box, there is no sense of organization. It’s a huge box with a lot of stuff inside. It almost needs an insert—baggies and plastic containers barely cut it. Players have to handle so many different buildings and tiles and resources and boards. Because of these things, the game is a mess to get out and a mess to put away.

Anachrony is a beautiful game with many branches of decisions to make. Each game is unique and overall, Anachrony boosts the scope of complexity in worker placement titles. If you’re looking for a complex euro with tons of replayability, Anachrony is for you.

A review copy of Anachrony was provided by Mindclash Games.