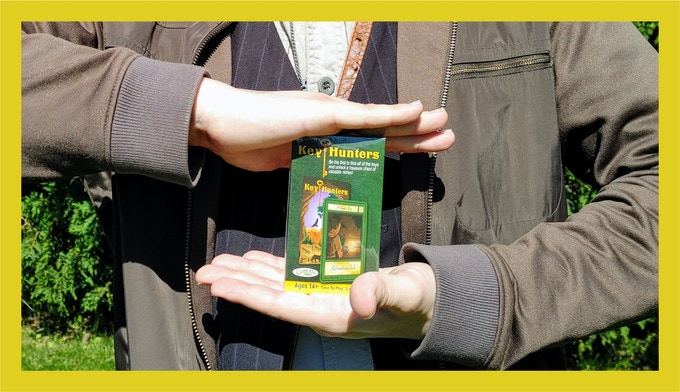 Key Hunters is a short, family-friendly card game where players take on the roles of adventurers jostling to obtain the treasure via eliminating the locks on the treasure chest.

In Key Hunters, players play cards from their hands to manipulate the locks on the treasure chest. The player who reduces the lock to 0 on her turn wins the game!

To play, players will place a 10-sided dice with the 10 face-up on the treasure cards, and everyone will draw 2 cards. On a player’s turn, she will draw a card and then play a card. As players play unlock cards, the dice will get rotated to represent the appropriate number of locks remaining on the treasure chest.

The cards in players’ hands do things like reduce the lock by 1, 2, or 3, skip other players’ turns, add locks to the treasure chest, and some even allow you to roll the dice lock, randomizing the number.

The turn order of draw a card, play a card will feel familiar to just about anyone who’s ever played a card game before, so Key Hunters is an ideal family filler game as far as teachability goes. It also has the excitement of watching the lock dice slowly tick down, all while not knowing what cards are in other players’ hands. There are predictable bits of strategy, such as saving the better unlock cards for the endgame, but there’s also some less predictable bits of strategy, such as when to re-roll the lock dice or when to skip other players.

The artwork is simplicist, and I like it a lot. It reminds me of the sort of art you find at the beginning of middle school chapter books, which gives it a nostalgic feel. There’s also some fun drops of humor in the artwork. The rest of the components are solid, and the cards and dice all fit in a nice, compact cardbox.

Key Hunters feels a bit like Love Letter and hot potato, only you want the potato to explode in your lap. This game isn’t going to blow you away with crazy new mechanics or an immersive theme, but it’s an exciting filler game with enough nuanced cardplay and guess-work to keep things interesting. And it really does play in 5-10 minutes, even with new players. It’s also very teachable: as long as they can read, I don’t see any reason why a small child couldn’t enjoy playing this one. Give it a look if it sounds like something you and yours would enjoy!

You can check Key Hunters on Kickstarter here.

A preview copy was kindly provided by Large Key Games.

A great family card game that's fun to play and easy to teach.