Review: Zona: The Secret of Chernobyl 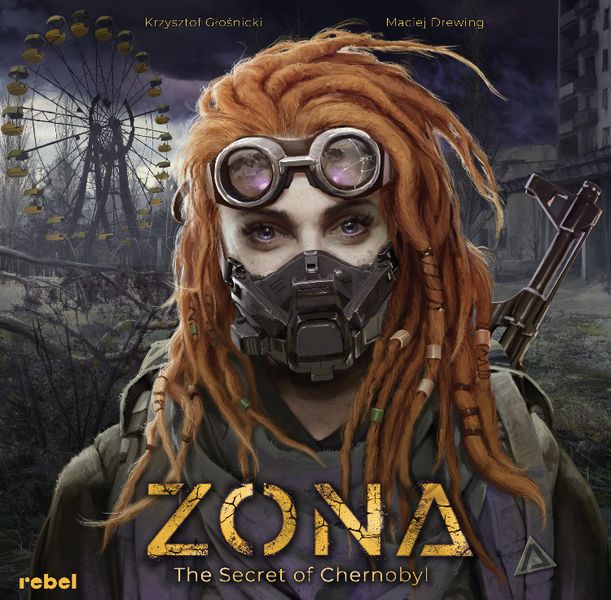 Zona: The Secret of Chernobyl sends 1-4 players out into the irradiated wasteland zone or “Zona” to uncover secrets and ultimately, find the hidden knowledge stored in the mysterious Sarcophagus, where the dangerous emissions are emanating from.  Players will face anomalies, mutated monsters, and other scavengers who will all present threats and opportunities. In the end, only one player will escape with the secrets of the Zona: do you have what it takes?

Players will use weapons to fight off entities including monsters, animals, and other scavengers. You can’t directly attack other players but when you are the first player, you can drop enemies directly on their current location, forcing a confrontation. During play it is possible to take mental, physical, and radiation damage until your character is weakened or dies. Some of the enemies are gruesome mutants, depicted on their tiles.

Players can gain or lose “Reputation” based on heroic or selfish actions; there is no bonus for having a bad reputation but there are significant bonuses at different locales for having a good rep.

Players can consume items to regain health including energy drinks, cigarettes, alcohol, and med packs. Many are one-time use items.

Zona: The Secret of Chernobyl will feel familiar to anyone who has played Fallout, STALKER, or the Metro series of video games. Set in radioactive Russia, this alternate-history adventure game sees players taking on the mysteries of the Zona about 31 years after the real-world Chernobyl incident. Players will take two actions, interact with an event deck based on their location, and then suffer the effects of the Rumor deck together. If you’ve played a Fantasy Flight game set in the Cthulhu universe in the past 15 years, you’ll instantly be familiar with this formula.

The Action phase lets players move, take a local action, open a secret location, encounter a threat, rest, pass, or camp. Camping can only happen at specific locations, but gives you more options than just resting. The Event cards are fairly straightforward – draw a green one if you’re in a green zone, or a yellow one if you’re in a yellow zone. (More on this later.)

The Rumor phase is where either something bad happens to everyone, or the first player gets to decide who the Rumor happens to by passing out enemies or other obstacles to other players. The Rumor deck also advances the Emission track, which triggers several things once it reaches the bottom of the track. First, anyone not in a bunker receives damage equal to the color of the zone they are in, then all the enemies and anomalies on the board are refreshed, along with the marketplace.

Something I wasn’t clear on is whether the Emission track then resets, or if it just stays at the bottom for the remainder of the game. After reading the rules several times over, it doesn’t say. I have to assume then that it does, which would then mean after 3-4 turns the Emission track will be permanently at the bottom for the rest of the game, which means almost every turn after that an Emission will happen and anyone not in a bunker will take 4+ damage. Each character only has six health – sorry, Fortitude – not to be confused with the Fatigue meter. Where Fortitude measures health, you can re-do a test by advancing your Fatigue meter by one. However, once it reaches the maximum of five, any more Fatigue received will result in loss of Fortitude. Lose all six Fortitude and you receive a weakness (minus one to a base stat). Get three weaknesses and you die. Got all that Jim?

So you move through the Zona, gathering better items and weapons and trying to get two secrets from the four secret locations on the board. These locations have harder tests that involve 2-3 chained obstacles, and once you complete them you get to draw a card from that locale’s secret item deck. These are where players will find the best gear. When you’re not at a secret location, you’ll get an event card from the green deck if you’re in a green

zone, and the yellow deck for the yellow zone. I am still not sure what to do if you’re in a red zone or at the Sarcophagus. The rules literally say, “Neither the red sector or the bunkers have assigned event cards.” It doesn’t say what to do, however, so I just assumed that you still needed to draw a yellow event card and resolve the “Other Location”.

There is a decent action and exploration game in Zona, but if you couldn’t already tell, it has a lot of problems. Many could have been prevented by one more edit of the rules, and the inclusion of a glossary or quick-reference. There is a wonderful player-aid card that sums up a round and what the symbols mean, but the 25-page rule book really needed either a better “Contents” section or an index in the back to help cut down on how long it took to find a rule or explanation.

My solo play was close to the 120 minute mark, but much like American football, only a fraction of that was actual game play. Most of it was setup, reading, re-reading, and head-scratching. I quite enjoy the Fallout and Metro video game series, so I was keen on taking a look at Zona. Sadly it’s not on par. Speaking of not on par, the art is all over the map. The rule book art and the player characters and minis are great – in fact, the minis look amazing, are easily identified, and would look great in the hands of a painter – but some of the monsters and items look rather rushed.

If you’re looking for something in the vein of radioactive, post-apocalyptic video games in tabletop form, Zona will make you feel right at home. There are some things I enjoyed, such as the dark and humorous endings (see below) and how everyone uses the three dice for every test. But much like a cobbled-together Kalashnikov, it’s not quite in full working order. Check it out if you’re interested, just keep in mind it’s missing a level of polish that you really need in this kind of game.