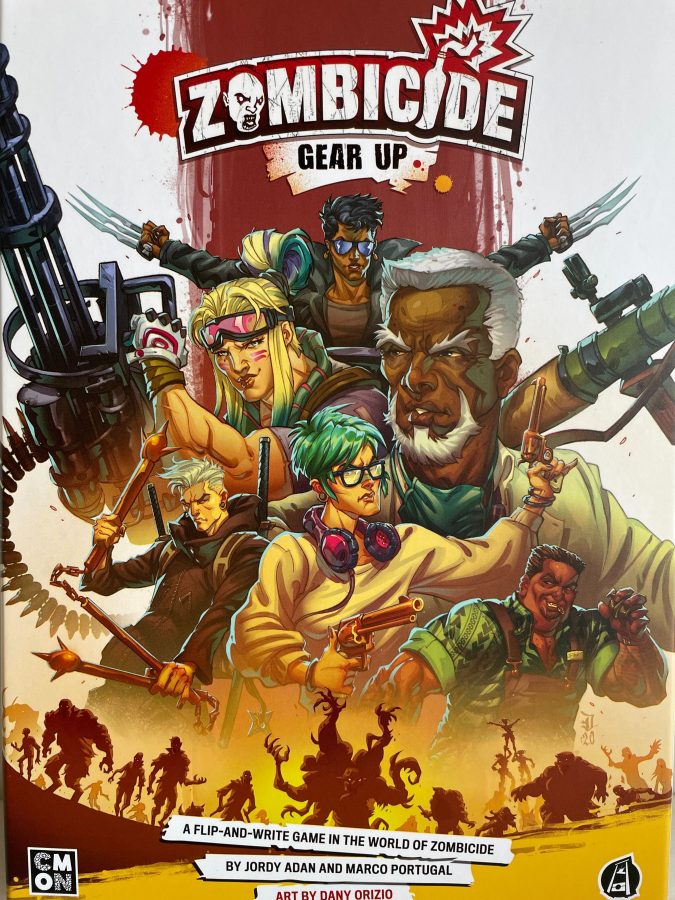 Zombicide: Gear Up pits 1-6 survivors against waves of undead foes, just like the original Zombicide. But in this version, players will be flipping over cards to decide what weapons they get to use that round and filling in tetromino shapes to try and defeat the zombies. So is it a Flip-n-Write game that’s a zombie-slaying good time, or should you stick to the original with minis? Read on for the review!

Zombicide will always get a hard “R” rating based on blood and gore alone. Every zombie you face is bloody, missing body parts, showing their insides, and/or baring blood-stained teeth at you. Also in this version about half of the female undead were wearing skin-tight clothes that accentuated certain body parts. I’ll leave a picture below and let you draw the conclusions.

Zombicide: Gear Up (Z:GU hereafter) starts with each player receiving the same number of enemies to their 3rd street slot based on the leader card. For the first of the 2 rounds, players set up 9 turn cards, with 7 spawn cards lined up under all but the first 2 turn cards. This, plus the fact that the boss doesn’t appear until the 2nd round, helps it feel like the game is ramping up in difficulty as you go. And it is a difficult game; in my first 3 games on Easy I lost 2 of the 3 times. Each turn during the 2 rounds plays out like this: Reveal, Attack, Upgrade, Zombie Walk, and Spawn/Boss.

Reveal has you flip over the next Turn card, which shows you what weapon you get to use and what Zombies will be moving or attacking later. Attack lets you use your weapons of the revealed color and spend any ammo to fill in single hit boxes. Upgrade lets you spend 1 upgrade point per Zombie killed in front of you this turn—this is difficult to juggle because several of the upgrades require 2 points each, so you have to time your attacks. Zombie Walk has each of the Zombies whose speed matches the revealed speed move up one Street Slot, and any of them in the 1st Street Slot attack for damage equal to their remaining red attack icons. Spawn/Boss has the players reveal the next Spawn or Boss card. When spawning enemies this way, players collectively decide where the new enemies go and distribute them as they see fit.  Also, depending on what card was revealed, players may face standard (black name border), special Zombies (red border), or a Boss attack if it’s the 2nd round.

After the 1st round, players will trade out the Spawn cards for 7 Boss Cards, and the Boss is now available for players to attack. And make no mistake, you’ll want to attack them as soon as possible. A Zombie in your 1st Street Slot is annoying, but if you focus too much on them the Boss will absolutely decimate your team’s health in 1-2 turns. In fact, the only way you’ll stand a chance is with most of the upgrades unlocked, a healthy supply of armor and ammo, and a little bit of luck. Players can gain ammo and armor when they cover their corresponding spots on a given enemy. The game also ramps up accordingly as you add players or if you’re masochistic and want to bump up the difficulty. I did manage to eke out a win with 3 players on Standard difficulty, but I can’t imagine winning on Hard or Nightmare.

So why would you like Z:GU? It does a good job of cutting the game down to the basics of fighting Zombies, managing upgrades, and juggling the desire to take them all down and being more strategic about it. Instead of managing someone’s threat level you’re just managing who’s getting what Zombie put in front of them and trying to balance who can take new enemies on and who needs a couple more kills to unlock a much-needed upgrade. The downside is you don’t get any of the miniatures that CMON is known for, but that also helps keep the price down on this smaller game. I also like that they included the option to play as a solo survivor, but the companion cards aren’t as helpful as another full survivor.

Z:GU is rare both in that it’s cooperative and because of how hard it is to pull off a win (in my experience Flip & Write games are usually lighter fare). I’ve played different versions of Zombicide multiple times, and never had as much trouble winning as I had in this version. You really need almost all your upgrades and the right combo of survivors playing smart and communicating well in order to succeed. If that sounds like the perfect game for you, then look no further. Personally, I was a little disappointed at the difficulty, and how bare-bones it is compared to a full Zombicide game.

Plays like a harder, R-Rated version of popular Flip & Write games like Silver & Gold. That's a critique or a boon depending on your point of view.