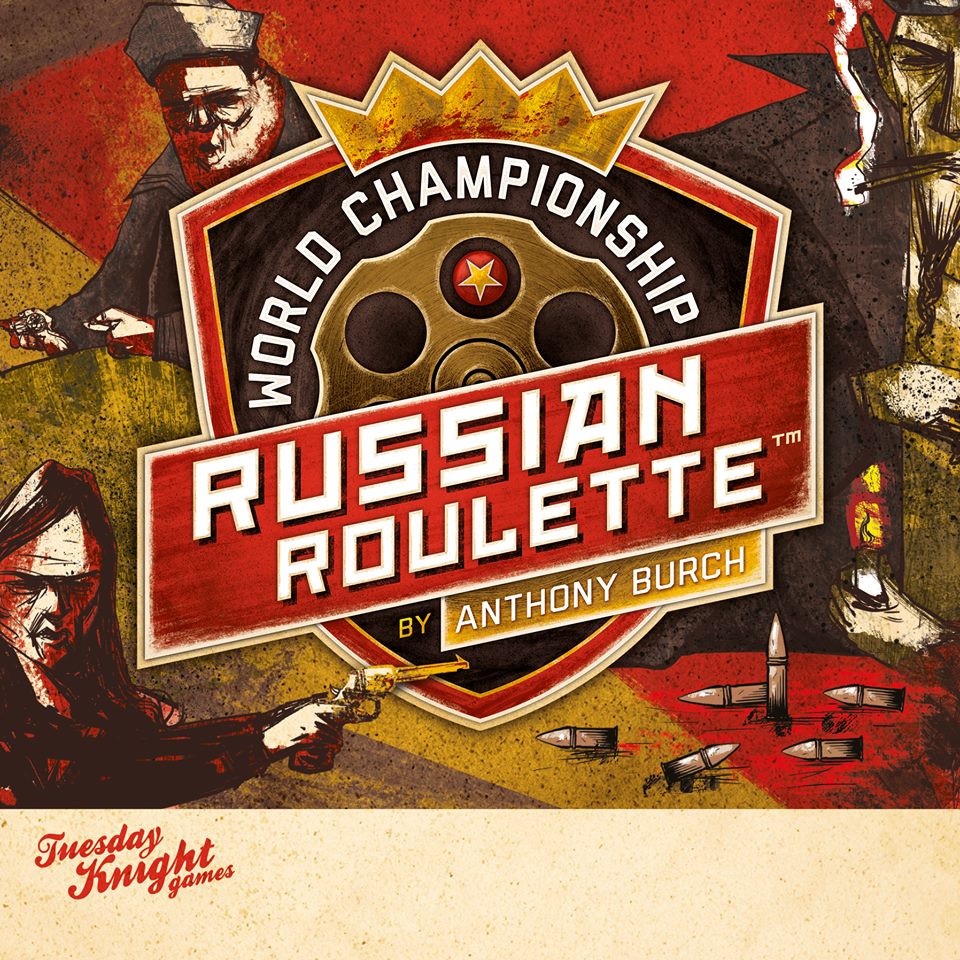 It goes without saying that a game called World Championship Russian Roulette has a dark theme. There is nothing overly graphic in the game, but there is no escaping the fact that it involves themes of suicide. In the game, players are instructed to make a “finger gun” and physically put it against their head, which may disturb some folks. It should also be noted that the rules contain minor profanity, and some action cards have suggestive titles.

Like Tuesday Knight Games’ other release, Two Rooms and a Boom, this game is handled in a very silly, self-aware manner but it definitely won’t be for everyone.

Tuesday Knight Games is developing a reputation for delightfully faux-macabre, tongue-in-cheek games that involve people dying gruesomely. I absolutely loved their first offering, Two Rooms and a Boom, and I was anxious to try the equally dark-yet-humorous World Championship Russian Roulette.

The very concept of this game is twistedly funny, and the more you think about it, the more amusing/awful it gets. In WCRR, players each control a team of four contestants in the (presumably messy) affair that is Russian roulette. The goal of the game is either to be the first player to fifteen points or the last player with team members alive.

WCRR is very easy to learn and play. The game does not have traditional turns, but instead, all players play simultaneously. Everyone begins the game with a hand of seven cards: six “Clicks” and one “Bang.” Each round, all players secretly remove one card from their hand, placing it face-down in front of them. From the remaining six cards in their hand, they will select between zero and five cards to draw (thematically, how many times they want to pull the trigger). The more cards they draw, the more points they receive. However, if a “Bang” card is ever drawn… well, you can imagine what happens to that character.

But wait, you say. If everyone gets to remove a card from their hand, thus guaranteeing it won’t be drawn, wouldn’t everyone just remove their “Bang” cards and be safe?

Perhaps. Players are absolutely allowed to remove their “Bang” cards, but, per regulation Russian Roulette rules (alliteration FTW), doing so constitutes cheating. If a player suspects an opponent of cheating, she may formally accuse him. The accused player must reveal his face-down card, and one of two things will happen:

Each player may only make one accusation per round, and these happen after players have selected how many cards (trigger pulls) they’ll draw. This is important, because it makes the metagame work. If someone is planning to make five trigger pulls, she probably looks suspiciously confident that she’ll survive. (Or she is risking the contents of her skull on a crazy double-bluff.) Likewise, if a player only wants to draw one or two cards, this might be a sign that she is playing fair, or at least she wants to make it look that way.

Once all accusations have been made, players flip over the number of cards they selected. If anyone flips a “Bang” card, that player loses a character and does not score for the round. Everyone who survives scores points equal to the number of cards she drew, plus one point for simply staying alive.

As the game goes on, players will acquire action cards, which help keep the game interesting. They allow players to do all kinds of helpful things, such as peek at the top cards of their own pile, force an opponent to draw one extra card, or even aim their gun at someone else, potentially shooting them instead. All this makes for a very silly, “take-that” experience.

WCRR does have a few issues, though, primarily with the rules. As an example, it is unclear what happens to players’ removed cards at the end of a round. A quick look on BGG told me that the cards are just returned to players’ hands, but this should be explicitly stated in the rules. Moreover, while the action cards are pretty straightforward, we had a question about one of them that the rules didn’t answer. Also, as noted in the content guide, the rules do contain some minor language.

Despite these minor issues, though, WCRR is a blast to play (get it?). My whole game group enjoyed it, even those who don’t typically like this style of game. It combines the thematic flavor of Cash ‘n’ Guns with the dubious psychological metagame of Sheriff of Nottingham. The components look great, from the cool custom dice to the stylized illustrations to the bullet tokens with an attractive laminate finish. The action cards give the game a level of light strategy, and it’s just really, really fun. Tuesday Knight Games is on a roll. I have thoroughly enjoyed both of their major releases, and I can’t wait to see what they make next!

A review copy was provided by Tuesday Knight Games.