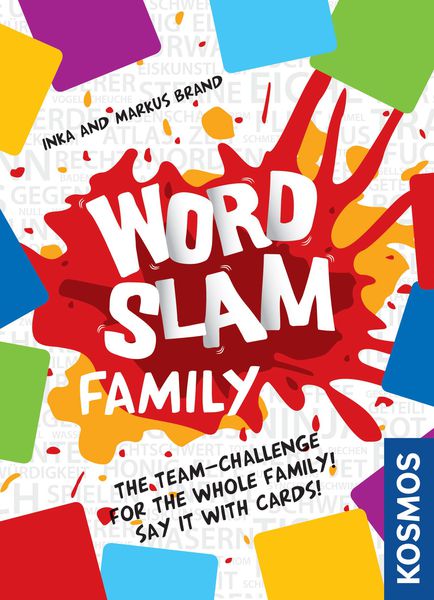 Word Slam Family is a new game from KOSMOS, based on their popular Word Slam. In this party game, two teams of players compete to guess a secret word first, using only one-word clues found in a deck of cards. It is incredibly simple to learn, and thus great for anyone.

Word Slam Family is a high-energy, team-based game, in the same vein as Taboo/CatchPhrase. The “get your teammates to guess a word” thing has been done to death, but the fantastic design duo of Inka and Markus Brand have given it a fresh look.

Word Slam Family is playable by itself or in conjunction with the original Word Slam, which we have reviewed in the past. To begin, players divide into two teams—for logistical reasons, teams should sit on opposite sides of the table. The two halves of the game box are placed in the middle to form a divider. This is important, because players will want to make sure the opposing team does not accidentally see their clue cards.

The game comes with seven categories of answer cards, including:

Below are some example words:

To set up the game, players make a deck of these answer cards, the size of which depends upon the number of players and the desired game length. Players can customize the categories to their liking, or just shuffle all the cards together for a lexical free-for-all. One answer card should be set aside, for use in the final turn.

At the start of every round, one player from each team is designated as the storyteller (basically, the clue-giver). Together, these two players draw and secretly look at a card from the answer deck. Answer cards always have six words on them, and the number on the back of the next card in the pile (now, the card on top) determines which of the six words they will use for that round. For example:

Since the back of the next card bears a “3,” the secret word will be “Dwarf.” (This is also why an answer card is set aside at the beginning; the number on its back determines what word will be used in the last round, once the deck has been exhausted.)

Each team has over a hundred word cards distributed into decks of nouns, verbs, adjectives, and prepositions/miscellaneous. The storytellers will use these words as clues in a attempt to get their team to guess the answer before the other team.

When both storytellers are ready, they begin quickly rifling through their decks to find related words. To give a clue, the storyteller simply sets a card on the table behind the game box divider for her teammates to see; there is no limit to the number of word cards that can be used. To illustrate how this might look, here are some clues that might be used for the word “Dwarf:”

As the storytellers frantically look for useful words, their teammates can throw out guesses. When a player guesses the answer correctly, the round ends, and his team receives one point. When all cards in the answer deck have been used, the game ends, and the team with the most points wins.

As a side note, an interesting nuance to this game is that both teams can hear what the other is saying. If one team is shouting out,

…that, in and of itself, might be a useful clue. Players won’t know what cards their opponents are looking at, but they may be able to infer themes merely from listening to their guesses.

Word Slam Family is a nice miniaturization of the original. While it lacks the tactile “chrome” of the base game’s number die and card racks, its small footprint means it travels well and takes up little shelf space. It’s just a tradeoff.

Happily, Word Slam Family maintains all the frenzied fun of its big brother. What makes the original so great is its competitive, real-time pressure, which is directly at odds with the desire to give thoughtful, helpful clues. The same is true for this smaller version. Word Slam Family will incite all the same laughter as the original, and its lower price point makes it a good choice for folks who want to “try before they buy” the full game.

Though I have played the original Word Slam before, I don’t own it, and therefore, I have not been able to combine the two sets together. (Hopefully, I can get the base game soon, so I can try it out!) That said, though, they should integrate seamlessly, since they both use the same core game system.

I have had great success with both versions of Word Slam. Gamers and non-gamers alike have had a blast playing them. If I had to recommend one or the other, I would probably start with the original game, simply because the included card racks make gameplay a bit easier. However, Family‘s portability is nice, so either way, you can’t go wrong.

Don’t be fooled by the look of the box—this is a fantastic party game. I highly recommend it.