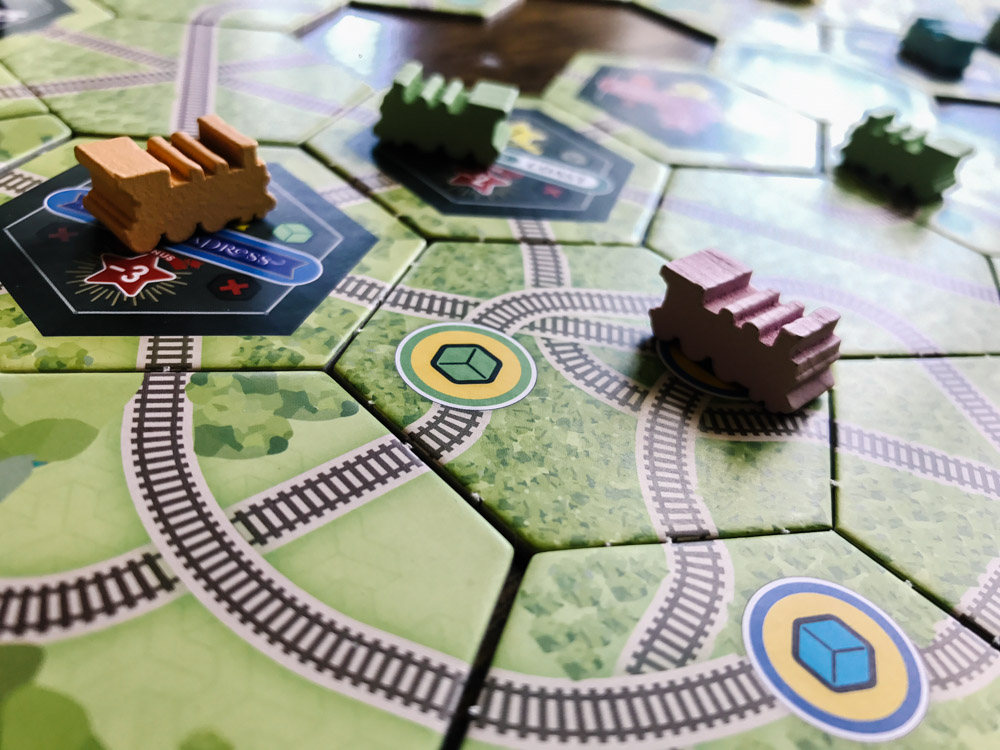 Whistle Stop is a 2-5 player, somewhat introductory train and stock game, from designer Scott Caputo and Bezier Games. Caputo has a number of published titles, including Voluspa, Kachina, and now Whistle Stop. Whistle Stop was available for demo at Origins 2017, and for purchase at GenCon 2017.

Heavier games are not necessarily better games, but they typically provide more player agency. These games can force those around the table to critically resolve issues the game presents in a more comprehensive fashion, usually with more factors and unknowns to keep in mind. To do this successfully becomes quite rewarding.

Here is a player’s tableau.

Lately, I’ve been playing a lot of games that are not only mechanically-deep and fun to play, but also bridge the gap between lighter and heavier games. A few that come to mind are Farlight or Star Cartel, but these games are not complicated for sake of complexity. What brings joy in these specific titles is how each focuses on introducing players to a troublesome mechanism or concept that’s difficult to explain with words, but easier to grasp through gameplay. Star Cartel teaches players how to anticipate the rise and fall of stocks, coupled with supply and demand. Many bidding and auction titles punish players for misunderstanding the value of tiles or resources, but Farlight makes this concept accessible and rewarding.

Stocks might be critical to your end game strategy.

In Whistle Stop, players vie for dominance in the railroad industry while trailblazing toward the west coast. Players will lay track, move trains, purchase stock, pick-up-and-deliver resources, allocate actions, and utilize powerful upgrades. Once a game-ending condition is met, players tally their control over railing companies and receive victory points from their various avenues. The player with the most victory points wins.

Each round, players receive coal to power their trains. This coal comes off a community time tracker that both ticks down the rounds to the end of a game and gives players coal or whistle tokens. Players must spend 1-4 of their coal or whistle tokens to take actions along the board. Coal allows players to move one space up or down, but usually westward. A whistle token allows for 1-2 spaces of movement in any direction. Whistles are rare, while coal is common. Players can also use coal to power upgrades or trade.

By placing track tiles, players define the shapes and paths of each game. Tiles not only provide stops that grant a resource cube, but can also make opportunities to trade resources, purchase stocks in a rail company, or turn in resources for big points. In fact, once a player reaches the west coast, they typically turn in the depicted resources, get big points, and place their train on a location of their choice to pick up extra coal, whistle tokens, or resources. There is indeed benefit to trekking across the country as fast as possible.

Players make their way to the west coast for big points.

Whistle Stop allows players to create many avenues to victory. Some players might focus on long journeys across the country to turn in cubes for points. Other players can opt to take majority control of one of the six rail companies, granting 15 points at the end of the game for each controlled company. This leads to players racing for early control of companies, as a tie means players the early adopter wins the points. Players not only need to turn in specific resources for each stock, but because a train can’t pass one already on the track, must position themselves wisely to either block off opponents or be ready to take the stock when their resources are right.

Much of Whistle Stop relies on players to decide which parts of the map they will move to or create, and plan their resources accordingly. What makes the game good is in each player’s pacing. Common thoughts around the table are likely musings like, “I can get to this space now, but if I wait a turn, I can grab the resources for the stock before the green player can. If I wait one more turn, I think the blue player will move and block me off for another turn. Maybe I should pay for this upgrade first because I can increase my coal production. I can only do two actions this turn anyway.” Managing these scenarios consistently well is the key to victory. Players that seemed too distant to be an issue might be able to lay enough track to hop in front of you and take a higher valued stock in the blink of an eye. Learning to pace yourself and become vigilant to opponent’s strategies is critical. It’s one of the highlights of Whistle Stop. Creating big combos and turning in resources for points is charming and lots of fun.

Coal is key to actions and having options.

If you read my reviews, you’ll know I don’t care for ‘take that’ in games, because it’s usually far too direct and much too lazy to feel warranted. Getting in the way of other players in Whistle Stop is indirect enough, but plays into a wise design direction for hurting others at the table. It’s just sharp enough to work, like in Ticket to Ride or something. Upgrades allow for a multitude of powerful abilities, and must be paid for to attach to your tableau. These can increase production of resources, or sometimes allow for a small victory points engine. While these will never completely turn the tide, they can make a sizable difference in one’s strategy. These can actually be bought off of other players, to the point where sometimes a player might buy (read: steal) an upgrade off another player, only to have it bought back on the next turn. It’s not extremely vicious, but is interesting because I haven’t seen something like this in a game before.

One strange strategy involves a player’s ability to move up and down a track. A train cannot end up on the same space it started on, but a train can start a turn on a stock tile, then successfully move onto a resource and wait a round. The next round, the controlling train’s player could move that train back onto the stock tile, and use other trains to pick up needed resources. While it’s easier to explain visually, this results in a player spending entire rounds moving his trains up and down on repeat, making for extremely efficient stock-churning machines. Wondering if this was a legit strategy, I found a Board Game Geek post where Richard Ham from Rahdo Runs Through made a similar observation, only to have this strategy confirmed for legitimacy by the designer. It feels a bit cheap, but the downside for those employing this play is they’ll need to move on to a new set of stocks eventually. In this time, players might be chugging along to the west coast. There are ways to combat this from happening, and I’m not convinced it’s a broken strategy yet.

Above are special tiles for trade and purchasing stocks. Below are regular tiles.

Whistle Stop is fascinating to watch come together. Players lay bright tiles with cutesy tracks creating Tsuro-like designs all around the puzzle piece board. Pastel trains glide along the track, stopping from time to time, only to pick up vibrant cubes to turn in for thick and long stock tiles. Thick border and stroked coal tokens pile on the side of the board and fill spaces on personal tableaus. The game was graphically designed for simplicity and ease of understanding and it shows.

For me, the biggest downside of Whistle Stop is setting up and tearing down. There are 78 track tiles, 60 resource tokens, 25 trains, 30 rail company shares, 100 coal tokens, and more. Each game has variable setup, which makes Whistle Stop almost infinitely replayable, but makes for quite the hassle when starting a game. Players have to shuffle tiles together, reveal specific ones, then make a huge draw pile. I suppose with a large enough table, it might be easiest to throw all the tiles into a pile and draw from it instead of taking the time to shuffle the stacks. Players need to organize the stock tiles, stack coal tokens, and separate resource cubes. There is a lot to do, and luckily those chary to set it all up should soon decide the game is well worth the time to put it all together. It’s a chore, but the game is great.

I really like this game. If you’re looking for an accessible train game with more complexity than Ticket To Ride, or more stock speculation than Paris Connection, this might be an excellent one to pick up. It’s a beautiful game with many roads to victory. Check it out.

A review copy of Whistle Stop was provided by Bezier Games.