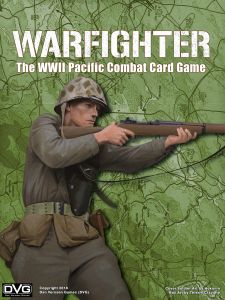 Warfighter: WWII Pacific Combat Card Game is another entry in Dan Verssen’s highly-regarded Warfighter lineup of co-op card games. Do you have what it takes to serve on the front lines?

While Warfighter Pacific focuses on the trials of war, the cards do not depict anything more intense than soldiers holding guns, etc. No blood, gore, or gruesome content.

Warfighter Pacific is a game of squad-based combat carried out via dice and cards. Before each mission, players choose which soldiers they want in their squad and what sort of equipment cards they want to grant each soldier (firearms, grenades, skill bumps, etc.). There is fun to be had here as you customize your squad for the mission. Will you need a bazooka to take out an enemy tank? How about snipers for long-range combat? Will you need a few really good soldiers or a lot of greenhorns? Perhaps a mix of both? These are the types of questions you must consider, and the decisions you make here directly impact the success of your mission.

The flow of play involves taking actions with soldiers. Actions might be attacking, playing a card, moving, etc. After friendly forces have acted, hostile forces take a turn; they might reinforce and attack, depending on their location. Mission objectives can be things like clearing a location of hostiles, eliminating enemy snipers, or destroying objectives. Prepare to lose, especially your first few missions, as you learn how to choose a proper squad. Likewise, prepare to feel like a true commander when you assemble the perfect squad for a mission!

Your first few games may move slowly as you learn the rules and memorize the vocabulary (my solo rounds were 1-2 hours). Thankfully, a 6-sided foldout is included which acts as a handy reference. Attack and turn sequences are printed on the board, as is the attack chart, to help keep things straight. There is also a lot to keep track of, such as ammo, suppression tokens, modifiers, and who can attack whom, and while this is standard for a deep solo experience, it can feel like a lot, especially when you’re first learning.

Warfighter Pacific includes 9 different campaign sheets which represent linked missions. These scenarios let players play out different battles in the Pacific Theatre, which can be a lot of fun. The amount of mission and location cards also means that this game is ripe with replay value. This is a good thing because it will take a few playthroughs before the game experience feels fluid. As if that wasn’t enough, there are a ton of expansions for this game. You’ll actually need to pick up a few if you want to play through all the campaign sheets because some campaigns require Japan soldier cards and American hostile cards.

The components of Pacific are good: the cardboard tokens are thick, and while the cards may not be as slick or thick as other games, they do their job. The artwork, which is mostly pictures taken from WWII, is awesome and helps set the tone for the game. However, the components don’t fit easily back into the box with the insert. Moreover, you’ll need a good number of plastic bags if you want to keep things organized.

I wish the publisher would have included a sample round or two of play in the rules. The rulebook is lengthy, and it could have been laid out much better. It is thorough, which is good, but I had to watch multiple YouTube playthroughs in order to be able to play Pacific properly, which was annoying, especially when games like Root include these walkthroughs in their rulebooks. When I finally was able to play Pacific, it didn’t feel like it should be as difficult to learn as other games I’ve played like Oath or Pathfinders Adventure Card Game, but it seemed so much more of a chore to learn than those games because of the below-average rulebook.

As a wargame, the passion and love is obvious in Warfighter Pacific. As a WWII nerd, I loved all the weapon details, locations, and historical campaigns. The pictures on all the cards are excellent details, and there’s a lot of fun to be had here in playing out the battles the cards portray in your head. It’s great that you can play this solo without having to play both sides of a conflict, and once you learn the game and figure out a good storage solution, set-up is minimal beyond picking your soldiers.

As a general tabletop game, Warfighter Pacific is okay. Unless you’re used to wargames, the cards will feel like there’s too much information on them (think Race for the Galaxy, only with more numbers), and the learning curve may be too steep to hold interest over the 2-3 games minimum it takes to experience this game at its best. Moreover, those 2-3 learning games usually end in losses, which can be frustrating.

Perhaps I’m spoiled, but I was frustrated by the lack of easy-reference card anatomy charts and a full sample round. I did not find the rulebook to be user-friendly, which is all the more irritating because Warfighter Pacific has potential to be a great game if you can stick with it for long enough. I enjoy the Pathfinder Adventure Card Game, and once I learned Pacific, it felt like a WWII Pacific Theatre version of Pathfinder with more of a focus on combat, and that’s a good thing! However, many players won’t get to that point.

At the end of the day, Pacific is a great wargame… if you’ve got the aptitude. If you already enjoy wargames and want a card-driven solo experience, I don’t think you can go wrong with Warfighter: WWII Pacific. If you’re looking to jump into wargames, this could be a good place to start, so long as you’re willing to slog through a below-average rulebook. If you’re wanting a WWII game you can easily get on the table with a non-wargaming group, I’d say look elsewhere. As a wargame, Pacific scores a 8/10 from me, but as a tabletop game, it’s a 5/10.

Pacific is really good solo wargame weighed down by a below-average rulebook.