Choose your dice and set your sails! 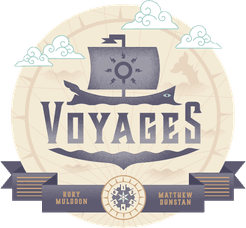 Voyages is print-and-play Postmark Games’ maiden title. It features simple gameplay and simultaneous play in a roll-and-write format. Let’s see how it plays!

Voyages is simple at heart, and that’s a good thing for a print-and-play game. Players sail around the map and acquire goods, crew, and items, all for the sake of obtaining the most gold.

A player begins a round by rolling 3 6-sided dice. All players then use the results to set their direction, sail spaces, and complete cabin chores, assigning 1 die result to each of these 3 categories. If players don’t like the die results, they can cross off 1 of their sailors to add +1 or -1 to a die result. For example, if a 1, 4, and 5 were rolled, and I really wanted a 6, I could cross off a sailor to change my 5 to a 6. To all other players who didn’t cross off a sailor, the 5 would still be a 5. Players then draw a line in the appropriate direction, covering the appropriate number of spaces, and cross off cabin chores on their player sheets.

As players sail around the map, they pick up additional sailors, items that make sailors heroic, legendary stars, goods to sell for coins, or combat the Dread. Because all players use the same 3 dice for their actions, I worried that there would tend to be a best choice and that at the end of the game, players’ sea routes would look largely the same. This does happen sometimes, but often, player decisions come down to personal strategy: do I go for the sailor first or the trading good? Do I set myself up for a great turn next round or settle for a decent turn now?

As of this writing, Voyages includes 3 maps. The “Trade Winds Blow” map feels more like a merchant’s game, “Marauder’s Reef” feels like a pirate-hunting game, and “Cold Dark Depths” feels like an ocean adventure/research game. They all have their pros and cons.

“Trade Winds Blow” is the standard map and it’s great for teaching new players. This map includes the Dread, which, if defeated, grants a good chunk of coins. There’s also goods scattered across the map that players can pick up and sell at ports. My favorite part of this map is gathering a ton of goods and cashing in big at a harbor. Of course, the Dread is a must-defeat for any self-respecting buccaneer, but defeating the Dread doesn’t guarantee you a victory.

“Marauder’s Reef” is all about defeating the marauders for gold coins. The trading element from “Trade Winds Blow” is removed, but there are many upgrades players can check off for their ship that will help them defeat more marauders. The new feature in “Marauder’s Reef” is that, instead of having to land on marauder ships to defeat them, players can defeat marauder ships that are within their line of sight. When learned, “Marauder’s Reef” is actually a simpler play than “Trade Winds Blow,” and it presents more obvious best-choice moves. That’s not necessarily a bad thing, but I prefer the other 2 maps. However, it is satisfying sailing around and leaving a trail of defeated marauders in your wake.

In “Cold Dark Depths,” players will sail through 4 different regions in order to discover sea creatures, all the while trying to not get destroyed by the ice or creatures. The more creatures a player discovers, the more gold coins they will receive at the end of the game. However, the creatures can damage ships in their region, so players must proceed carefully. If a creature damages a player’s ship, the player could gain a negative effect, perhaps permanently. Cabin chores help protect ships against these negative effects, and ports help players gain permanent positive effects for their ships. As someone who loves sharks, whales, and sea monsters, “Cold Dark Depths” is my favorite of the 3 maps, but I would still recommend “Trade Winds Blow” as a starting point. Navigating the ice and dangerous sea creatures can be tricky!

Postmark Games provides a couple different ways to print the maps. You can print full color, which looks the best, or low-ink. What’s nice about this is that as long as you have printer ink, you’ll always have enough sheets for however many people are playing! Postmark Games also offer digital versions that you can download and draw on using a tablet, so you could play Voyages completely paper-free!

As far as simultaneous play games go, Voyages is most like Qwixx, but it offers nuance that is more on the level of Cartographers. If you enjoy simultaneous gameplay and/or a sailing theme, Voyages is worth a look, especially at only $6. I don’t think print-and-play games will ever be my favorite, but Voyages has become my go-to roll-and-write. It is first on my list when I want a quick, simultaneous game with pirating adventure, and it holds up well to consecutive plays. There’s also some good roleplaying fun to be had here if players are willing to tell stories about their routes at the end of games. Check Voyages out here: https://www.postmarkgames.com/

Voyages is a quick, engaging roll-and-write that holds up to multiple plays.