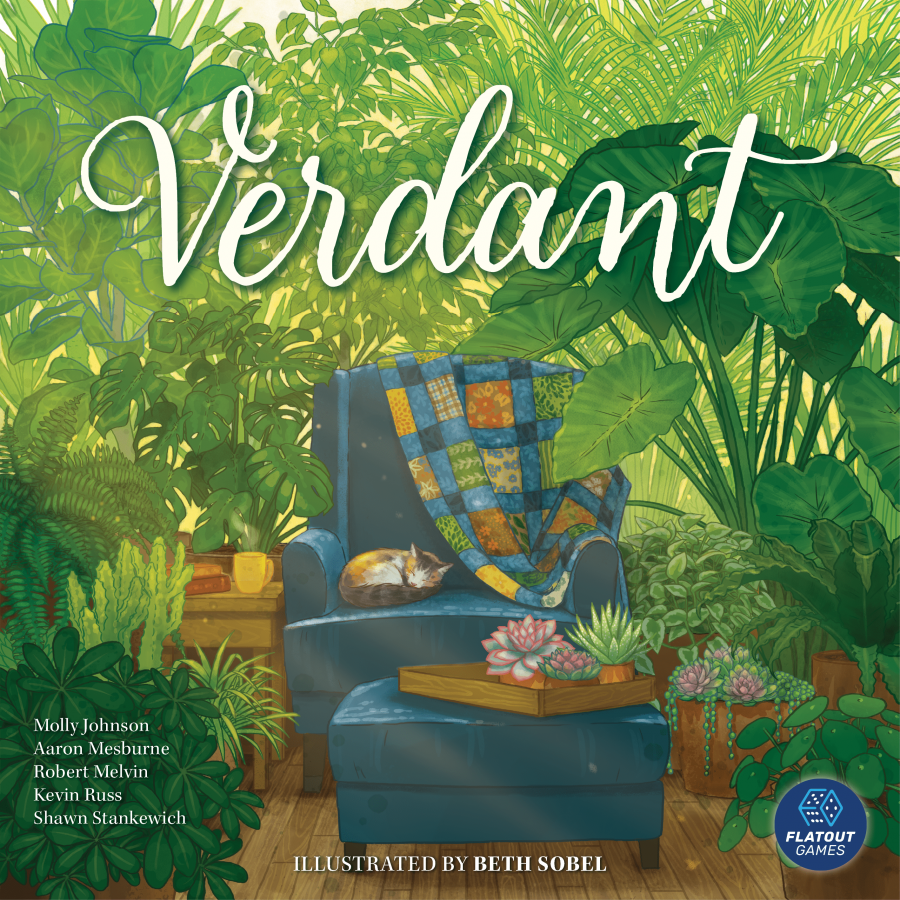 Flatout Games has made a name for themselves, especially in the extremely narrow category of “draft a tile/card and play it into your tableau.” After Calico caught everyone’s eye and then Cascadia won the Spiel des Jahres, Flatout has returned with Verdant, a card (not tile!) drafting game with mechanisms similar to both of those prior titles. But do we really want more of the same? Let’s take a look! The components of Verdant are quality, though I don’t care for the color scheme. Unsurprisingly, everything is too green, but I don’t really love the room colors either. That being said, there are many components – two decks of cards, both wood and cardboard tokens – and they are quality make. It was also a fantastic, unobtrusive way to promote diversity with the green thumb tokens, which have thumbs that come in all different shades of white, tan, brown, and black. There’s also a nice scorepad and plenty of player aids. But putting it beside Flamecraft at the same price point, it’s hard to see it as the same value. But so few games are below $50 these days that perhaps I am being too harsh.

In Verdant, players take turns selecting a card and a token, much like the tile/token setup in Cascadia. (I am a bit surprised Randy Flynn is not listed as a co-designer on this title.) Cards that aren’t taken accumulate “green thumbs” which can be used much like the nature tokens in Cascadia. However, while you can wipe all the tokens, you can only wipe cards that don’t have green thumbs on them, which becomes a bit clunky, as those are often the cards you want to wipe. They can also be used to add “verdancy” to plants.

What’s verdancy? When players take cards, plant cards act like “tickets” or “contracts” in many other games, requiring a certain number of verdancy to score. These can be gained from tokens but are primarily gained from making connections with the room cards, when the room card provides the kind of shade that the plant desires. To make all this work, players must build a 5×3 grid which must alternate rooms and plants in a checkerboard pattern. On top of this, there are ways to score for variety of tokens icons, as well as room and token colors. This is without mentioning the advanced goal cards. Seems like too much? It is.

While turns are simple, this game has the same problem as Calico. There’s too much to think about scoring-wise, and it’s too easy to get analysis paralysis, or to get so in your own head that you aren’t really playing against your opponent. Furthermore, because just about everything scores, you spend too long thinking just to score one extra point. Yet, despite seeing all of this complexity, there’s not that much variety, as things mostly score the same each game. What made Cascadia work was its beautiful simplicity combined with its variability; Verdant sacrifices the first and only creates an illusion of the second.

To put it simply, unless you are a botanist or just a deep lover of plants, there’s no real reason to play Verdant while Cascadia (or even Calico, but mostly Cascadia) exist. Components, art, gameplay accessibility – Cascadia beats out Verdant in every single category, and the gameplay is too similar to really justify the existence of both. If you aren’t huge on Cascadia and prefer the brain burn of too many scoring rules intersecting at the same time, I would still play Calico over this one, though that may just be the theme and color scheme. Regardless, Verdant isn’t an awful game, but it’s incredibly far behind its predecessors.

Verdant's convoluted play and scoring make it pale in comparison to Flatout's other titles, Cascadia and Calico.