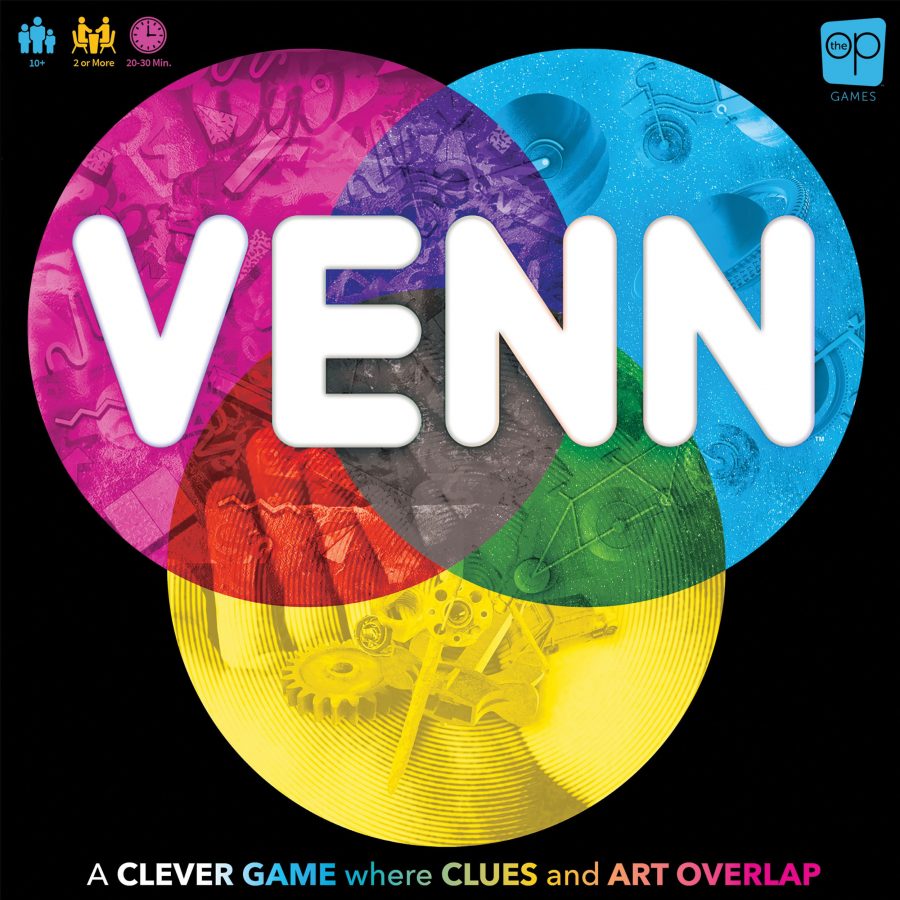 I’m a mathematics professor, which means that I am intimately familiar with Venn diagrams. Yet I can’t say that I ever thought to use them to make a party game! In Venn, two teams race to figure out what the three areas represented in a Venn diagram represent, while each team’s cluegiver informs them with various picture cards. Is it any fun? Let’s take a look! While you can intuit a lot about the game simply from its setup, let me explain in detail. Each round, two competing teams have their own layout of 3 circles making a Venn diagram. They secretly receive a card with 3 numbers 1-12, corresponding to three different words out of 12 from a fixed list seen by both teams. Each team’s cluegiver for the round then begins, in real time, laying pictures in various parts of their respective Venn diagram, trying to help their teammates identify the three words. When one team is ready, they shout “Venn,” and each team guesses their three words. You get one point for each correct guess, but if you get all three and shouted “Venn” before the other team, you get a bonus point. The game ends when a team reaches 12 points.

It’s a very simple game, which makes it great for social gatherings. I taught it to students (math majors) at a picnic and we were up and running in no time. But there’s a flip side to that, which is that playing with a bunch of overanalytical perfectionists meant the first round ran way too long; both sides wanted to be absolutely sure they knew all three words before shouting “Venn”. I think the rules should probably a set a time limit on each round, maybe 5 minutes.

Actually playing as the cluegiver is quite tricky, but I think this is mostly just a learning curve. At first, your impulse is not to use the overlapping areas of the Venn diagrams at all, simply from “brain muscle memory” in similar games. But after repeated plays, you can begin to think of clever ways to use them. You can also cover cards up; presumably this is to eliminate mistakes or get people back on track, but it can be used in clever ways past that. We had “flexible” in prior rounds and kept getting confused on that versus “delicate”; I took a card we had basically permanently associated with “flexible”, made sure they saw it, then covered it up clearly intentionally, as a way of saying “NOT flexible”.

On one hand, you get this chance to be clever because there aren’t very many photo cards to look from, even though they’re double sided. On the other hand, by the end, I was running out of ideas. The rules say to split the pictures between the two teams; I think another nice rule would be that once someone reaches 6 points (halfway), have the teams swap their photo stacks just to rejuvenate the game a little.

One last thing I’ll comment on is the components. They’re quality, and the game is priced really well at $24.99. And the photo cards are the right size to see the details. But that means it’s nigh impossible to stack the photos very well on the Venn diagram, whose circles are far too small. If you want two different cards in each the intersection areas, forget it. It’s a large hindrance in an otherwise great box of components; I think they should have probably made the circles twice as big, even if they had to fold over to fit inside the box.

But ultimately, the game is intriguing and fun, and it feels different than the many, many tangentially related word/picture/party games. That is getting harder and harder to do, and a feat all on its own. It could use some more polish, but I look forward to playing it again.

Venn is a great concept that needs just a little more polish.