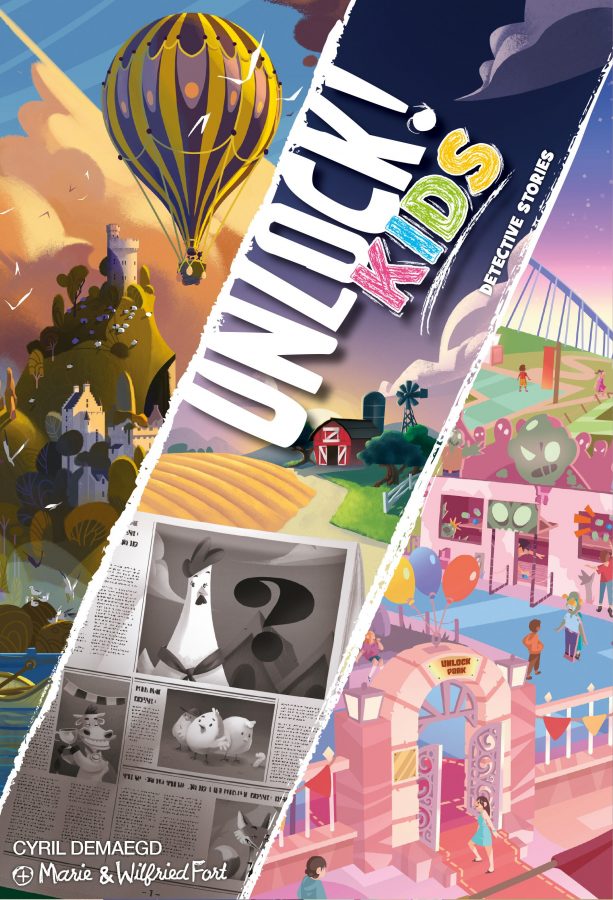 I remember one of my first years teaching at Taylor University, I suggested we take our freshmen Problem Solving students to an escape room. “What’s that? Sounds kind of creepy,” I remember hearing. Now, at least pre-pandemic, escape rooms are a common and popular form of entertainment, and board game designers have tried to replicate this idea in the home. The most successful series in this regard are likely EXIT and Unlock!, which is now here with a set of scenarios designed for kids. I played all six scenarios with my 8-year-old daughter. How’d it go? Let’s find out… 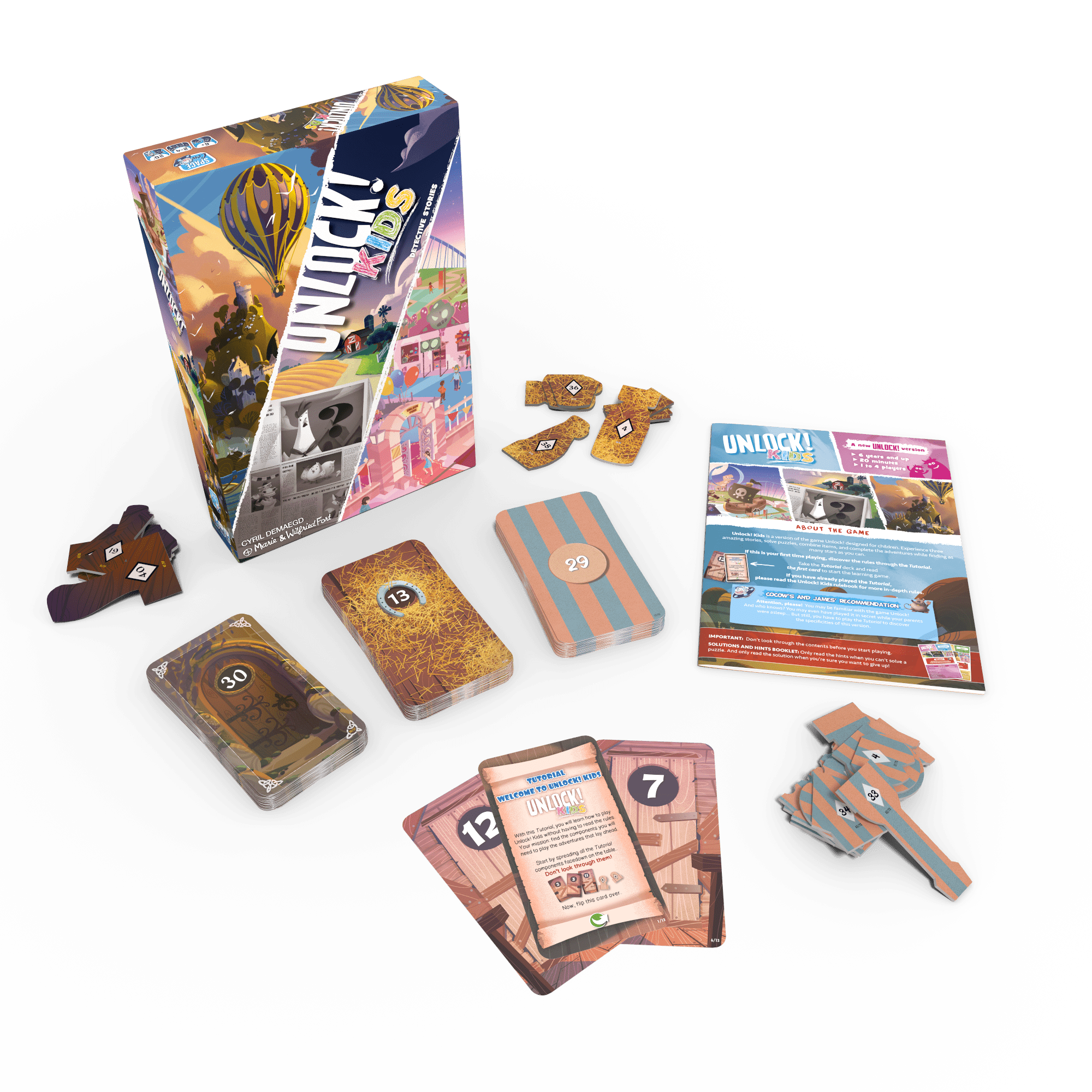 Adults will likely have no problems with the content of the box, and most kids won’t either. But for concerned parents, there are fantastical elements, such as “proving” that a ghost is real after encountering it, along with skeletons and zombies and the like. I had no problems playing it with my own 8-year-old, but others may feel differently.

I’m going to assume you are somewhat familiar with the Unlock! series; if not, we have reviewed several past releases. There are two main differences with this one. First, the app is not used and is replaced with a key card system. Rather than combining blue and red numbers, players combine tokens with cards to create icons that correspond to new cards or tokens. Second, it is now never a requirement to find hidden numbers to progress, they simply exist to increase your “score” (up to 7 stars). I hate trying to squint for the hidden numbers and it is by far my least favorite thing about Unlock!, so I consider this a huge improvement. As for the app, I think the tactile element of combining tokens and cards is incredibly fun for my daughter, and I also view board games as quality time away from the iPad or Switch, so I’m glad to see it removed.

Another change that’s more philosophical than mechanical: there is very little text on the cards, other than a paragraph of introductory and congratulatory text at the end. Despite this, the creativity of the puzzles is truly astounding, and my daughter loved this game. Every time we finished a scenario, she begged to play another one, even though it was usually past bedtime. Once we finished them all and I explained we were going to lend them to a friend, she said “We have to keep it forever!” and I asked what the point was, since we had seen them all, and she said “Maybe I’ll forget the answers!”.

As a parent, watching my daughter grow, learn, and problem-solve at this age (she’s eight and about to enter third grade) was pure joy. I generally held back and let her try to solve the puzzles, only chiming in with hints when she got frustrated. There’s also a fantastic manual of hints and solutions that comes included in the box, if a parent is also having trouble. And can we talk about the value!? There are six scenarios included in the box instead of the usual three; each deck comes with two.

My complaints are very minor, but they are just barely keeping me from giving this game a perfect 10. First, it’s great to see two scenarios per deck of cards, but figuring out which cards kicked off the scenarios and which parts of the hints/solutions manual were relevant (the hints, at least, were sorted only by deck, not by scenario) was kind of confusing. The bigger issue is that at least on one of the key cards, we knew for sure what half of the icon would be, and only one object on the key card used that half of a symbol, so we were able to “metagame” and skip half of the scenario by knowing we needed that card. My daughter was insistent we do it that way and I wasn’t about to punish her for lateral thinking, but I definitely consider it a (small) design oversight.

But complaints aside, this is one of the greatest board gaming experiences I’ve had with my daughter. This game should be on every “Top Ten Games to Play With Your Grade-Schooler” list out there. I can’t wait to see the next one and play it with my younger daughters as they grow.

One of the best board games for kids, ever.