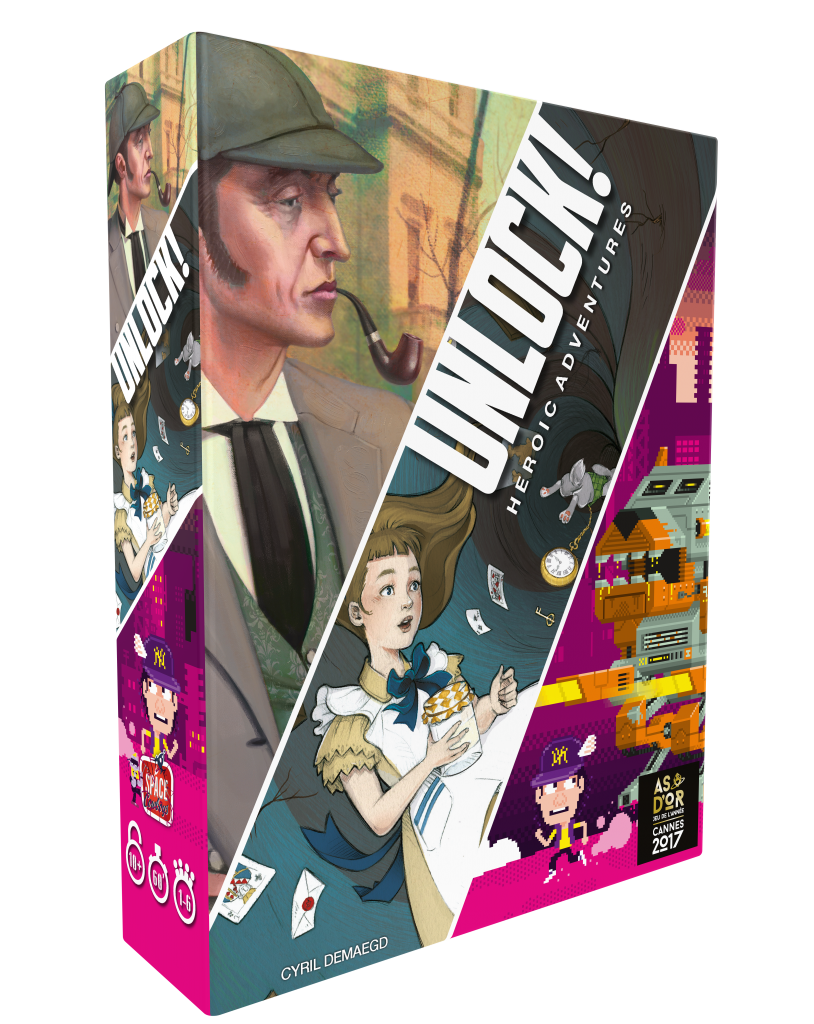 Not long after the advent of Escape Rooms in popular culture, board game companies started trying to emulate the idea at home. The two most successful attempts have been the EXIT series and the Unlock! series. Unlock! uses an app together with a deck of cards, and usually come out in groups of three individual small boxes – but this time, all three scenarios are loaded in one big box. But are they any good? Let’s find out!

The three scenarios are based on classic video games, Sherlock Holmes, and Alice in Wonderland. I don’t recall any sexual content other than some very vague implications in Sherlock. All three are somewhat violent; the Alice in Wonderland scenario involves beheadings (in a very comical, tongue-in-cheek way) and Sherlock’s scenario is involving a murder. Given that the game’s puzzles are also rather complex, this is probably for teenagers and up.

It’s always difficult to review these scenarios without spoiling anything, but I will do my best. First, if you haven’t played Unlock! before, its unique angle is that there is heavy integration with a free smartphone app. The app os how you get hints and keep track of the time in the game, but it’s also used to enter codes and to use “machines” that require you to solve puzzles on the phone. Nothing is torn up or thrown away like in the EXIT series, so these can be replayed or passed on to others.

These new sets use the app in new ways; two sets require you to hold the phone over a couple of cards while a camera is up, which then “reveals” information in the way that many escape rooms use blacklight. It’s a nice touch, but the second scenario to use it doesn’t give any instructions about it, so you may want to play these in ascending order of difficulty. The other scenario uses the phone has an ongoing database, you can basically “Google” things (although within the theme you are referencing them inside a huge, old Encyclopedia). It’s really well done and probably my favorite new digital aspect of these scenarios.

The new app integration techniques emphasize the overall best thing about this set of scenarios, which is that the thematic integration is very, very good. For only an app and a deck of cards, each scenario does an incredible job evoking the theme of the scenario, whether through the artwork, the puzzles, or unique little touches that I can’t tell you about just yet.

I also found the difficulty of each one decent, and overall it’s probably the strongest trio of scenarios released. My only minor complaint is that I really grew frustrated with the final puzzle of “In Pursuit of the White Rabbit” – I knew what to do but couldn’t physically do it. I have a feeling it would not be an issue if I had not been playing solo, and if you really get that stuck, solutions are available on the Space Cowboys website. I also really wish the card sizes for the entire series were considerably larger; sometimes it is too difficult for 3-4 people to all squint around a few tiny cards. I fear that ship has sailed, though.

Each prior trio of releases seemed to have one dud; I assume that is why they are now forcing players to buy all 3 in one big box. At first I was upset at such a notion, but all three scenarios are strong, and the box is actually only $30, 2/3 of the former price (previously, each set was $15). This is a fantasti c deal on a great trio of scenarios, and absolutely the best place to start with Unlock!, and an automatic recommendation to veterans.

Thank you to Asmodee North America for providing a review copy of Unlock! Heroic Adventures.

This might be the best set of three Unlock! scenarios to come out at once, and they're released together at a new, very competitive price. I would tell anyone interested in "escape room in a box" games to start here.