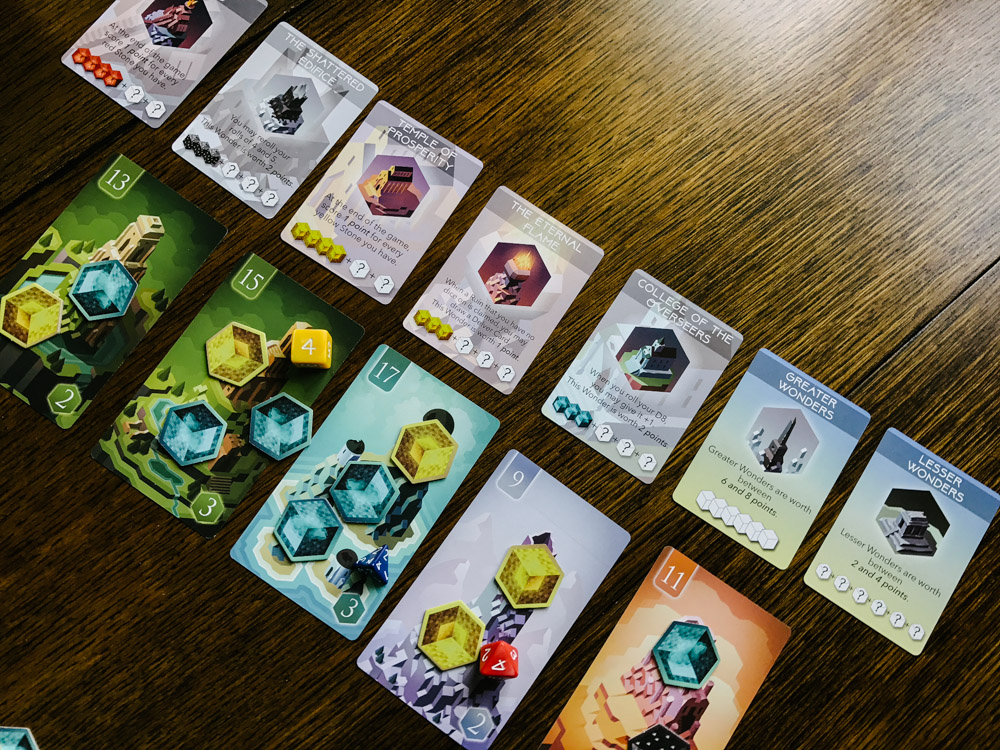 The tools of a Delver tribe.

The goal is simple. Players represent one of four Delver tribes who explore the ancient ruins of ancestors long past. These tribes determine that unearthing old monuments and restoring them to modernity will have a salubrious effect on their clans. This process is represented by players choosing the desired ruin and one of their five dice, rolling said die, then a la Smash Up or Guilds of London, waiting for the number on the ruin to be reached and exceeded by counting all dice present. The player with the highest total present on the ruin takes the card and adds it to their hidden collection of ruins.

Rolling a number lower than four means a player also grabs a stone of his choice from the selected ruin. These multi-colored stone-hexes are used alongside spacial awareness to create legendary wonders. Each wonder has a specific set of stone colors required in order to construct it. Some wonders grant a special ability while others pay out big points for diligent stone collection.

Once the ruin deck is emptied, players reveal an event that takes effect until the remaining ruin cards are claimed. These cards have a variety of effects, but once the final ruin is claimed, the game ends. Players receive bonus points for collecting multiple ruins from the same set, a ruin card from each set, and any extra points from wonders they’ve collected.

The many wonders of Unearth.

By no means is Unearth groundbreaking, but it’s certainly fun to play for a number of reasons.

For one, Unearth has unique presentation.

Unearth branches out from typical board gaming d6 flair and opens up the rolling game by including a d4 and d8. Those unfamiliar with tabletop RPGs might be a bit confused on how to read a d4, but this is an exciting and welcome inclusion to the game. Furthermore, these dice look great. Not matte painted, but instead each die color is just off the base color and slightly textured. This makes each roll satisfying and uniquely your own roll.

But it’s not just the dice. Every component of Unearth feels meticulously prepared and created. Each ruin and wonder brings back recent memories of my playthrough of Hyper Light Drifter. Though some might say this art style of wacky colors and modernized pixel graphics might be weighty and overdone, I can’t get enough of it. Stone hexes are like bright power-ups or a collector’s gems used to 100% a video game, or in this case, to increase your score. I don’t love the finish or feel on delver cards (which we’ll discuss in a moment) but each ruin and wonder card are delightfully and noticeably tactile. This is a great touch.

These events change the last bit of the game. I only wish they were in effect throughout the entire game.

But how good is a game if it only looks and feels nice?

My summary for playing Unearth is decidedly: “It’s like Smash Up, but fun.”

I’ve played close to a dozen games of Smash Up, especially in my first year of board gaming. I suppose I assumed I needed to like it because of its popularity, so I even bought up 3-4 expansions. Over time, my appreciation has grown thin and it’s not fun anymore. Every turn is an exercise in analysis paralysis as players’ eyes glaze over while the zombie player repeats his obnoxious combo again and again. “Oh, we’re glad you’re having fun. I look forward to taking my turn ten minutes from now.”

Unearth includes the smashing of Smash Up, but without needlessly lengthy turns and ridiculous combos that crunch like a shoddy Magic: The Gathering netdeck.

We’ve talked about the dice of Unearth and typically a dice rolling game needs some mitigation to avoid the pitfalls that random dice rolling generates. Here, this is done through Delver cards. These cards are played before rolling and change a plethora of dice effects. Sometimes one can adjust all dice of the same value, and other times it means a guaranteed higher roll on a d6. Players start with some of these cards but gather more when they fail to control a ruin, gathering a Delver card per used die. I like these cards, but one is subject to randomly drawing from the deck. This means these cards are extremely situational. One might need an opponent’s die to be lower on a ruin and rerolls that die, only to make it a higher value. These cards introduce more risk to the game, read: use with caution.

Roll your die and choose a ruin!

Dragging on with four players, Unearth is best with two or three at a table. Because the game features so much randomness and multiple wonders are so hard to gather, Unearth is better when it’s shorter. This doesn’t mean Unearth is a bad game, just that I enjoyed it most when we’d finished in 30 minutes instead of an hour.

Now, I don’t typically need every mechanism in a game to make sense thematically for the game to be good, and I’m not drawing the line here either. Ultimately, players are just rolling a die and throwing it on a card. What does this mean in the universe of Unearth? I sure can’t explain it to you. Why does rolling a 1-3 mean I get a stone when a higher number can nearly guarantee control of an area? I’m not sold thematically on Unearth, which is a pity because it’s so beautiful to look at.

When you look at everything surrounding the game, despite the theme not making sense and having to deal with some randomness, Unearth is fun. It’s not going to change the landscape of the hobby, but it’s exciting. Gameplay is smooth and rarely will you need to revisit the rulebook to figure out what happens next. Once players pick the game up, it flows. From this respect, I would choose Unearth over Smash Up almost every time. It’s far more accessible, and the price point is also very affordable. While I’m not sure gaming veterans need a copy, it’s worth trying, and at just under $24, why wouldn’t you?

A review copy of Unearth was provided by Brotherwise Games.