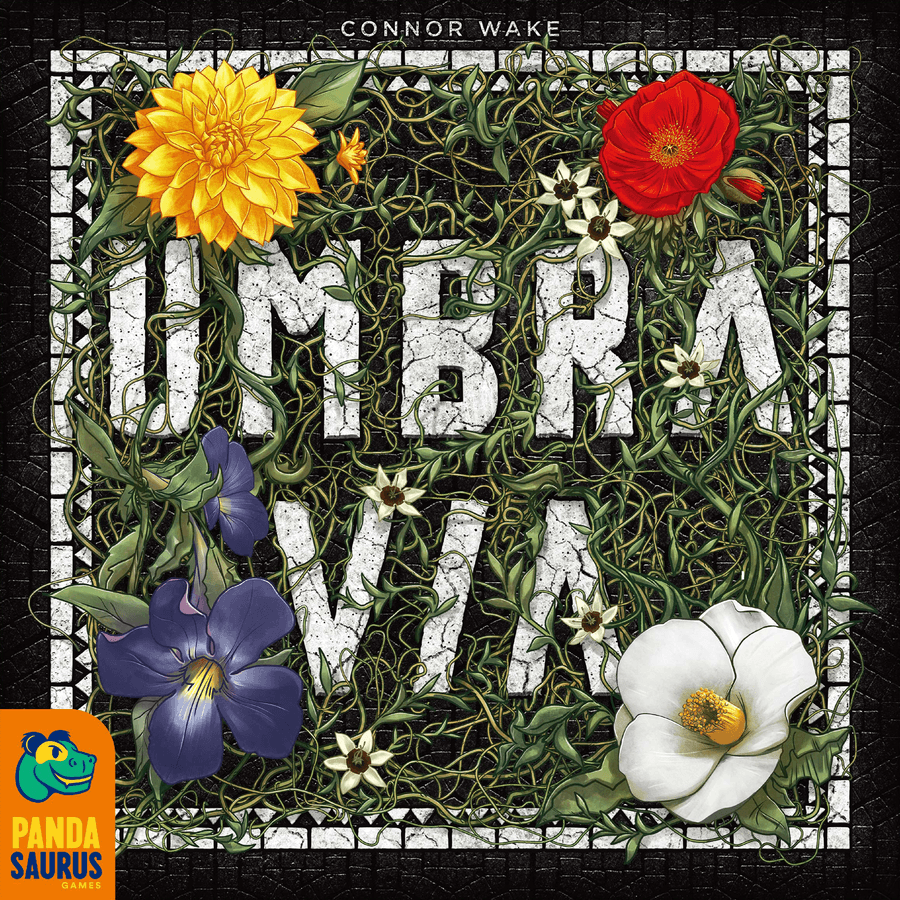 Umbra Via is an abstract game of bidding and tile placement. Using a secret auction system, players draft tiles and add them to a common board to form paths. As paths get completed, players who contributed to them earn points, and the first player to 13 points wins. This game is an interesting take on the auction/bidding genre, wrapped in a mysterious, introspective theme.

Umbra Via takes place in an otherwordly setting in which players are searching for the fragmented pieces of their souls, crafting twisting paths along the way. The game is played on a central board with 16 spaces. Near this board is an auction tableau with 4 path tiles and an area for “soul flower” tokens in each color.

In addition to these shared components, each player receives a bidding track, a player screen, and a token bag in their color. The tokens come in 2 types: the regular-colored “energy flowers” and the pastel-colored “soul flowers.” Some soul flowers begin in the center, and some begin in players’ bags, mixed in with the energy flowers.

In each round of the game, players bid on the 4 tiles in the central display. Umbra Via uses a 2-stage auction system that works like this:

First, all players blindly draw 3 tokens from their bags. Then, behind their screens, they simultaneously assign these tokens to their bidding tracks. By placing a token on a specific space, players are bidding for the tile on that space in the auction display. (e.g. Placing a token on the “III” space is a bid for the third tile in the display.) Once everyone has placed their 3 tokens, they reveal their bids and move the tokens to the corresponding spaces on the auction board.

In this way, everyone gets to see their opponents’ initial bids and learn which tiles others may be interested in. Then, everyone does a second round of secret bidding with 3 more tokens. Once again, these tokens are revealed and moved to the auction board. When the auction is done, the tile display will look something like this:

For each tile, to determine who won the auction, players look at who has the highest bid. Each energy flower counts as 1 point and each soul flower counts as 2. (In case of a tie, players refer to a tiebreaker track.) Soul flowers are then removed from the game and the winner of each auction places their tile on the main board. Tiles may not be rotated, but they need not line up perfectly either. To continue the example above, here is how the board might look after the tiles are placed:

In this case, the tiles *did* all line up in a single path, but they often don’t.

Whenever a path is completed such that it cannot expand anymore, it is scored. An example of this is below:

Here, this 2-length path cannot extend any farther, so a scoring round occurs. Scoring is based on the number of flowers each player contributed to the path; whoever contributed the most gets points equal to the length of the path, and every successive player gets half the amount of points of the player before them, rounded down. In the above example, we see that yellow played the most flowers, so she scores the most points (2 in this case, since that’s the length of the path). All other players are tied for second place, so they each earn 1 point. Had there been a third-place player, that person would have earned nothing.

Umbra Via is an interesting abstract game. I don’t typically gravitate toward bidding games, but for some reason, this one clicked with me. I think it’s because of the way it blends mechanisms together. For starters, the 2-stage auction system is a cool idea, and it gives players unique insight into their opponents’ plans. It’s also clever that the scoring system is tied in with the auction – earned points become tokens that players can bid with. Further still, the game mixes tile placement and area majority in a way I have not seen before, and this, too, ties in nicely with the bidding. Everything just seems to flow smoothly.

Production-wise, Umbra Via looks pretty good, but it’s more minimalistic than some of Pandasaurus’s other titles. Since the game is fairly abstract, though, I suppose this fits. The only issue I found (and it’s pretty minor) is that the blue and purple soul flowers can be difficult to distinguish in certain lighting conditions. Their pastel colors have a similar hue, so people playing in, say, a coffee shop might struggle to differentiate them. Other than this, though, the components all work fine.

The strategy in Umbra Via is trickier than I expected, which made it a pleasant surprise. It also plays quickly, so it’s easy to run back-to-back rounds at a game night. Like most auction games, this one works better with more players, so I definitely recommend it for at least 3, preferably the full 4. If this sounds like a game you’ll enjoy, I recommend checking it out!

Umbra Via skillfully blends bidding, tile placement, and area majority to create a unique abstract strategy game. Check it out!