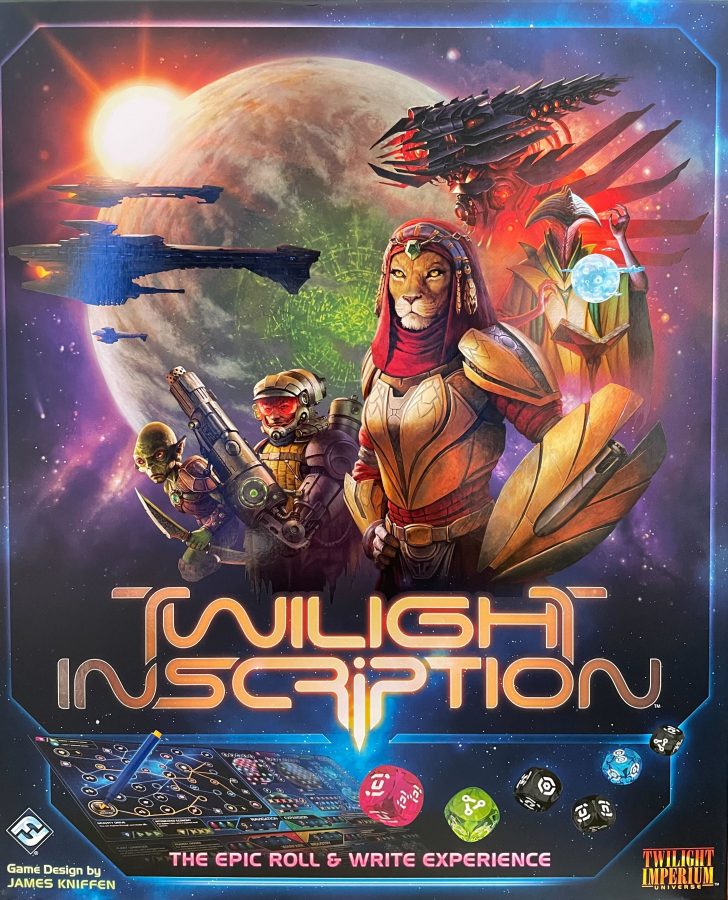 Twilight Inscription aims to be “The Epic Roll & Write Experience,” attempting to condense Twilight Imperium into a 1-2 hour game with the help of dice and a bit of streamlining. If you’ve never had the pleasure of playing the original, now on its 4th edition, it can be an all-day affair as players build out their armadas, take over planets, and make tenuous alliances all in the name of scoring 10 or 14 Victory Points to win the game. So does Twilight Inscription manage to package all that down into a game you can play in 1 evening? Read on for the review!

Does Twilight Inscription offer the same experience as Twilight Imperium (TI4 hereafter) but in a streamlined, quicker package? No. Twilight Inscription still offers players many routes to victory, and allows you to explore, battle, expand, and produce goods while voting on different issues that come up, but it feels a bit more solitary. Your only interaction with other players is warring with your immediate neighbors and voting 3 times. The game is run by a Speaker, but this role is for the player with the most experience to help others, nothing more. The Speaker also flips over the Event cards and rolls dice. Each round is governed by the Event card drawn. If it’s a strategy card with resources on it, players will choose 1 of their 4 boards to use that round. After spending said resources, the Speaker will roll the dice allowing them to spend a few more resources on their active board.

Each board (Navigation, Expansion, Industry, Warfare) does its own thing, but often they feed into other boards, unlocking abilities or power combos. For example, if a player explored (circled) a planet on their Navigation board 1 turn, then they could use that planet to unlock 1 on their Expansion board the next turn. Or they could use it to unlock 1 of the 3 Space Docks, giving them an extra die on 1 of their boards. As players cross out rows and columns on Expansion, they reap the rewards at the top or ends of them, which can unlock abilities on Industry or new ships on Warfare, or they could unlock technologies on any of the player boards.

It can feel overwhelming at first, but following the quick start guide included in the box is quite helpful. You spend dice to unlock new things that let you get better at unlocking things, or more victory points. The downside to the Event Deck running things is you have no choice when it’s time to vote or go to war, and if you didn’t prepare any ships you’ll suffer the negative 1 victory point consequences. It’s also a bit frustrating that you can only go to war with your immediate neighbors. Ships on the left side of your Warfare board fight your left neighbor, and vice versa. There’s no way to attack someone across the table from you if you realize they’re out in front near the end of the game: the only meaningful way to stop them in that situation is voting against how you think they might vote. However, most of the issues you vote on are beneficial either way, so it just depends on your playstyle and if it will benefit the way you’ve set up your Faction.

As far as Roll-n-Writes go, this is definitely the longest one I’ve ever played, and I will say with the Event deck making everything happen at the same time it scales well even with higher numbers, but I wouldn’t want to play with 8.  It ends up feeling more like Roll for the Galaxy than TI4, which I don’t think is what they were going for. Twilight Inscription is good, but it isn’t quite the, “Imperium in less than 2 hours.” It feels like the Airport Express version of a great restaurant – it’s not bad, but I know I’m not getting the same quality experience that I could be getting. I enjoyed it after a few games, but it’s by no means my new favorite Roll-n-Write game.

It feels like the Airport Express version of a great restaurant - it’s not bad, but I know I’m not getting the same quality experience that I could be getting.