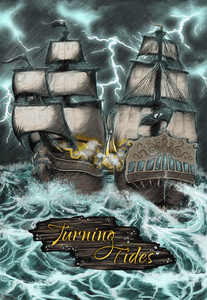 Turning Tides promises simple, strategic hidden-action-selection gameplay with ship-to-ship combat. Is it a veritable pirate’s chest of 2-player shenanigans, or should it be sunk down to Davy Jones’ locker?

In Turning Tides, two pirate captains face off against each other in ship-to-ship combat. Players will play cards and move units around in the hopes of either eliminating their opponent’s crew or damaging 3 sections of their ship.

Players start the game with a wait card in hand (playing wait means that the player chose to do nothing that turn). Wait cards always return to your hand, so you can always choose to do nothing, which adds a bluffing element to the game. To begin each turn, players draw a card from their deck. Cards move cannons, sailors, and captains, fire cannons, and swing sailors. Players each lay their chosen action card face-down and reveal it at the same time. This will feel familiar if you’ve ever played games like Colt Express or even Fantasy Flight’s X-Wing, where players are choosing their actions secretly and simultaneously.

Players then execute their chosen actions however they see fit. The order of action execution is important—perhaps you want to swing across and knock out your opponent’s captain (essentially making them waste a card and a turn), but when you realize your opponent played a fire cannon card, you think maybe you should swing across and knock out the sailor who’s about to fire the cannon so he doesn’t blow up your 2 cannons and sailor.

After players have executed their actions, the ships sail on, and players continue to play actions each turn until the end of the round. At round’s end, the ships swivel around 180 degrees for another pass, which means the opposite side of the ship is now the active side.

It’s fairly simple, but that’s what makes Turning Tides so fun. You don’t have to play this game more than twice to grasp 90% of the strategy, particularly because there’s so few cards, which means that after just a few plays, Turning Tides becomes a sandbox for outplaying your opponent. Rarely will someone win a game of Turning Tides because they knew more about it than the other player, as would be the case in heavier games like Scythe, Twilight Imperium, or Agricola. In Turning Tides, it’s all about knowing your opponent and executing your strategy.

The later turns provide the most tension, when both players have drawn all their cards and both players know exactly what actions are left in their opponent’s hand, but neither player knows if their opponent will play the fire cannon card they’ve been saving or the ever-available wait card. Or maybe you’re taking hits from your opponent now so you can stack the opposite side of your ship for the next round. There’s enough strategy here for the game to remain interesting even after multiple plays.

Outwitting your opponent in these moments is the heart of Turning Tides, and it does feel like two captains would feel, staring at each other between the sails and masts, guessing at what their opponent’s next move is.

Turning Tide’s components are solid. The wooden ships fit together nicely as they sail past each other, and the card stock is good. The sailors, captains, hit tokens, and masts are also wooden, and provide fun targets to aim for. The art on the cards is fitting, and while it’s nothing jaw-dropping, it gets the swashbuckling pirate theme across.

If Turning Tides were to be critiqued, it would be for its lack of meaty depth, but that’s not quite fair. Turning Tides isn’t trying to be a grand strategy game; it’s trying to be a fun, quick, 2-player game about outplaying your opponent, and at that it succeeds. There’s certainly enough meat here for a 20-minute 2-player game. Less of a critique and more of a note: the cards do not have any text on them, so players are required to remember what the drawings mean. They’re intuitive, and there’s only 7 to remember.

If you’ve ever dreamed of a shorter, 2-player version of Colt Express (with a prate theme!), look no further than Turning Tides. Its tight gameplay, hidden-action-selection with the ever-present option of waiting, replayability, and quick playtime have earned it a spot on my shelf. If it sounds like it may earn a spot on your shelf, check out the Kickstarter here.

Never Be Board Games kindly provided a review copy of the game.

If you’ve ever dreamed of a shorter, 2-player version of Colt Express (with a pirate theme!), look no further than Turning Tides.