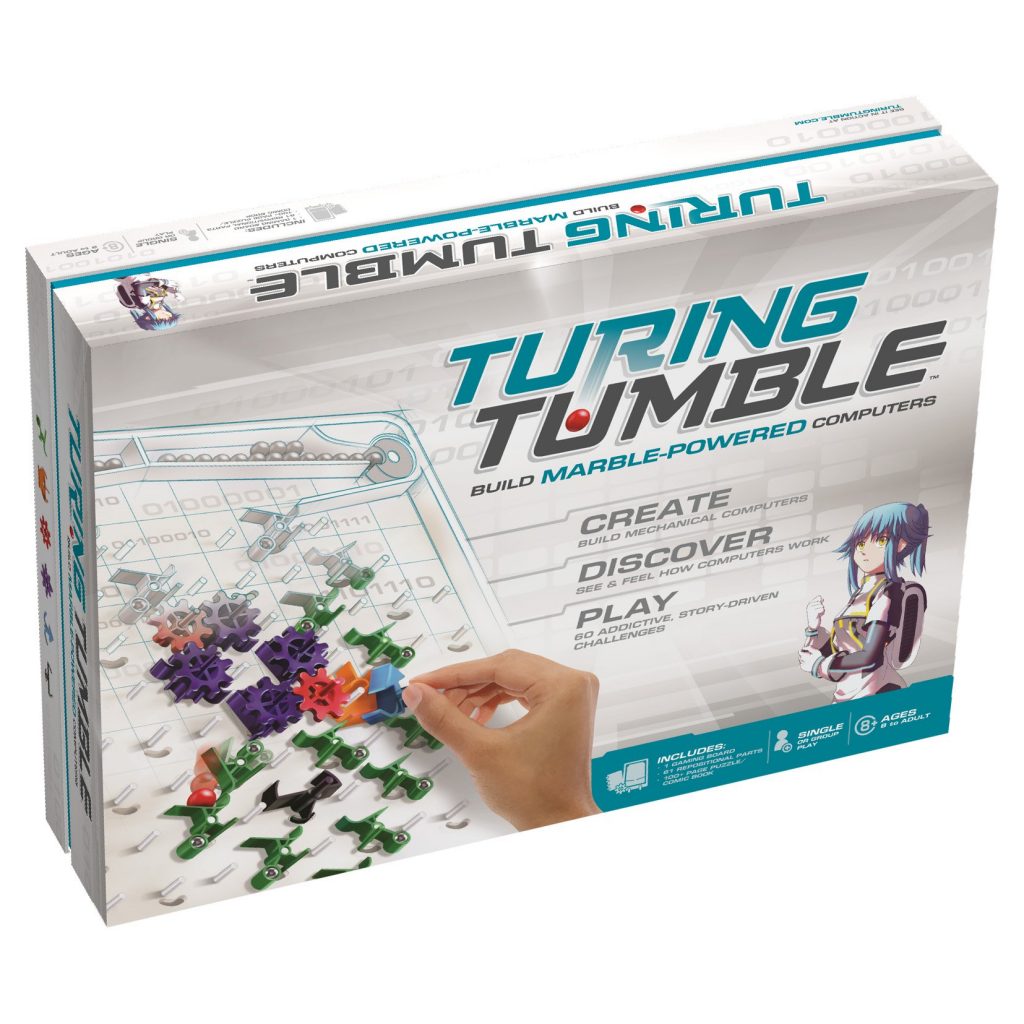 Turing Tumble is an amazing STEM toy, which teaches computer logic and programming. It presents a challenge that is engaging for any age group. It’s perfect for people who want to know how to learn coding.

Turing Tumble is like nothing I have ever seen before. I have been playing logic and puzzle games since I was a little kid, but none have ever amazed, baffled, and hooked me the way this one has. Turing Tumble lets you build working computers using nothing but plastic gadgets and marbles.

Read that again. It’s not an exaggeration or metaphor.

Yes, Turing Tumble allows players to create real, honest-to-goodness computers that can count, perform math functions, and do basic logic—among other things—all with no electricity required. Sounds crazy, right? I could sit here and try to explain how it works, but you really just need to see it for yourself. Here is a video from their Kickstarter:

The premise is simple: make the analog computer generate a certain sequence of marbles. Each puzzle gives a particular setup, a list of available parts that can be added to the board, and a required output. Here is an example of one of the earlier puzzles:

To start, the player first builds the illustrated setup—an incomplete machine. She must then use the available pieces (in this case, two green ramps and five orange crossovers) to complete the system such that it creates an alternating sequence of blue and red marbles. Here is how the finished product will look/work:

This particular puzzle is fairly simple—since they are meant to be done in order, the earlier ones serve merely to help players get started. After that, however, the difficulty scales up quite a bit. The game periodically introduces new components that necessitate entirely different ways of thinking. One key rule is that marbles can never “free-fall,” that is, they must always be transferred directly from one component to the next.

Inside the box are a ton of cool gizmos, a sturdy, upright board, and a thick, spiral-bound book containing over fifty challenges. These puzzles are interspersed among a cool, comic-book story, which really helps to establish a theme. The insert is thoughtfully manufactured, with a spot to hold everything. All in all, Turing Tumble feels like a high-quality item, both in production value and play experience.

Basically, Turing Tumble is what would happen if you put a scientific calculator, a computer engineering textbook, and Plinko from “The Price is Right” in a blender and made a smoothie. (That has to be the weirdest sentence I’ve ever written.)

As an amateur programmer myself, I am amazed by how perfectly this game abstracts the actual functionality of a computer into a tangible, visual format. Turing Tumble can do all kinds of real-life computer operations, such as inputting/outputting information, forwarding, switching, and stopping. For the last two years, I have been learning to code in Python, and this game allows me to see physical manifestations of concepts like if/else statements, breaks, loops, and more. The red and blue marbles themselves can easily be thought of as binary 0’s and 1’s, such that the output is an actual, numerical value. It is not an overstatement to say that, if the board was infinitely large, Turing Tumble could do any computation an electronic computer could.

Solving these puzzles truly requires players to think like programmers—perhaps the highest praise I can offer is that playing Turing Tumble has actually made me a better programmer, personally. If you have ever done any coding, you will understand both the frustration of getting stuck on a multi-layered problem, and also the accomplished feeling of solving it, error-free. Turing Tumble‘s puzzles give these same sensations, and let me tell you, that “eureka” moment feels awesome.

Just like in real coding, this game allows players to periodically test-run a program, to see if things will go awry. (And, just like in real coding, they inevitably will.) It is then up to players to diagnose and address the problems. Even when a program works, the challenge doesn’t have to end there. Players might consider if it can be done differently or more efficiently. For example, one of the puzzles allows players to use any number of green ramp pieces. My initial solution used 28 of the 30 provided, and, though it produced the desired output, the more I studied the board, the more I realized I could make it “better.” By moving parts around and optimizing the routes, I was able to whittle it down to only 22 ramps, ostensibly removing 6 unnecessary “lines of code.”

The gameplay itself is entirely addictive. I live about 10 minutes from where I work, and in the short time that I have had this game, I have gone home on every single lunch break to play it. There were a few days when I didn’t eat lunch at all, because I was so engrossed in these marbles and gears that I just forgot to. Much like a video game that has players saying, “just one more level” until 3 AM, Turing Tumble will have players mesmerized for hours.

I don’t even know if Turing Tumble can be classified as a “game,” but if so, it may be the best game I’ve played in 2018. I am awestruck by what it does, how it works, and the way it makes me think. The goal of any “edutainment” product should be to present complex principles in a fun, engaging, and digestible manner, but many such products simply come across as childish or pandering. Turing Tumble respects players’ intelligence, and pushes them to use their minds in new ways. It is challenging, rewarding, frustrating, educational, and just really, really fun. I cannot recommend it highly enough.

A review copy was provided by Turing Tumble.

Turing Tumble is the perfect toy. It is the most ingenious, creative, clever puzzle I've ever seen.