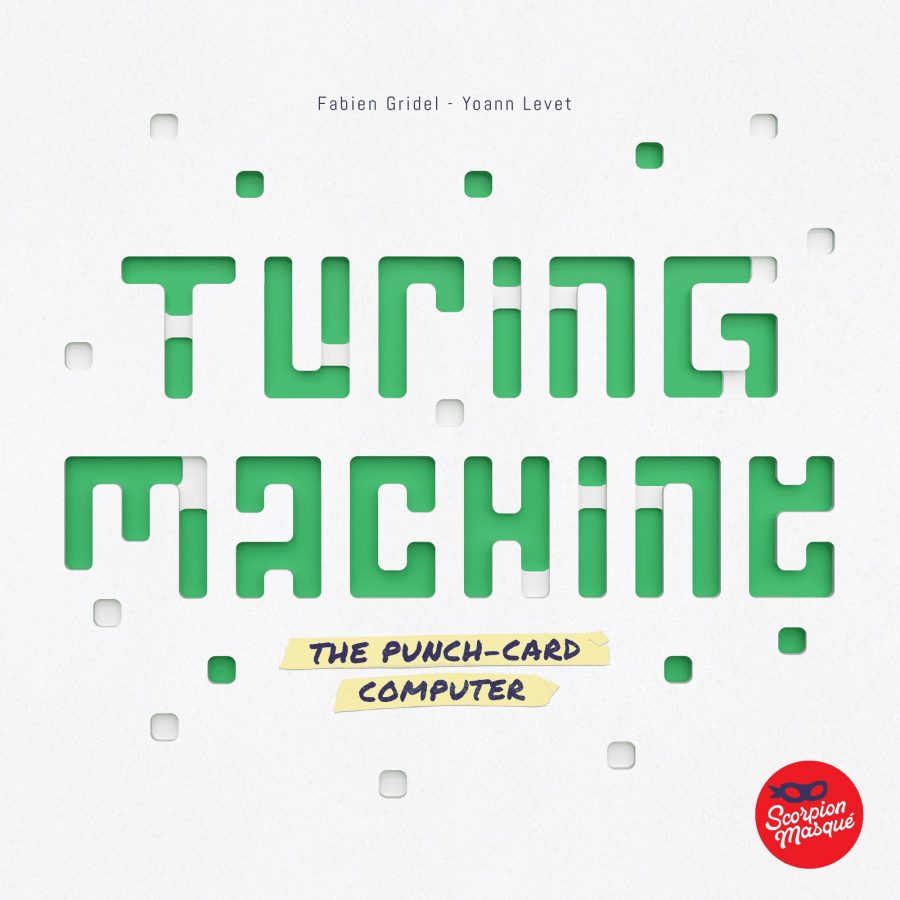 Turing Machine is a game about trying to find a 3-digit numerical code. Each round, players generate a code and test it against an analog “computer” that tells them whether their code does or does not satisfy certain secret conditions. Based on the machine’s output, players make logical deductions and get closer to cracking the code. Ready for some brain aerobics?

Deduction is my favorite game genre, so I was immediately interested in Turing Machine. (I also happen to be a computer science guy, so the theme grabbed my interest even more.)

Unlike most deduction games, in which players ask each other questions to gain information, all questions in Turing Machine go through the analog computer, a central card display.

The goal of the game is to correctly guess a 3-digit code; each digit will be between 1 and 5, inclusive. To begin a round, players each make a code using computer punchcard-style cards with holes in them. When all 3 cards are put together, there will be exactly 1 hole showing through them. Players then use this hole to check their code against up to 3 of the verification cards.

Verifications show a grid of boxes with green check marks or red X’s. If a check mark shows through the hole, then that player’s code meets the corresponding criterion. Importantly, this doesn’t mean that their code is correct, necessarily, but it means that for the single criterion in question, it satisfies the condition. A test might tell someone, for example, that the yellow number is greater than 1, that the blue number is even, or that there are no 3’s in the code.

As players gain more information, they will be able to hone their guesses and close in on the answer. At the end of each round, players simultaneously signal whether they wish to solve the puzzle, using a thumbs-up or thumbs-down gesture. If someone correctly solves the puzzle, they win. Otherwise, any players who guessed wrong are eliminated and the game continues.

It’s hard for a deduction game to wow me, given how many great ones I have played over the years. Any time I try a new deduction game, I find myself comparing it to Sleuth, the game I consider the gold standard of the genre. Turing Machine has a different vibe than Sleuth—it feels more analytical and lacks the direct player-to-player questioning—but the overall experience it provides tickles my brain in the same way.

I like how this game gives useful knowledge right off the bat. After just the first round, players will likely have 3 valuable pieces of information that they can use to make a better informed guess in the second round, and this progression continues as the game goes on. Players will have those satisfying “a-ha” moments when something clicks and their deductions move forward.

First-time players may find it a bit tricky understanding how to interpret the computer’s output (i.e. how a check mark doesn’t necessarily mean a correct answer), but things should start to make sense quickly. To support this, the rulebook provides some helpful examples for folks to peruse.

Speaking of the rules, they are thorough, concise, and organized. The production quality of this game is very high, with a cohesive aesthetic and an intuitive design. The box lid has an amusing Easter egg as well—the top side has a series of holes in it, and when the lid is placed on the box in the “correct” orientation, a check mark shows through. If it is placed in any other orientation, a red “X” shows through, as if to indicate that the lid was put on wrong. Totally unnecessary, but a humorous and thematic touch.

Wow, I love Turing Machine. This game is clever, thinky, and rewarding, and every time I play it I’m left wanting to try it again. Due to its simultaneous play style, this game scales quite well (much better than Sleuth), and it works great even as a solitaire game. If you enjoy deduction games at all, DO NOT miss this one. It’s up there with the best of them.

A review copy was provided by Hachette Boardgames.

Turing Machine is one of the best deduction games out there. HIGHLY recommended.